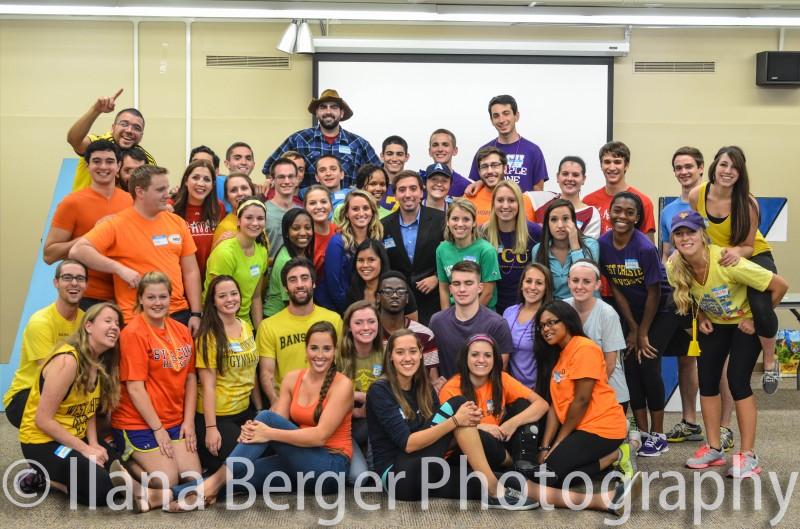 On this past Thursday, April 7, the Abbé Society Nominee Class put on a talent show to benefit women’s health and homelessness while celebrating some of the great talent here at West Chester University. Ultimately the night would produce two winners: one picked by the judges, and one picked by the audience.

Rams’ Got Talent kicked off the night with a dance performance by WCU’s own Swing Dance Club. Three couples got the show started with a jazzy number to “In the Mood,” throwing it back to the 1920’s.
Next up came Gabriella Lo Basso singing “Ghost Town” accompanied by some sharp modern dancing. Directly following was Christina Rothemich doing a contemporary dance to “Fight Song.”

The fourth act of the night was Claire McCarthy, who played piano and sang a rendition of Adele’s “Make You Feel My Love.” Even after a loud disruption outside the Sykes Ballroom, she kept going just beautifully.

Next came two candidates from the Friars’ Society: Tony, singing, and Kevin, playing guitar. They kicked off their performance with a little disclaimer: “we formed our band today.” They then launched into “Crash Into Me,” before transitioning into “Daughters.”

The eighth act of the night was a dancing duo, CJ and Alina, dancing it out to “Pillowtalk.” They actually transitioned from swing dance to this contemporary/hip-hop number, flannels and all.

The final act of the night was the band The Habaneros. However, their keyboardist was running late, so to fill the time, McCarthy jumped in and sang “Fight Song.” Halfway through she remarked “is he here yet?” he asked, and then she kept on.

Still waiting, a member of their band actually jumped up and offered dance lessons in the meantime. The members of the band who were there all joined in, providing the music. He just taught a simple little four-step dance, but the room thoroughly enjoyed it. There was dancing, laughing and just an overall good time.

Finally, after that little interim, the keyboardist made it to the room. All members present, they launched into some jazzy salsa music. It was incredibly catchy and upbeat, and some people were still dancing from the lesson. The eight-person ensemble ended up playing a second song, Selena’s “Como La Flor,” one of the hosts even started a conga line.

After all the acts wrapped up, the audience got to text in their vote, contributing to a live chart up on screen at the front of the room. A pretty solid tie emerged between The Habaneros and Colgan at 28 percent each.

After some technical difficulties with the poll closing, they decided to break the tie the old-fashioned way: by seeing who had the loudest applause. They both received pretty comparable applauses, making it difficult to figure out who was the definitive winner, and so the hosts turned to the judges; they deemed The Habaneros to have the louder applause.

The Habaneros received a cash prize for their victory, which they promptly, and sweetly, returned to the hosts to put toward their women’s health and homelessness cause. Next up was the judges’ choice, which ended up being the Irish Dance Club; they won a gift basket.

In total, the hosts reported to have raised $160 for their cause. Entrance was either $3 or a pack of feminine hygiene products, which they also raised a great deal of.

Lauren Detweiler is a second-year student majoring in English. They can be reached at LD838069@wcupa.edu