Softball off to strong 4-0 start 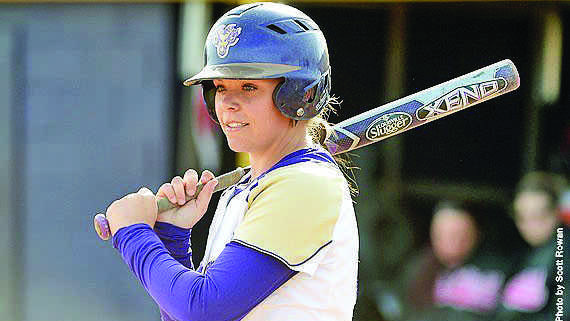 Mudita is the mantra for the West Chester softball team. As Coach Diane Lokey huddled around the team of girls, mudita was the key phrase. Mudita, a word deriving from ancient Buddhist practices, means finding joy in the happiness and success of others. The team shouts “mudita” whenever a teammate overcomes an obstacle or improves on their personal self. This was shouted frequently this weekend as the Rams headed south, defeating their first four opponents. ]

The team awoke bright-eyed and bushy-tailed, eagerly awaiting the official start to the season. After months of lifting, conditioning, running and practicing, the team set off on their three-day trip to Myrtle Beach, stopping for a double header against Virginia State University on the way.

In their first contest of the season, the Lady Rams came out strong and ready to play against the Virginia State University Trojans.

The Rams started producing runs early when leadoff freshman Alyssa Herion got ahold of the second pitch and hit a long ball over the left field fence for her first collegiate home run.

Senior Kat Erb took the mound and shut down the next three innings, holding the score to 1-0.

After shutting the Trojans down in the field, freshman Kelly Tinsman singled, scoring Ashley Flesch to create a 14-0 lead.

Erb would come back on the mound to finish the game in a complete five inning shutout. Erb only allowed three hits and a walk, striking out two at the plate.

Herion finished the game with three hits, one being a home run, and three RBIs. Kelly also had three hits and a whopping six RBIs. Micaela McSpadden, Sara Ercolani and Cat Hammer all added two hits.

Loop’s Pitcher of the Year, Amanda Houck, started on the mound in the second game.

The Rams had a slow start coming off of their 14-0 victory. After a scoreless three innings, Kelly had a big double for the Rams, which moved her into scoring position for junior Sarah Walasavage, who later tripled, scoring Kelly.

Still in the third, there were two runners on for sophomore, Hammer, who came up with a double, scoring both runners which capped the runs at four after the third.

Soon after the Rams took the field, Houck retired the first three batters to infield groundouts.

Sophomore Monica Twardowski led off the fifth inning with a single and then stole second where she was in scoring position for Ercolani. Ercolani doubled, which scored the runner. McSpadden singled, which then scored Ercolani to give the Rams a 6-0 heading into the bottom of the fifth.

With Virginia State producing no runs, the Rams capitalized on it in the sixth inning. Kelly led the rally off with a single and a stolen base. Walasavage singled, scoring Kelly. Herion came up with a huge home run, which tallied two RBIs for her.

After Twardowski and Ercolani both singled, Hammer continued her hot streak with a double, scoring one. The Rams finished the inning adding five runs to their lead.

Houck stepped on the mound to complete the game for the Rams.

Houck was a strong asset to the Rams’ defense. Houck only let up two hits and one walk in six innings. She also had six strike-outs in this complete game shutout against the Trojans.

A few big innings pushed the Lady Rams to an 11-0 victory over the Trojans.

Upon arriving to Myrtle Beach, the Rams quickly got to work against West Liberty.

Sophomore Brooke Harner threw a strong five innings to top off an 11-2 victory. This was the third consecutive mercy-rule win for the Rams.

The Rams finished the day strong against Molloy College.

Kelly reached the bases twice and scored twice with two stolen bases. McSpadden added three hits for the Rams and also scored once.

Houck threw a complete game, picking up her second win of the season, and Erb came in to finish the game.

This gave the Rams the push they needed in the 7-3 victory over the Lions.

The West Chester softball team will play its final two games of the Snowbird Softball Freeze-Out on Sunday (February 21) against both Winston-Salem State at 10 a.m. and New Haven at 12 p.m.

Monica Twardowski is a second-year student. She can be reached at MT814571@wcupa.edu.