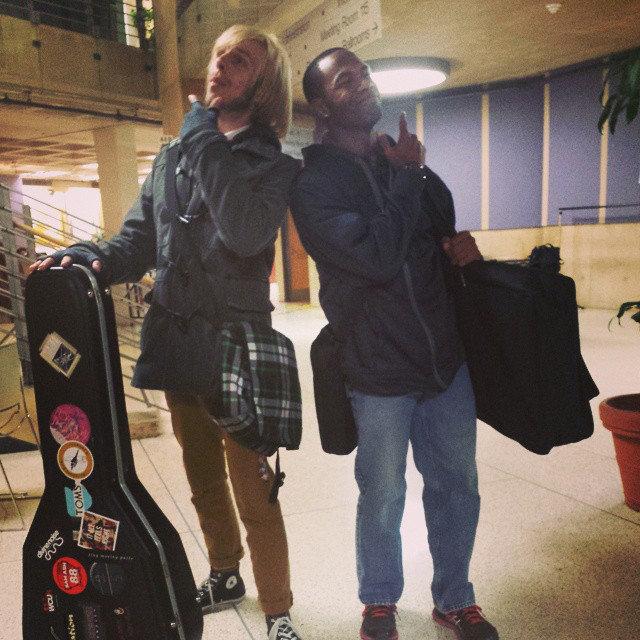 West Chester University senior Jeffrey Holmes started recording/writing their own music in 2013, launching a Bandcamp account with fellow student Reggie Smith one year later. The duo was inspired by acts like Skinny Puppy, Aphex Twin, and Danny Brown, leading to a digital sound drawn from synthesizers of their own making. That same year, Holmes began solo projects, including albums such as “Angel Noise” and “The Work of Morrow,” both of which include tracks featured on multiple compilation albums. “Angel Noise” is primarily a series of sound collages. The single “Oxygen Tanks,” is characterized by what sounds like actual recordings of oxygen tanks in use, but are actually original sounds Holmes produced by sending a synthesizer sound through a filter that cut off its lower end. The later record, “The Work of Morrow” is made up of more focused electronic tracks. The track “At Phoenixville Pike & King Road” includes a sample of the automated voice used on buses to announce stops, and “Isolated Tape” serves as a narrative about a radio station that travels through several distinct genres of music.

“Coldest Night, Longest Winter” is Holmes’ most recent release. The EP dropped on Bandcamp last week, and contains three tracks. Unlike past albums, Holmes opted for a more lyrical approach for “Coldest Night.” In previous works, their voice would be distorted to the point where it became difficult to tell the difference between voice and synthesizer, and in other cases was not included in Holmes’ music. In this EP, however, Holmes’ voice is, while still put through effects, clear and easy to distinguish. This shift is done well, and Holmes meshes their voice to instrumentals with ease.
The opening track, “Trap Card,” is an interesting take on a genre Holmes has not worked with previously. Trap-influenced hi-hats and claps move throughout the track, and help to give added substance to the spacey synths that create the overarching melody. Holmes also sings on this track, but has heavily autotuned their voice, which results in a smooth, robotic sound.

The second track on the EP, “Morning (This is Living),” is closer to Holmes’ past works. The song “Meet Me In The Morning” by Everything But the Girl is sampled heavily. However, while the original song features two vocalists singing in call and response, Holmes layers the voices on top of each other, creating one voice that sounds at times like a strange duet. The sample is also heavily slowed, deepening and smoothing the voices tremendously. At different points in the track, Holmes layers the original instrumentals over themselves, creating immense soundscapes and washes. Holmes also plays guitar on the track, but distorts it heavily so that it is difficult to tell where guitar ends and production begins. This distortion can be found throughout the track, and contributes to a strange, nearly extraterrestrial sound.

Continuing the otherworldly experience and ending this EP, “Purple Squares and White Octagons” was co-produced by Holmes and collaborator Eric Ryan. The track gives the feeling of floating through space, exploring far from what the listener would be used to. Holmes again plays guitar on this track, adding a metal-esque bite to the space-faring synths. The hi-hats and claps found on “Trap Card” make an appearance as well, and help make the track sound more solid among the synths used. Holmes also lends their voice to the track, first auto-tuned and robotic, but finishing with a warmer and more human sound. These vocals are also slightly off-beat, creating a discordant, alien feel.

When viewed in comparison to their previous albums, “Coldest Night, Longest Winter” is less a departure and more of a natural progression for Holmes. “Angel Noise” was primarily centered on sound collage and harsh noise, with walls of sound that at times sounded painful. “The Work of Morrow,” released a year later, made a move toward ambient and vaporwave styles, allowing Holmes to use brighter and smoother synths and production. Both of these albums helped to set a base for “Coldest Night, Longest Winter,” in that the instrumentals and themes explored in past albums facilitated the growth found in Holmes’ most recent release. “Coldest Night” continues the vaporwave trend found in “The Work of Morrow,” but adds industrial and trap influences. This is an interesting shift, as it shows how these three potentially discordant styles of music can come together to create an exciting and interesting album.
Jeffrey Holmes is currently preparing for a recital taking place April 10, which will feature music from multiple albums. I would highly suggest attending, as Holmes’ past performances have been engaging both to the ears and eyes. While their music is not what one would always expect, it is consistently thought-provoking and a treat to experience.

Megan Sabers is a fourth-year student majoring in business marketing. She can be reached at MS789222@wcupa.edu.