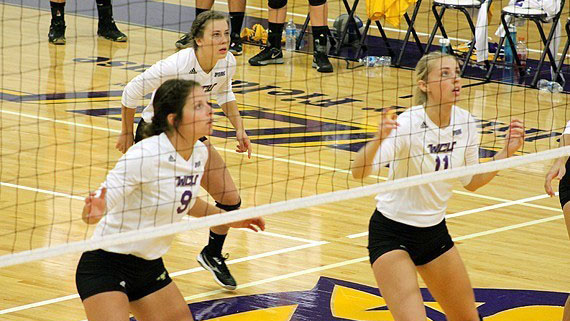 The Lady Rams end their season with a record of 25 wins and nine losses as we are right around the corner from the PSAC tournament, a great time of the year. The Golden Rams were 11-1 at home this season, 10-4 on the road and 13-9 in the PSAC conference.

Their last three opponents were against Shippensburg University, University of Pittsburgh at Johnstown, and Lock Haven University. WCU ended their season with a loss and then two straight wins, giving them some momentum heading into the PSAC tournament.

Going right into the match against Shippensburg University, the Lady Rams were unable to pull off the victory losing by a score of 3-1. The Golden Rams, at first, lost the first set by two, but eventually they came back to tie it up at one set a piece early in the match. Shippensburg would come back to win two straight sets to take the win and remain in second place in the PSAC East, while the Golden Rams sit in fourth with two games to go in the regular season. Some key players in the match were Allie Duffy, who finished second in kills for West Chester with 11, and Marina Sharkey who had nine kills to add as well. Also, Nicky Yates led the team in digs, saving 34 shots and served for two aces on the day.

Moving on to their second to last opponent in the University of Pittsburgh at Johnstown, the Lady Rams came out with an important victory with a shutout of 3-0. A key note about the Golden Rams is that they have won three of the last five matches against Pitt. WCU registered 67 digs and six blocks, playing spectacular defense in its half of the court and limiting the ‘Cats to a .077 hitting percentage in the three sets. Jillian Grammar posted a double-double (32 assists and 14 digs) and West Chester hit .241 for the match to lead the host Golden Rams to a 3-0 sweep. Her older sister, Molly, led the Golden Rams with 11 kills. However, freshman Duffy knocked down 10 kills and hit .571 in the match. Sharkey posted nine kills while Samantha Agostini added seven kills and five assists.

Moving over to the final game of the season, the Lady Rams managed to get back to back sweeps as they defeated Lock Haven with a shutout of 3-0. With this important win, West Chester pulled into a tie for third place with Lock Haven in the conference standings. They had to sweep the Lady Eagles in order to claim the tiebreaker scenario, and they did just that while picking up its first win over Lock Haven in school history, ending their 27-match winning streak in the process. West Chester took the match in straight sets by scores of 25-23, 25-17, and 25-19, taking serious control over Lock Haven. Both of these sweeps were vital in helping the Rams acquire the No. 3 seed in the upcoming postseason tournament. This was also a senior day match as Agostini had six kills in her final home match while Molly Grammar had 11 kills. Marina Sharkey tallied eight kills, and Mandy Flynn served up an ace to close out the match and clinch the win.

I managed to interview head coach Katherine Bellaver and asked her four questions about her Lady Rams.

“Most of the players on the team were on last year’s team that went to the semi-finals, so they realize what it takes to prepare for the playoff match. They are excited about the opportunity to play on Tuesday,” said coach Bellaver when asked about how they prepare for big games such as rivalries and PSAC playoff games. She also talked about her workouts before the season begins, “the team will begin off-season workouts in January. We will have yoga, lifting sessions, and time on the court. I expect every member of the team to give their best effort whether it is in the off-season or the playoff match. We go along with the WCU sports motto that “individually we are good but together we are golden!” Coach Bellaver believes that is the best way to prepare for a championship caliber season.

Marcelus Council-Jones is a fourth-year student. He can be reached at MC785844@wcupa.edu.