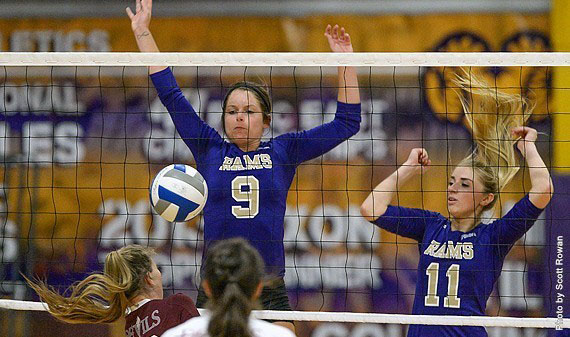 Kutztown fared better in this contest than when they squared off against the Lady Rams on their home court in early Oct., but the results remained the same despite the alterations made to their game plan. Healthier hitting percentages helped Kutztown to keep the match within close proximity in terms of score with the exception of the second set, and they even managed to claim the first set of the game.

West Chester’s first frame folly can be accredited to their inefficient hitting percentage (.116 percent), while Kutztown registered an atypical .290 percent. It’s possible that after journeying on the road for such a lengthy amount of time that the girls had a pinch of the jitters playing in front of their home fans once again, but they used the second period to put that notion to bed. The Lady Rams came out clicking on all cylinders, putting up a robust .516 hitting percentage en-route to a much more WCU-esque performance.

West Chester’s victory over Kutztown helped them to clinch their second straight 20-win season. It also marked the seventh time Head Coach Kassie Bellaver, who notched her 400th career win earlier this season, has won 20 or more games in a season during her nine-year stint at WCU.

Saturday’s showdown against the East Stroudsburg Warriors spawned the same results as Friday, with the Golden Rams sweeping the Warriors 25-18, 25-16, 25-14 in front of 210 fans. WCU’s scoring attack was more balanced this time around, with the top three leaders in kills all finishing in the same vicinity. M. Grammar paced WCU with 12, with Duffy and Agostini finishing with eight and seven, respectively.

The trio of Callie Krajcir (2), Yates (2), and J. Grammar (1), combined for 5 aces, and J. Grammar again did her usual work in the assist department by racking up 29. Yates’ 13 digs led the Lady Rams, with Krajcir adding seven and J. Grammar six.

The Warriors failed to muster up a strong offensive rhythm, with West Chester dominating defensively and limiting them to a .115 hitting percentage compared to the .344% of their own. In the final frame, East Stroudsburg failed to hit the triple-digit ledger, recording only a .062 hitting percentage.

As far as WCU’s statistical leaders go, M. Grammar leads the team with 412 kills on the season, followed by Duffy with 185 and Cruciani with 159. J. Grammar has amassed 887 assists this year, and Yates a team-high 494 digs. Cruciani and Duffy are also top-two on the squad in blocks with the two adding 73 and 52 on the season.

This week’s outlook for West Chester includes home games against Cheyney University (2-22, 0-15,) on Tuesday, Nov. 3 at 7 p.m., Millersville University (14-13, 5-12), on Friday, Nov. 6 at 7 p.m., and Shippensburg University (22-8, 11-6) on Saturday, Nov. 7 at 1 p.m. “Our upcoming games should be good challenges for us as postseason approaches,” stated senior captain Marina Sharkey. “We know how much potential we have, and it’s now or never for us to show it. If we play as a team and play smart, we should be in a position to win every game.” WCU took down all three teams on the road via a sweep earlier this month, and they look to do the same as the end of the season draws near.