Golden Rams off to hot start 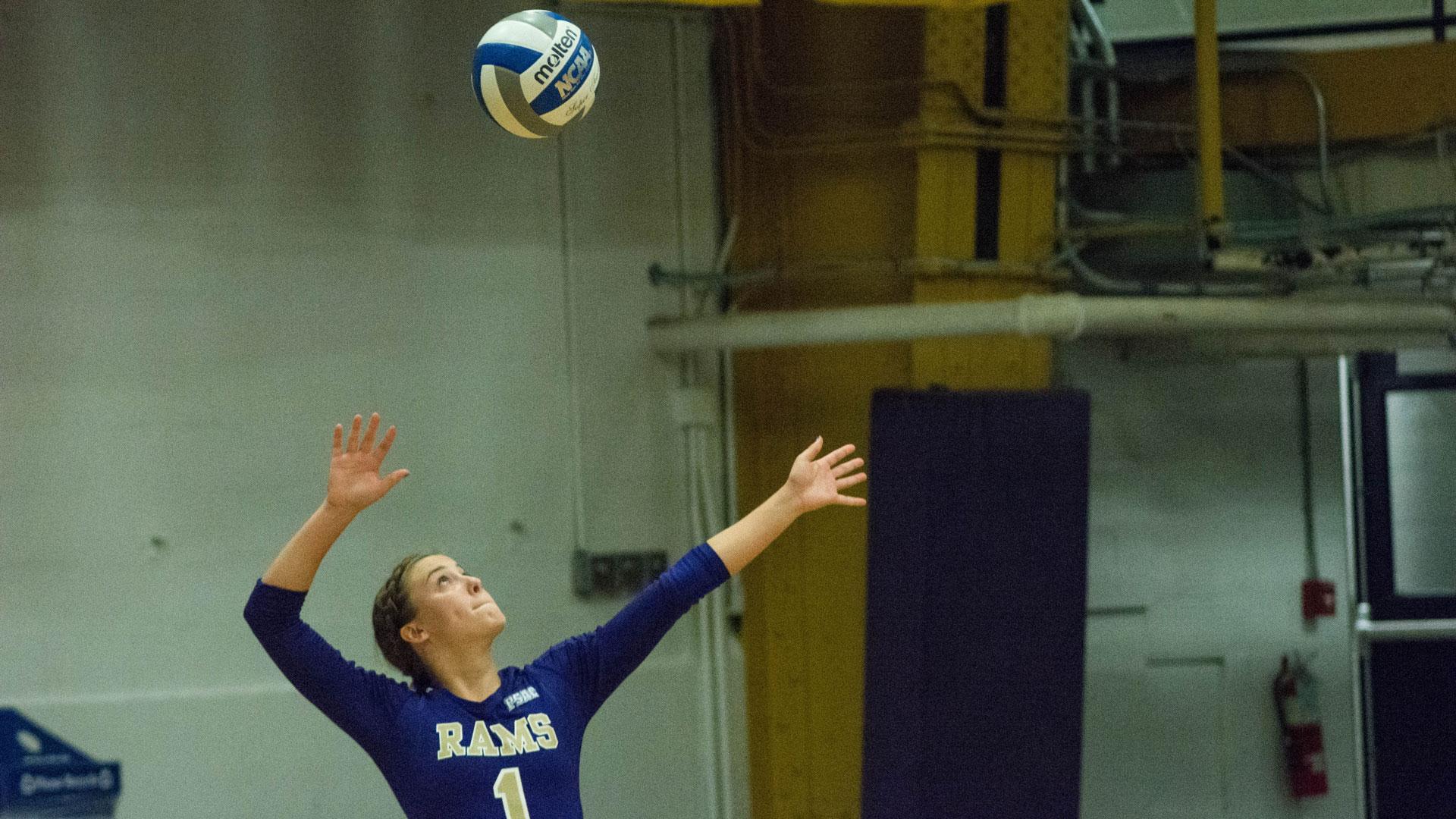 Before embarking to Connecticut for the first game of their lengthy 21-game road trip, the West Chester University women’s volleyball team put on a clinic in Hollinger Fieldhouse Wednesday night as they swept the University of Sciences in Philadelphia, 3-0. Molly Grammer and Allie Duffy powered WCU to the victory as they led the way with 16 and eight kills respectively. Samantha Agostini and Abbie Dischert both chipped in with five and four kills as well. Jillian Grammar did a masterful job of orchestrating things for the Lady Rams, and her mammoth assist total of 26 illustrates that well.

In the first set of the match, West Chester simply exerted their will on USciences, taking a commanding 10-2 lead early on. The fluidity of WCU’s offensive and defensive attack was astounding and it was obvious from the commencement of the match that it was not going to be USciences’ night. M. Grammer stood out like an all-star, setingt the tone early for West Chester with her cerebral play. The first set was merely an illustration of what this WCU team is capable of when clicking on all cylinders, and they rushed to a 25-8 set victory.

The second set of the match proved to be a little more hotly contested, with USciences regrouping from the beating they took in the first set and settling into things, bringing the margin as close as within one point. Despite being within striking distance, WCU was able to keep USciences at bay throughout the majority of the second set. This can be accredited to USciences constant blunders throughout the second frame. Down the stretch of the set, USciences coughed up a point on a bad serve and gave up several more by hitting the ball out of bounds. Again, it was M. Grammer who saved the day when the Lady Rams began looking feeble. She racked up the final few points for WCU as they took the set 25-15.

Most portions of the third set proved to be outliers when compared to the match in its entirety, but USciences fumbled away their best chance of winning the set by reverting back to their faulty ways from earlier in the match. UScience’s Meghan Neff gave WCU a point and tied the set at 17-17 after an attack error, but the Devils managed to muster up enough willpower to claim a 19-18 lead. Despite the late deficit, the Lady Rams rallied and ended the set on a 7-0 run, which included some huge plays from Victoria Cruciani, M. Grammer, and J. Grammer. An attack error from USciences Desiare Lair clinched the set and victory for the Lady Rams, who ,at the time, improved their record to 6-0.

Throughout the course of the match, WCU never once seemed rattled or plagued by a lack of focus. Their attack is very “San Antonio Spursian,” in the sense that everyone knows their role, accepts it, and excels in it. Often times, athletes grapple with fitting into a designated role, but the Lady Rams experience no strife in that department. The Rams are also an exceptional defensive team, whose communication and hard work on that side of the ball make them a frightful foe. Throughout the early juncture of the season, opposing teams have found that out the hard way: gaining a tally in the loss column.

Before their virtuosic showing on Wednesday, the Lady Rams partipcated in Ram Fest, their very own tournament, and picked up four wins over the likes of Bowie State University, Urusline College, Goldey-Beacom College and Holy Family University, before another showdown with BSU on the road. WCU swept every match, with Marina Sharkey leading the way with 10 kills in their first win over BSU.  In their next four games, M. Grammer led the Lady Rams in kills each contest, amassing an impressive 48 in that span. J. Grammer continued to play the role of maestro to a tee, accumulating an absurd 132 assists in West Chester’s first five games of play.

West Chester also swept a pair of non-league matches on Saturday, trumping both Bloomfield and Southern Connecticut in a dominant fashion. WCU’s 18-set win streak was broken when Bloomfield took the first frame 25-23, but West Chester responded as many would expect. They captured the next three sets and took the match 4-1, which earned head coach Kassie Bellaver her 200th career win. M. Grammer and Duffy both poured in more than 13 kills a piece in the victory, and Agostini added three blocks.

WCU then swept Southern Connecticut in three straight sets, with M. Grammer and J. Grammer setting the tone. M. Grammer added another 16 kills, with J. Grammer dishing out 38 assists. Nicki Yates’s impact was felt in both contests, as she added a total of 47 digs between the two matches. Callie Krajcir and Lyndsey Iacobelli combined for 13 digs against SC.

For their strong play, M. Grammer and Yates were both honored with ECAC Weekly Awards. Grammer was named ECAC D-II Player of the Week and Yates was branded as ECAC’s D-II Rookie of the Week. Yates, who is not only WCU’s defensive ace, but lynchpin, as well, averaged 13 digs per set during the Rams Fest tournament, and added 12 and 15 more against Holy Family and USciences respectively.

WCU will have a three-day break before venturing off to Philadelphia to take on Philadelphia University on Tuesday night at 7:00 p.m. The Lady Rams’ record currently stands at 8-0.