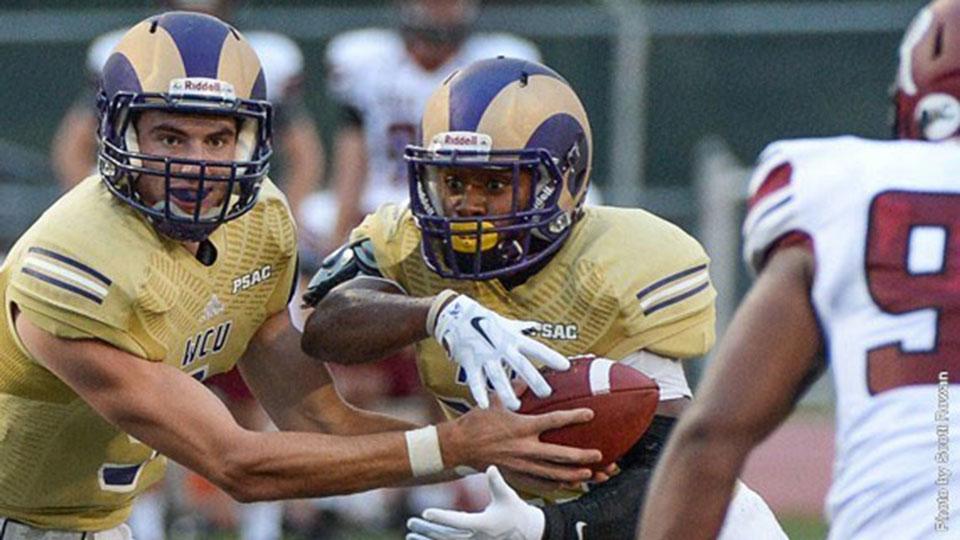 The Golden Rams football team is off to a cold start after falling to Lenoir-Rhyne University and Mercyhurst University, putting them at 0-2 for the first time since 2012.

After another successful campaign in 2014, West Chester University opened their 2015 season at home against the team that ended their 2013 NCAA run, Lenoir-Rhyne. Things looked quite similar to 2013, as the new-look Rams could not contain the Lenoir-Rhyne rushing attack, falling 28-41.

Sophomore quarterback Pat Moriarty was at the helm for the Golden Rams offense, going 18-35 for 231 yards and two touchdowns. Despite the two touchdowns, Moriarty struggled to take care of the ball in his first start, tossing three interceptions that led to Lenoir-Rhyne touchdowns. Wide out A.J. DePietro caught the pair of touchdown passes for the West Chester.

The Rams’ defense couldn’t crack the code to the LRU rushing attack, allowing 422 total yards on the ground. Senior Andrew Cohen, a pre-season all-PSAC selection, accumulated seven tackles and a sack on the defensive line for West Chester, while linebacker Ralph Reeves led the team with 10 tackles.

Although there were glimpses of strong talent on both sides of the ball, West Chester looked a bit off-balance at times. This comes as expected with how many new faces are suiting up in the purple and gold this year.

The Golden Rams looked to bounce back this weekend, traveling to Mercyhurst in search of their first win. The Rams held a 35-31 lead into halftime after a first-half shootout between the teams, but could not seal the victory, after Mercyhurst quarterback Brendan Boylan found the end zone with just 52 seconds remaining, giving the Lakers a 37-35 lead and victory.

Both teams struggled defensively throughout quarters one and two, which lead to the high scoring first half. As the rain increased entering the second half, the style of the game changed into a defensive scrap, with the only points scored being Boylan’s game-winning touchdown.

Moriarty showed improvement in his second start, finishing 12-27 with two touchdowns and only one interception. The rain is a variable no one can control, but Moriarty did a solid job in keeping his cool and improving on his performance last week.

Seven different players caught passes for West Chester on Saturday, yet none caught more then two. Jim Hurley stood out for the Rams’ receiving core, with his two catches resulting in touchdowns.

On the defensive side of the ball, Cohen dominated again with six tackles and two forced fumbles. Sophomore defensive back Kevin Duggan played well for the Rams at safety, leading the defense with eight tackles.

After falling behind 37-35 in the fourth, a series of unpredictable events unfolded. On the two-point conversion attempt from Mercyhurst, the Golden Rams intercepted the pass, returning it the distance, which would have tied the game. But, a questionable block in the back penalty on Duggan negated the return, leaving the Rams down by two with under a minute to play.

West Chester did their best to fight back again, driving down the field in 48 seconds. Moriarty made some key throws and smart decisions, which resulted in a 35-yard field goal attempt to win the game with 1.8 seconds remaining. Fighting the torrential downpour, Golden Rams kicker Ben Solis could not convert on the game-winning attempt, missing wide right, giving Mercyhurst the victory.

This is the first time the Golden Rams have started 0-2 since 2011. Next week the Rams will take on Seton Hill University at home. Last year, WCU dominated the Griffins on the road by a score of 45-10 in week three. The game begins at 1:00 p.m. at Farrell Stadium, featuring another PSAC matchup. Parking lots will be packed early as Saturday is the yearly Hall of Fame/ Family Day event for West Chester.

AJ Arcaini is a fourth-year student majoring in communication studies with a minor in journalism. He can be reached at AA788494@wcupa.edu