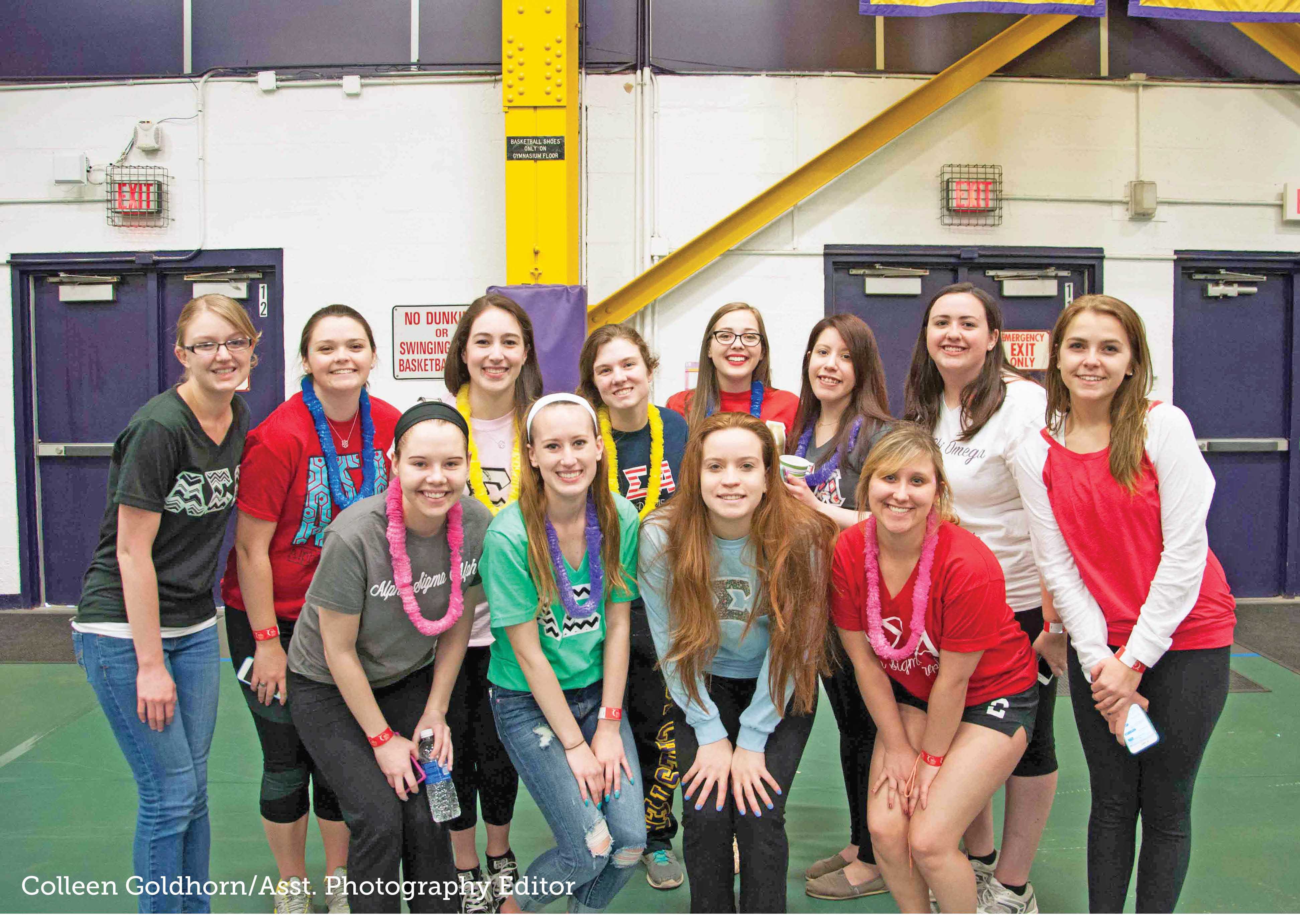 People of all ages came together to fight cancer on Saturday, Apr. 25 when West Chester University’s Colleges Against Cancer (CAC) hosted its 10th  annual Relay for Life in Hollinger Field House from 12 p.m. to 12 a.m.

The CAC, a collegiate chapter of the American Cancer Society (ACS), was in charge of planning and preparing for Relay for Life.

According to CAC Advisor Dave Timmann, also the Director of Sykes Student Union, organizing Relay for Life was a “year-long process.”

CAC President Emily Rooney, who has been involved with CAC since 2012, expressed a similar sentiment. She explained that CAC started working on Relay for Life in the fall, and they even have the date and theme set for next spring’s event.

Timmann was responsible for bringing CAC, and consequently Relay for Life, to campus. He “felt passionate about it because of what [he] went through” in losing his father to prostate cancer and surviving the same disease himself.

According to Timmann, the organization was not originally called CAC and was not always affiliated with ACS.

“I met some folks from American Cancer Society and just got to talking about bringing a chapter on to campus,” said Timmann.

Rooney, who called the CAC executive board “the most supportive group of people,” appreciated working with Amanda Childs, the staff partner at ACS.

“I’m really glad I got to finish out my last year with her. She’s our direct correlation with [ACS],” said Rooney. “She’s our go-to girl for everything. She knows what she’s doing. She’s the spine of the organization.”

This year’s Relay for Life was Disney-themed. The walls were decorated with designs from multiple Disney movies, including characters from “Aladdin,” “Peter Pan,” “The Little Mermaid,” “Frozen,” and “Monsters, Inc.” Some people wore Mickey Mouse ears, while others wore T-shirts featuring “The Incredibles” and “The Lion King.”

According to WCU’s Relay for Life web page, 48 teams comprised of 610 people participated in the event.

Registration began as early as 10 a.m. Although the opening ceremony wasn’t until 1 p.m., people started walking around the gym at noon. Ten laps amounted to one mile, and for each mile completed, people received a miniature foot to put on a shoelace necklace.

Following the opening ceremony, there were a variety of events to partake in, including Disney trivia, KanJam, cornhole, a photobooth, and other arts and crafts such as face painting and coloring books.

Teams ranged from sororities to service organizations to a cappella groups. Many teams had a fundraiser set up at their campsite.  Some of the fundraisers were face painting, manicures, and “bra pong.”

This was junior communication sciences and disorders major Kailey Zeager’s second time doing Relay for Life. Both times, Zeager was the team captain for Circle K, whose team name this year was Circle K of Life to follow the Disney theme.

“It’s a really fun event to bring awareness to cancer and show support,” said Zeager. “It’s also a good way to bond with our other Circle K members.”

The survivor ceremony took place around 5:30 p.m. This ceremony had survivors of cancer talk briefly about their stories and walk a couple laps around the track while everyone else cheered them on.

The luminaria ceremony was held at 8 p.m. This ceremony celebrated those who are currently battling cancer and those in remission, and remembered those who have passed away.

Paper bags with names written on them lined the track and bleachers. The lights were turned off so the glowsticks in the bags stood out.

The a cappella group High Street Harmonix performed several songs, including “Heaven” by Beyonce and “Somewhere Only We Know” by Keane, as the rest of the participants walked around in the track in silence.

There was also a PowerPoint slide that displayed all the names on the luminarias.

Both Zeager and Timmann listed the luminaria ceremony as their favorite part of Relay for Life.

According to Timmann, it was “the most moving portion of the program.”

“The luminaria ceremony is very personal for people, very emotional,” said Timman. “I think it really ties everything together.”

Later in the evening, people took part in Zumba, kickboxing, competed in the costume contest and the newlywed game, and participated in karaoke hour.

The Fight Back ceremony was at approximately 9 p.m. This ceremony, which was Rooney’s favorite part, consisted of participants sharing their reasons as to why they do Relay for Life.

“It’s good to hear other people’s stories to remind you there are so many other people out there who are fighting,” said Rooney.

Timmann enjoyed watching the last hour of the event. He referred to it as “power hour, which is just a big dance party.”

Timmann expressed his gratitude toward those who came out to this year’s Relay for Life.

“I want to thank the West Chester community, the students, for doing this and supporting this,” said Timmann.

According to Timmann, the CAC would like to see Relay for Life “grow to a larger program.”

“The money is just a piece of it,” said Timmann. “It’s really about the awareness and the support that students give each other and give the community.”

Rooney encouraged students to get involved with CAC.

“Keep fighting. Keep spreading the word,” said Rooney. “Cancer is out there, and if we keep fighting, we can find a cure. We can end it.”

Casey Tobias is a first-year student majoring in women’s and gender studies. She can be reached at CT822683@wcupa.edu.