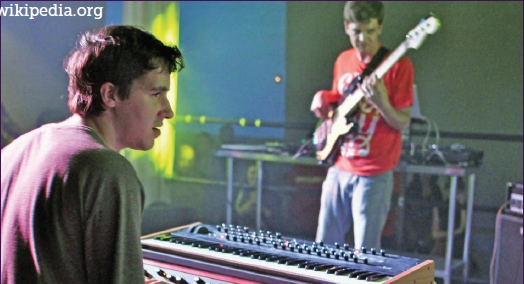 Back in February, Ghostface Killah and BADBADNOTGOOD released their collaborative effort, Sour Soul. As one of the main members of Wu-Tang Clan and a critically-acclaimed solo artist, Ghostface Killah is no newcomer to hip-hop music. If you don’t truly know who the Wu-Tang Clan are, I’m sure you still somehow do. Ghostface happens to be one of my personal favorites from the Wu.

On the other hand, BADBADNOTGOOD is one of the most interesting groups out right now. I remember hearing of them a few years ago when the rap collective Odd Future were really beginning to boom. Seeing a series of YouTube videos with Tyler, the Creator performing a few songs off his album, Goblin, all backed by BBNG was without a doubt a sight to see. After releasing a few of their own albums as well as doing production for some rappers, specifically Earl Sweatshirt, they began to see a glimpse of the limelight.

I first heard “Six Degrees” featuring Danny Brown, a single off Sour Soul, around eight months ago. I was thoroughly impressed. Two amazing artists coming together to collaborate comes with a lot of hype surrounding it. Though this collaboration would have been supremely better if it occurred with Ghostface in his prime, it still manages to keep up decently with the newer material coming out.

Where this album truly shines is the production coming from BADBADNOTGOOD. They manage to make all of their instrumentals come off as if they belong in a 70s western art flick: psychedelic, jazz-infused, and hard-hitting in all the right ways. The true rawness shows through with a larger amount of real instruments than what typically goes into a lot of hip-hop releases these days. The drums are the biggest stick-out item to me. They allow everything to sound so natural and have a true rhythm to it. The snares sound tight, all of the cymbals sound fluid, and the bass hits you well enough not to be masked over.

It’s apparent on this album that Ghostface may be a little past due. Comparing his verses on here to verses off Enter the 36 Chambers, you can tell something’s lacking. While Ghostface is still Ghostface, it seems like the soul has (wait for it) gone sour. Sadly, the biggest standout tracks are the ones that have features.

If you put Danny Brown on a track, you better expect to have a competition on your hands. Danny Brown is easily one of the best rappers in the game currently, after his astonishing release of Old in 2014. Ghostface barely holds a candle to him on “Six Degrees.” While Killah’s wordplay and stories are lacking on this album, he still has the classic flow and emphasis he’s always had. The best thing about him is that he rarely sounds bored, so even if his verse may drag on lyrically, he’ll keep you in your seat listening.

“Nuggets of Wisdom” is one of the biggest solo standouts on the album. Ghostface has clean bars that transition into BBNG doing a fantastic interlude that builds up and transitions seamlessly into the next song. But of course, one of the best non-feature songs on this album is also the shortest, excluding the introduction.

Overall, this album is lacking. Not so much from BADBADNOTGOOD’s end, but on Ghostface’s. I also don’t think it’s his fault. From Enter the 36 Chambers to Iron Man and even Supreme Clientele, Ghostface has made his mark on hip-hop. At this point he’s just overstaying his welcome, but no one has the guts to escort him out. This album has the blueprints to be an instant success: it has a member of Wu-Tang, Danny Brown and MF Doom features, and production from hip-hop’s most innovative group right now. Yet, Ghostface breaks our hearts by not living up to his full potential. Regardless, this adds growth to hopefully more collaboration to come from the Wu-Tang, OG, and BBNG because, while not every song on here is a success, when Ghostface brings the heat, it sounds fantastic. One thing is for certain, these instrumentals need to come out ASAP. Though the Internet may become littered with try-hard, overly-philosophical rappers, these instrumentals are genius, and they make this album worth listening to. In the end, I’m hoping this album has at least some replay value to it, but as a whole, I highly doubt it. All negatives aside, I’m excited to see what both of these artists have to bring to the table in the next few years.

Zach Ritz is a second-year student majoring in communication studies. He can be reached at ZR812833@wcupa.edu.