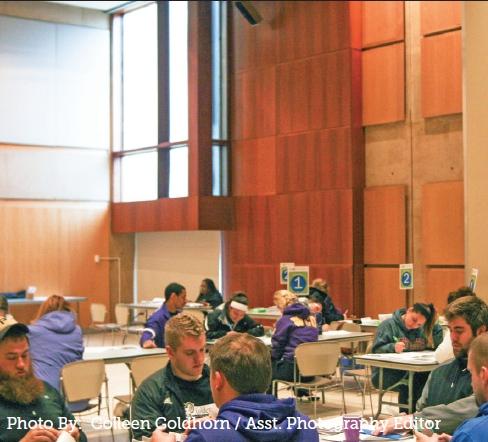 In 2010, Jared Bonacquisti, a freshman football player at WCU, was notified that he was a bone marrow match. He had participated in the “Get in the Game, Save a Life” bone marrow donor registry run by the Andy Talley Foundation.

After being selected as a match, Bonacquisti was able to save the life of Sigitas Sleckus. Sleckus was a 30 year old father. Because of the donation, Sleckus survived blood cancer. Years later, Bonacquisti and Sleckus were reunited at an event held at Villanova University.

This year, students had a similar opportunity. On Thursday, April 9, students were invited to participate in the “Be the Match” program from 10 a.m. to 3 p.m. in the Sykes Ballroom. Students were welcomed into the ballroom, where volunteers would swipe a cotton swab in their mouth. This sample would be used to add them to the bone marrow registry, where they could one day – like Bonacquisti – end up saving someone’s life.

Bill Zwann, the head football coach at WCU, explained that the program started here around seven years ago at WCU when they were contacted by Andy Tally, a coach at Villanova. The first year, WCU got around 400 students to sign up as potential donors. After that, the numbers got a little lower, because once a student is on the list, the sudent doesn’t need to reregister. They typically have between 250 and 300 students register.

Over the years, three football players and one women’s lacrosse player from WCU have been bone marrow donors through the program. Every year, the football team volunteers at the event. This year, the swimming team, tennis team, and softball team also assisted.

If a student is chosen from the registry, they have the right to decline donating. If they do choose to donate, they go for an approximately four-hour procedure.

The medical procedure has changed from what it used to be – sticking a needle in the hip bone to extract marrow. Now, they are able to extract the marrow from the stem cells in the blood. Donors are typically “recovering” for a week.

There is a one year “no contact” period between the donor and the match. After that, the match is allowed to contact the donor if they so choose.

Theresa Kelly is a third-year student majoring in English literature secondary education. She can be reached at TK780615@wcupa.edu.