Can the Bulls stay afloat without Derrick Rose? 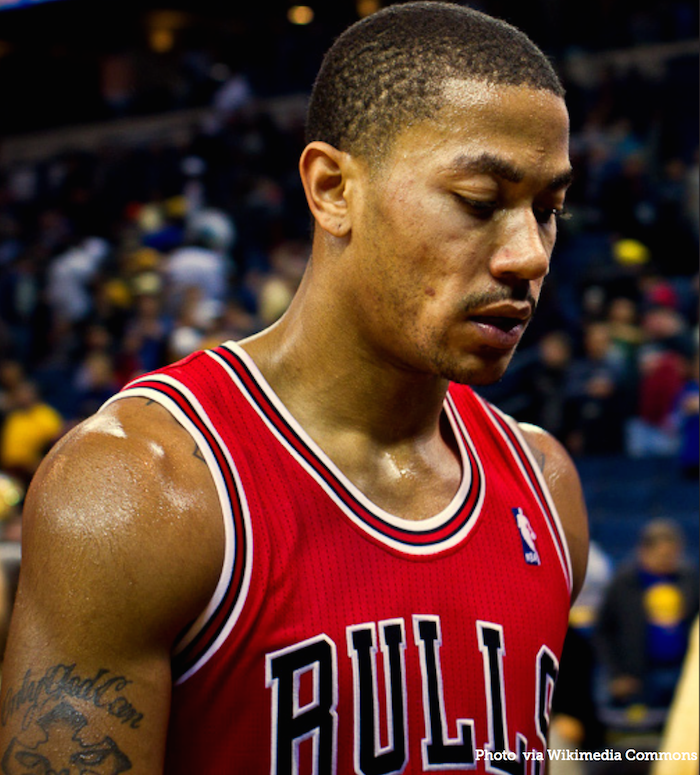 Terrible news struck the basketball world when Derrick Rose was diagnosed with a torn meniscus and would be out for at least four weeks of competition.

Many current National Basketball Association players, including LeBron James, wish Rose well with his recovery.  However, other people have decided it was an opportune time to make fun of Rose and his inability to keep healthy.  People all over social media poked fun at Rose for tearing his meniscus, saying that he should retire.  It must have been infuriatting for Rose, his family, his friends, and his teammates when listening or seeing pictures of Rose clutching his knee.   It was sickening to witness memes and gifs along with other comments  posted on social media about Derrick Rose, because no basketball player ever wants to get hurt.

Practicing and training every day to obtain their goal of winning a championship, Rose and others play the game they love because of their passion and their belief that they are the best players in the game today.  People on social media commenting on Rose’s injury should look themselves in the mirror and wonder what if the roles were reversed?  How would they feel if they tore a meniscus or any other ligament of muscle that takes time to heal?  Granted, Rose is fragile and gets injured easily. However, he is there to win games.  He cannot predict his injuries or when they will occur.  Fans of the sport and others alike should just say positive comments about Rose’s recovery process instead of mocking him.  Who knows?  Rose could return just before the playoffs and have a sensational playoff run with the Chicago Bulls en route to an NBA championship.

However, as Bulls fans might think that their team is done for the year, which they would lose in the first round to an inferior opponent, they still have time to gel and work as a cohesive group to win basketball games.  Not only does Rose’s injury set himself back, but the team’s ability to secure a high seed and face a lower seeded team.  Right now, the Atlanta Hawks, the Toronto Raptors, and the Cleveland Cavaliers all have better records than the Chicago Bulls in the Eastern Conference.  There is still enough time for the Bulls to maintain a high seed. However, it might be more difficult to do so than without Rose.

The Bulls have played countless games before without Rose due to other various injuries, so it’s not like the Bulls are playing without Rose for the first time.  All Stars such as Pau Gasol and Jimmy Butler have complemented this team by creating shots for other teammates, passed the ball to the open man, made clutch shots, and had a will to win crucial and critical games.  The Bulls’ schedule is fairly moderate for the rest of the season, but they have to hope that no other player, starter or second-team unit, would sustain an injury.  If so, their season would flash before their eyes.  The Bulls need to play as a team in order to win the championship and have the pieces to do so, but they need the win games without Rose and plenty more when Rose comes back in order to move far in the playoffs. [pullquote align=”center”]Rose is their clear-cut most valuable player and his play-making skills are what makes this Bulls team a contender[/pullquote]

The Chicago Bulls’ Tom Thibodeau is one of the best head coaches in the NBA because he was an assistant coach for the Boston Celtics when they won the championship in 2008, where he found a way to stop an unstoppable Kobe Bryant at the time.  Thibodeau’s philosophy is defense, and if the team plays better defense, the team’s offense would drastically improve because of the opportunities created, such as steals, fast breaks, and forcing the other team to turn over the ball.

Will Derrick Rose return as the same player as the beginning of the season?  Time will tell.  Rose is their clear-cut most valuable player and his play-making skills are what makes this Bulls team a contender.  The Bulls have the nucleus to defeat the Eastern Conference powerhouses of the Cavaliers, the Raptors, and Hawks.  They just need Rose to help them reach the promised land.

Jared Fortunato is a freshman majoring in physical therapy.  He can be reached at fortunatojared@gmail.com