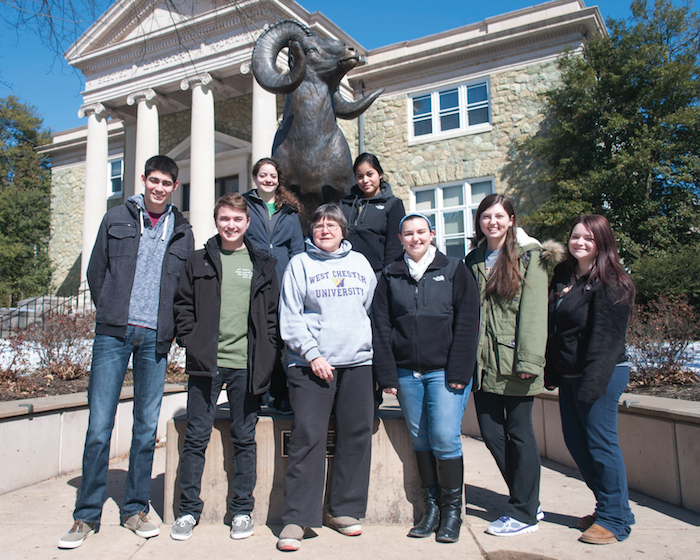 On Friday, Feb. 27, President Weisenstein announced the retirement of Mary Ellen, “Mell” Josephs.  In the email, Dr. Weisenstein wrote, “[Mell] Josephs has provided outstanding leadership to SSI and is well known for her emphasis on “students first.” The following Saturday, Josephs sat down with The Quad for a brief interview about her time here at West Chester University.

Josephs originally started her employment at West Chester University as the Assistant Director of Student Activities. From there, she became the Director of the then newly constructed Earl F. Sykes Student Union, where she implemented the organizational structure under which the union still operates today.  Following the university’s name change from West Chester State College to West Chester University, the then Intercollegiate Governmental Association became Student Services Incorporated in 1986.  Josephs then applied for, and received, the executive director position.  Josephs is the first, and has been the only executive director of SSI.

Currently, SSI boasts an operating budget in excess of $20 million, 24 full-time employees, 203 part-time employees, and 11 service orientated divisions.  Josephs praised all of SSI’s staff saying: “[They’re] a small group of dedicated individuals in very diverse component units that come together every day in support of the University’s mission.”

[pullquote align=”left”]West Chester is my home. But it’s time for me to try something new.[/pullquote]

Josephs has always believed the students should have a strong say in the university’s affairs, and structured SSI with this concept in mind.  She has always held by the concept that “a student can always walk in.” The student activities fee, which every full-time undergraduate student pays, is the primary source of funding for SSI. SSI then disburses the collected fees to West Chester University’s clubs and organizations.  For this reason, Josephs believes every student who pays the activities fee is a “shareholder” in the organization.

Among her contributions to the university, Josephs brought food service operations to Sykes Student Union, gave the SSI bookstore the presence that it currently boasts, developed the Ram E-card for the university, and ran the check cashing and ticketing services.

Josephs also supported and partnered with the Student Government Association (SGA) erecting the bronze ram statue that currently stands on the corner of South Church Street and West Rosedale Avenue. “This project was something SGA was not going to give up on!” she stated.  It took SGA several years to slowly save the funds.   She also supported students who went before the West Goshen Township to get the antenna approved for WCUR, the campus’ radio station.

Former women’s basketball coach, Deirdre Kane, stated: “It is so difficult to quantify the contribution that Mell Josephs has made in the transformation of West Chester University, and for that matter, the borough of West Chester. Her management of student fees and funds generated by university events has enabled the university to become one of the most fiscally sound institutions in the Commonwealth.”

Her contributions also extend beyond the university. In May 2014, with much help from the SSI Bookstore, Josephs opened The Ram Shop in the borough. Ever since the store opened, it has become a popular place for alumni and supporters of the university to stop and visit.

She also served on the Chester County Hospital Board of Directors from 1996 to 2013 and the Chamber of Commerce of Greater West Chester Board of Directors, from 1987 to 1992.  In 2007, the March of Dimes recognized Josephs for her excellence in the Field of Public Service.  She was also a supporter and committee member of the 25th Annual Salute to Chester County Women of Achievement that took place on Oct. 22, 2014.

Linda Lamwers, the Provost of West Chester University, said: “When I arrived at West Chester University from Minnesota, Mell  introduced me to the local community organizations and leaders. During the years I have known her, she has been an incredible university citizen, supporting students from the arts to athletics. Many regard her as one of the  ‘faces of WCU.’”

Josephs’ last day as executive director will be on May 22.  “It’s been a good ride.  West Chester is my home.  But it’s time for me to try something new.”