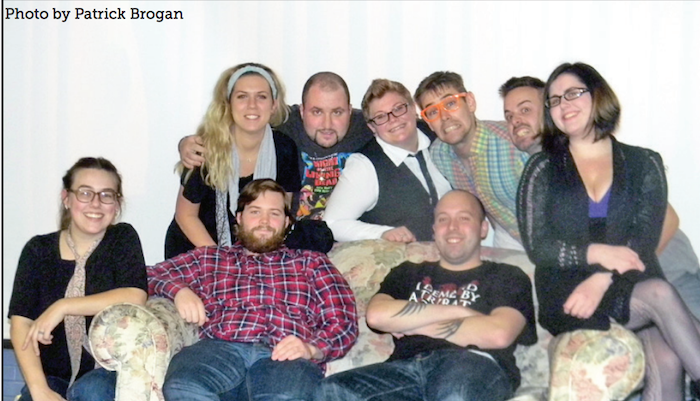 Not unlike its complicated name, Le Théâtre de L’Absurde is a mix of multiple art forms brilliantly fused together in an effort to entertain and inspire.

The newly established and highly capable group of actors, comedians, poets, writers, and musicians are on a collaborative mission to push the boundaries of art and performance by interacting with- and learning from- one another’s crafts and talents.

Founder and producer of Le Théâtre de L’Absurde, Patrick Brogan, a student at West Chester University, was inspired by the Boldface Conference, a weeklong seminar for emerging writers in Houston, Texas.

According to Brogan, Dr. Kristine Ervin, a professor in the department of English and a lover of words, was instrumental to the development of Le Théâtre de L’Absurde.

As an advocate for the collaboration of artists, Dr. Ervin encouraged several emerging writers to attend the Boldface Writing Conference in Texas last year.

“I made friends with people who were from the Houston area,” says Brogan, “and they took me out on the town and we explored different genres of art through performance such as punk shows, underground clubs, and cold readings at a bar– where you submitted your work and then someone else would read it, someone who has never read your work before. This exchange was inspiring. The bar was packed, 250 people came out, and I just came home with that energy of Houston. I wanted to bring that same energy to West Chester.”

In an effort to produce, perform, and encourage artists of several diverse genres to interact and generate new, improvised art without limitations or borders, Brogan teamed up with long time friend, comedian, and former film student at Temple University, Bob Kaplan.

“Last semester, it was hard,” said the gentlemen as they recalled their first semester of promoting Le Théâtre at West Chester University.

“We were lining up people to do the show, and we had musicians but many backed out. However, the people that stayed are awesome and so dedicated to the group,” said Brogan and Kaplan.

In the Fall of 2014, members of Le Théâtre  de L’Absurde produced a well-received and wildly imaginative show titled “Waiting for the Snow: a Night of Lateness.” With 65 attendees, the actresses, writers, directors, comedians, and musicians were able to showcase their unique talents to a huge audience.

“We really tried to get audience members involved,” said Brogan as he and Kaplan.

“That’s what it’s all about,” said Kaplan, “encouraging people to step outside of their comfort zones and experience something new. A lot of first time actors and comedians join Le Théâtre because they crave something exciting and fresh.”

In agreement with Kaplan, Brogan added, “We WANT first timers. We want to remind people that its not so much about the performance as it is about performing.”

The actual act of getting on stage and letting loose allows audience members and performers to relate on a multitude of levels.

“This club, this energy, these experiences will live in the individuals that are willing to put themselves and their work out there,” Patrick stated, “They will be the ones to carry the torch of Le Théâtre de L’Absurde.”

During the first hour of open mic, Melissa DiGiovannantonio read a descriptive and powerful short story titled, “A Eulogy,” where she channeled the voice and emotion of one who has Alzheimer’s disease.

After an hour of short stories, comedy, and a descriptive coming of age tale six local comedians from the Academic Probation Tour commanded the stage.

James Weir opened the Academic Probation Tour with a raunchy set that exposed his inner racist.

Glenn Deery, also known as “The Deery,” joked about his struggles with finding women on online dating sites and living up to his favorite rap lyrics.

Chris Nee, who attended Delaware Community College, confessed that he was on academic probation. His short-lived stint at DCC prompted him to start the Academic Probation Tour.

Bob Kaplan, long time comedian and producer of Le Théâtre de L’Absurde had plenty to rant about including West Chester University’s disproportionate Ram Statue, his dating disappointments, and how he looks at the gym.

Norristown native Alex Magakis discussed his contempt for unruly kids and credits his lack of sexual experience to his inability to escape the dreaded “friend zone.”

The six comedians will continue their tour; their next stop will be the Trocadero on 1003 Arch Street in Philadelphia on Sunday, April 12, 2015.

Tickets may be purchased on Ticketfly.com and a line up of tour dates can be found on www.facebook.com/AcademicProbationTour. You have to be 21 or older to attend all of their comedy shows.

The next Le Théâtre de L’Absurde event will take place at Gemelli-Artisanal Gelato and Dessert Café on 12 W. Market Street, West Chester Pa. The free event is open to the public. The time and date are to be announced.

For more information on Le Théâtre de L’Absurde check out their Facebook page at www.facebook.com/theatredelabsurde and a review of their last show “Waiting for the Snow: a Night of Lateness” written by Emily Brogan at www.kenningjournal.com/creative-people-doing-creative-things-theatre-de-labsurd-at-west-chester.

Angria Pickens is a  fourth-year student majoring in English with a minor in journalism and ethnic studies.. She can be reached at AP765497@wcupa.edu.