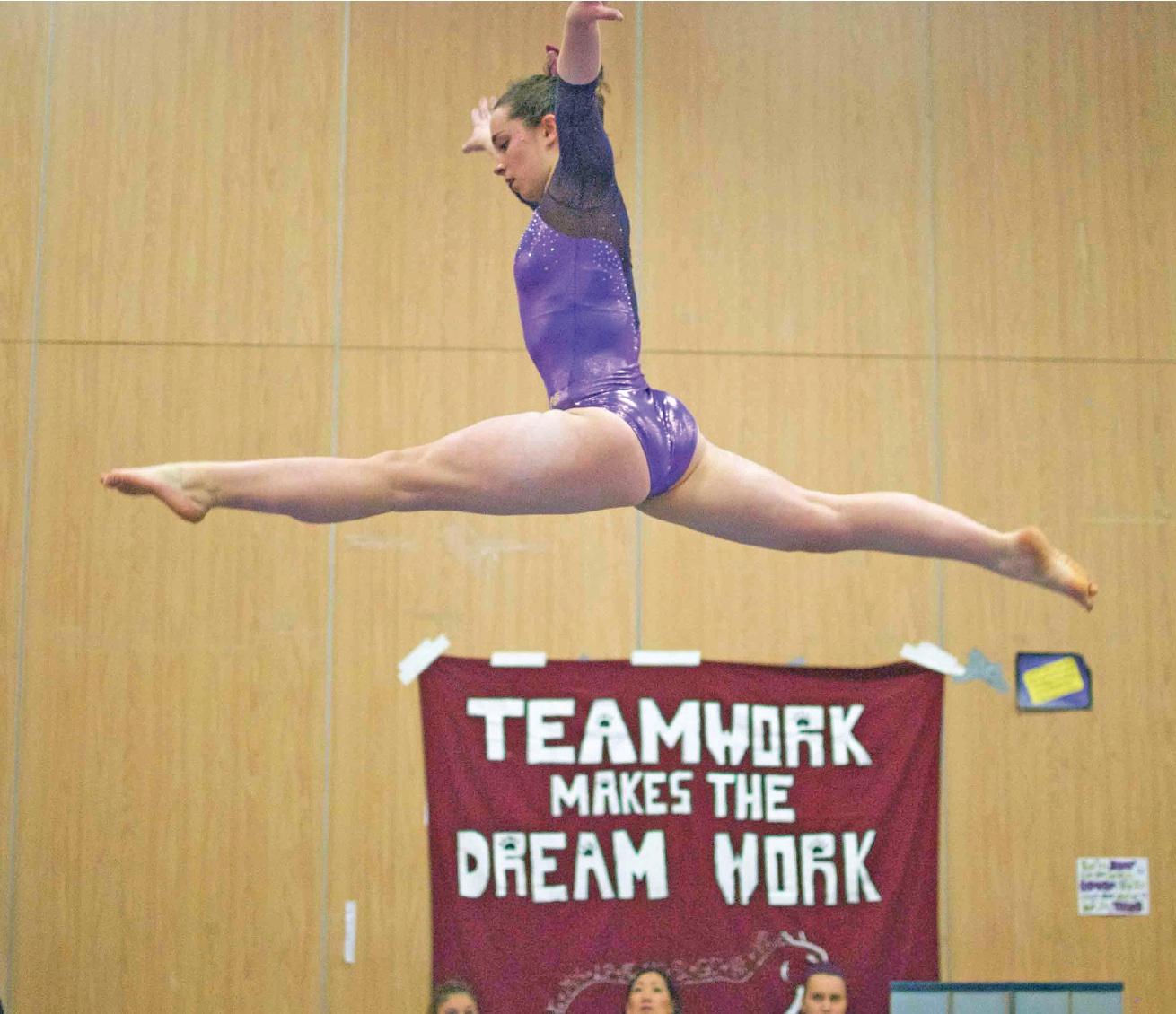 On Saturday Feb. 7, 2015, West Chester University Women’s gymnastics team proved nothing could stop them from achieving their goals in their competition against Ursinus, Rhode Island College, and Bridgeport.  For the first time in school history, the Lady Rams reached a team score over the 191 mark.  The Rams’ 191.825 took a second place finish in the team competition behind Division II rival Bridgeport (194.125).

The overall team score was only one of three records broken on Saturday afternoon.  Sophomore Majesta Valentine of Wilmington, Delaware broke the school record in the all-around competition with a 38.775.  She led the Rams on the floor exercise with a well-deserved 9.80.  Valentine’s 9.75 performance on the uneven parallel bars placed her in third position.  In addition, she placed fifth on the vault with a 9.70 and twelfth in the balance beam standings with a 9.525.

The Women’s Gymnastics Team also had a great performance on the balance beam.  Junior Lindsay Knapp led the girls on the event placing seventh with a 9.60.  Behind Knapp, freshman teammate Rachel Blair posted a 9.575 placing ninth.  Senior Cassandra Ringer also had a clean routine posting a solid 9.425.

On the floor exercise, WCU set another school record with a 48.675.  The record-breaking floor line-up consisted of Madison Brent, Meghan Brannon, Selena Swanger, Alyssa Hult, Lindsay Knapp, and Majesta Valentine.  As previously mentioned, Valentine led the Rams with a gorgeous 9.80 performance on the floor exercise.  Behind Valentine, junior teammate Hult of Fremont, New Hampshire, tumbled her way to a well-earned 9.775.  Close behind Hult, junior Knapp posted a 9.725 and freshman Madison Brent scored a 9.70.

“The girls made a great team effort,” Coach Cordova said, “and really stepped up to the plate.  It was a great day!”

Overall, the girls did an excellent job staying positive and mentally strong throughout the meet, regardless of minor mistakes and the excitement occurring around them.  Up next for the Golden Rams on Saturday February 14th, 2015 at the Ken Anderson Invite in Philadelphia, Pennsylvania was a  meet against Temple University and Bridgeport.

The Golden Rams’ Women’s Gymnastics squad finished third Saturday afternoon inside McGonigle Hall on the campus of Temple University in the Ken Anderson Memorial Invitational.  West Chester scored a 190.575 while ECAC rival Bridgeport won the tri-meet with a 194.375, and Temple was runner-up with a 191.700.

Majesta Valentine placed second in the all-around with a score of 38.500.  She finished behind 2014 USAG national champion Sasha Tsikhanovich of Bridgeport, who Valentine had beaten in the all-around just one week earlier inside Sturzebecker Health Science Center.

WCU started their competition on the balance beam.  They had a rough start with only three out of six girls on line-up hitting their beam routines.  Knapp led the crew on the beam recording a 9.55.  Teammates Cecelia Lorenzen and Selena Swanger were behind Knapp posting 9.525 and 9.50 respectively.

The Lady Rams were able to redeem themselves and come back up in the standings after an outstanding performance on the floor exercise.  Valentine had the team high score on the event for the Rams with a 9.75.  Behind Valentine, freshman Madison Brent performed an outstanding 9.625 routine.  Sophomore teammate Selena Swanger also had a strong performance and tumbled her way to a 9.60.

West Chester headed to vault for their third rotation.  The team got off to a strong start with freshman Rose Wortman’s solid 9.4 performance.  Throughout the vault line-up, the Rams continued to show depth by gradually increasing their scores.  Anchor Valentine led the Rams with a beautiful 9.75 vault.  [pullquote align=”center”]The girls all gave their best effort for the team[/pullquote]

To wrap up the Ken Anderson Invitational, WCU gymnastics finished on the uneven parallel bars.  Despite hard judging and low scores, the team performed well.  Anchor Brannon was the standout on the event swinging her way to a 9.8.  Sophomore Valentine scored behind Brannon recording a 9.70.  Teammate Hult also had a strong performance posting a 9.575.

“Overall, it was a really solid meet,” WCU head coach Barbara Cordova said afterwards.  “The girls all gave their best effort for the team.”

The record setting season for the Lady Rams isn’t over yet! Next, West Chester returns home for their next competition hosting Springfield College on Saturday February 21st, 2015 as their alumni meet.  Come out and support the Lady Rams!  The meet gets underway at 2p.m.  Check back for next week’s issue to see how they did!