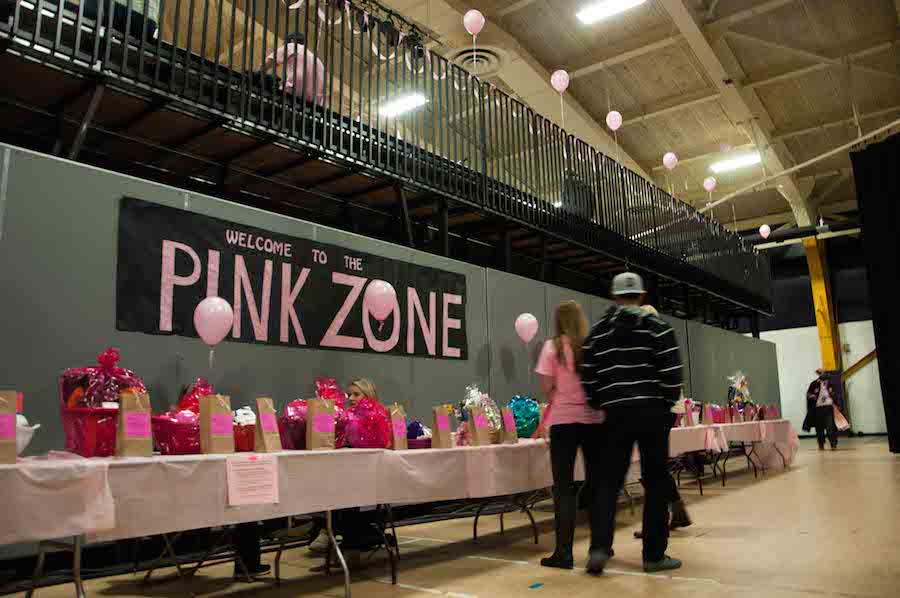 West Chester University’s annual Play 4Kay event took place over this past weekend as many organizations and students participated in raffles and games to raise funds and awareness for the Kay Yow Foundation.

The event was hosted by West Chester’s women’s basketball team in the Hollinger Field House on Saturday, Feb. 7.

Play 4Kay supports the Kay Yow Cancer Fund, which is an organization that is included in finding an answer to fighting cancer for women and support women’s cancer research. The Kay Yow Cancer Fund was founded on Dec. 3, 2007 by Sandra Kay Yow, a former women’s basketball head coach for North Carolina State University. Yow was diagnosed with breast cancer in 1987 and passed away from the disease in 2009.

Play 4Kay is a day for West Chester University students and faculty, sports teams, organizations, and the entire community to come together to help fight breast cancer. The basketball court was a place that felt like home to Yow, so the court is the place where everyone can come together to support a great cause and to acknowledge Yow and her foundation.

To show support, WCU’s basketball gymnasium bleachers were decorated with pink ribbon, pink balloons lined the stands, the tables had pink tablecloths, and everyone was wearing pink t-shirts in the stands. The cheerleaders also supported the basketball team with bright pink pom-poms.

While warming up, the entire basketball team had on pink headbands, pink socks, and pink shirts that spelled out the word “HOPE” and the “O” was replaced with the Ram sign.

Tim Shearith and Paul Rosenberg were two individuals recognized at the beginning of the event in addition to a pink basketball being used for the tip off.

The event raised awareness by using flyers that promoted the involvement in a marathon on Saturday, April 15, 2015 in West Chester, Pa.

Before the game, the National Anthem was sung by 12 students of one of West Chester University’s a capella groups.

The Pink Zone was located behind the bleachers where the games, activities, and raffle tables were advertised. Fans visited the Pink Zone during halftime of the women’s basketball game. Raffle ticket sales included one ticket for $1, seven tickets for $5, and 15 tickets for $10. Funds were raised through face painting and selling raffle tickets, breast cancer t-shirts, hot dogs, pink hair extensions, and tattoos. Food offered included popcorn, pink parfait, pink cake pops, cookies with pink icing, pink cupcakes, pink macaroons, and pretzels in the shape of the breast cancer ribbon.

The raffle baskets ranged from small baskets that contained candy and popcorn to large baskets that contained West Chester University hoodies and t-shirts, gift cards, and Bath and Body Works lotions and perfumes. There were a total of 34 baskets and some of the basket names included “Gottahava,” “Hoop Gear,” and “Dinner and a Movie.” The “Gottahava” gift basket included a $30 gift card donated by Zeta Tau Alpha sorority. The “Hoop Gear” gift basket included a WCU basketball hoodie, a drawstring bag, athletic shorts, and two t-shirts donated by the women’s basketball team. The “Dinner and a Movie” gift basket included a $20 Landmark gift card, two popcorn bowls, a movie pass to Regal Cinema, cotton candy, and Hershey kisses donated by the WCU field hockey team. [pullquote align=”left”]Play 4Kay is a day for West Chester students and faculty…to come together to help fight breast cancer.[/pullquote]

After the game, Play 4Kay had a social at Barnaby’s of America Restaurant and Sports Bar from 6 to 9 p.m. The specials included $30 dinner and drinks for anyone 21 and over and a special for anyone under 21, which included a $20 dinner and soft drinks. The event successfully raised a lot of money in collaboration with the Office of Alumni Relations, Aramark, Habitat for Humanity, the WCU Golden Ram Marching Band, the Women’s Center, SSI, Colleges Against Cancer, and Zeta Tau Alpha sorority. All the proceeds benefited the Kay Yow Cancer Fund to fight breast cancer.

Students interested in Play 4Kay should save the date for next year and join WCU for a day of fun while supporting and donating to women’s cancer. Donations to the foundation can also be made online at www.play4kay.org/goldenrams.

Brittany Donald is a fourth-year student majoring in English. She can be reached at BD760628@wcupa.edu.