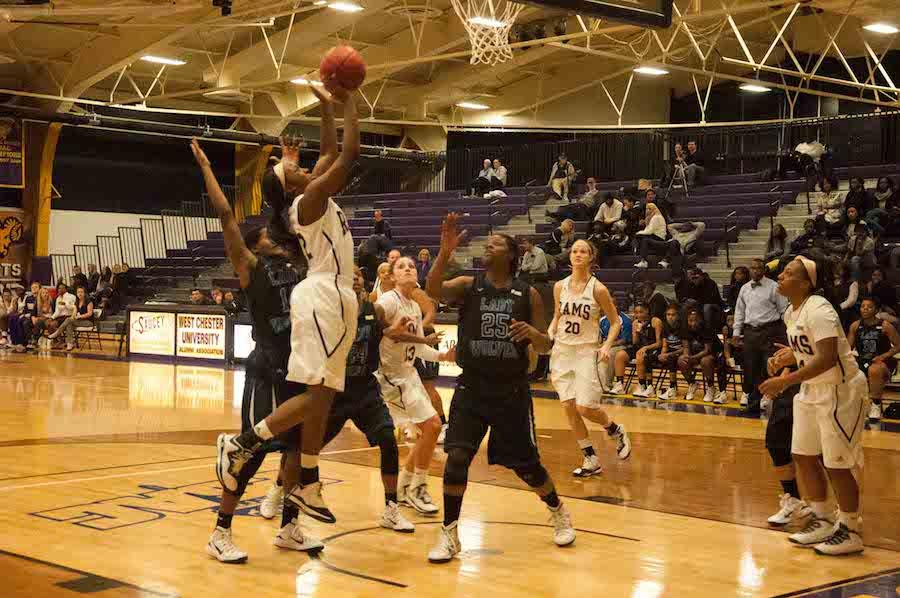 The West Chester University women’s basketball team continues to impress this season, riding a four- game win streak with a pair of victories against Cheyney University and Mansfield University.

After opening the season with a pair of wins in the Carol Eckman Memorial Tournament, the Golden Rams continued their hot start to the season, reeling off six straight wins to open the regular season, highlighted by an overtime thriller against Shippensburg.

The Raiders came out hot, opening up the game with a 16-5 lead. West Chester answered right back with huge 13-0 run to get them back into the game.  Dallas Ely scored 17 of her 28 in the second half, including five three-pointers. In the final minute, Ely drove to the basket for a score to bring Shippensburg’s lead to two. Forcing a turnover on the other end, the Golden Rams had a chance to bring the game to a tie, and they did just that. Junior Chikisha Steele-Hook made a jump-shot with 25 seconds left, tying the game for the first time since the 7:55 mark in the first half. The Rams carried that momentum and secured the win in overtime.

Chemistry is the key to success for this Golden Rams squad, as a majority of these players have been together for the past three season. Led by leading scorers Brittany Sicinski and Ely, alongside an excellent supporting cast with Steele-Hook and Anna Kuntz at the four and the five, and Jasmen Clark rounding out the usual starting lineup, the Golden Rams have one of the most complete teams in the PSAC. Porscha Speller, Mariah Powell, and Serifat Junaid provide excellent scoring and rebounding off the bench.

The hot streak to open the season for the Golden Rams finally came to a close with a 69-61 loss to Gannon, a loss starting a 3-3 rough patch for West Chester. West Chester bounced back off the 76-65 loss to Bloomsburg with a 72-62 victory against Philadelphia University on Jan. 13. The highlight of the game was the milestone set by junior Ely, who surpassed 1,000 points for her career. She is the 18th player in school history to reach the milestone, and her fellow leading scorer Sicinski will join the 1,000-point club alongside her soon. Sicinski had 19 in the victory, putting her at 946 for her career.  Steele-Hook and Kuntz each grabbed 11 rebounds down low.

The Golden Rams rolled off the win over Philly U with their second straight victory against East Stroudsburg. Steele-Hook registered her second straight double-double, while Sicinski added a double-double of her own with 21 points and 10 rebounds to put her at 967 points on her career. Four players were in double figures for the Golden Rams in the victory to put them at 13-3 on the season.

West Chester returned home this past week on Jan. 21 against Cheyney University. In a dominant victory for the Golden Rams, the bench put in extended minutes in the victory. Speller scored a team-high 14 points, nine in the second half, to go with four assists, three rebounds and two steals. Junaid matched a season-high with 13 points in the victory.

On Saturday, the Golden Rams traveled to Mansfield for a PSAC matchup riding a three-game win streak. It was a great example of the depth scoring from West Chester as five players scored double-figures for the team. Powell scored a season-high 13 points off the bench, with 10 of those coming in the second half. Steele-Hook and Speller added 12 points each and combined for seven rebounds. Kuntz added 11 points and six rebounds of her own.

The Golden Rams look to ride their four-game win streak with a pair of divisionial games on the road this week against Millersville and Kutztown University. Millersville University is 10-9 on the season and was defeated last meeting by the Golden Rams in the first game of the regular season 89-69. Kutztown is 6-11 on the season and was also defeated by West Chester in the first meeting by a score of 76-52.