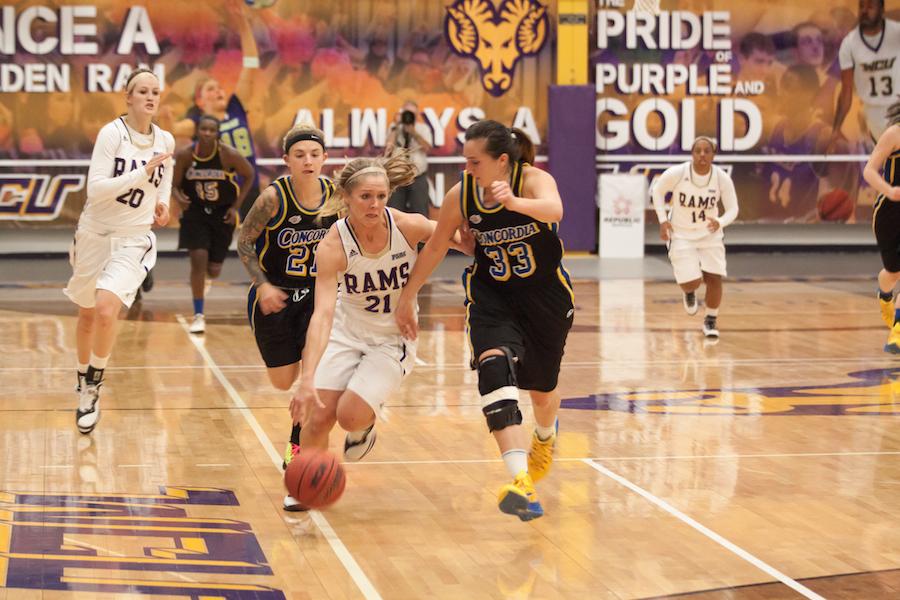 Basketball season is here and the West Chester University Women’s basketball team is ready for action. After a lopsided loss against UConn in what some call the season opener, the true season openers for the Lady Rams came this weekend right inside Hollinger Field House, when West Chester took on Concordia College and then, the University of the Sciences in Philadelphia.

Friday night was the Rams first home game and first real game of the season. Concordia, a new opponent for the Rams, could not control the scoring outbursts from West Chester, as the Rams won their home opener, 102-55.

Leading the Rams in the victory, Brittany Sicinski dominated with 21 points. Sicinski, a returning star for the Golden Rams, will be looked to as the leader of this young squad all season. This is nothing new, as Sicinski was selected a captain last year as a sophomore. With more experience under her belt, look for Sicinski to handle her leadership role extremely well and help lead this team to another successful season, on and off the court.

Not far behind Sicinski, junior Dallas Ely dropped 19 points. Ely, an All-American honorable mention last year, will be one of the main scoring threats for the Rams this season. Ely showed her skill all last year, becoming one of the top scoring threats in the PSAC, and ultimately the country. Last season, Ely lead the Rams in scoring, averaging 19.4 points a game. This season, first year head coach Kiera Wooden will look to Ely for the same productivity she gave last season.

Sicinski and Ely did not do all the scoring on Friday night; Junior Anna Kuntz grabbed seven boards along with her six points, while junior Jasmen Clark added six points of her own. Junaid, a serious scoring threat for the past few seasons, contributed 13 points along with five rebounds. Junaid and Kuntz will be responsible for the post-game section of the Rams offense, due to senior Kendall Benvoy being sidelined by injury.

Saturday afternoon, the competition rose as the Golden Rams took on U of Sciences of Philadelphia, a strong program. A hard fought game by both teams was the result, but West Chester pulled ahead very early, never actually trailing in the game, and held of a few late pushes from the opposing team.

A career day for Sicinski propelled the win for West Chester. Sicinski dropped a career-high 27 points, while nearly posting a quiet triple-double. Sicinskis’ nine rebounds and seven assists showed her all around play that will be on display all year for the Rams.

Chikisha Steele-Hooke dominated the paint for the Rams. Dropping 13 points along with 10 rebounds, the Rams first double-double of the season, Steele-Hook made her presence known. The Rams can only hope for this production all season from the 5-10 forward. Adding another presence down low would be a huge step in the right direction for Wooden’s team.

Kuntz added 10 points of her own while grabbing six rebounds. Kuntz did not see much action during her freshman year, but she ripped onto the season as a dominant big for WCU. Kuntz recorded a team-high six double doubles last year.

Next up for the Golden Rams, a home game versus Millersville University on Wednesday at 5:30 p.m. The Rams will look to grab their first win in a PSAC game on the season. In the past, Millersville has proved themselves as tough competition for the Rams, so it should be an exciting one. Come out too Hollinger Field House on Wednesday to catch the action.