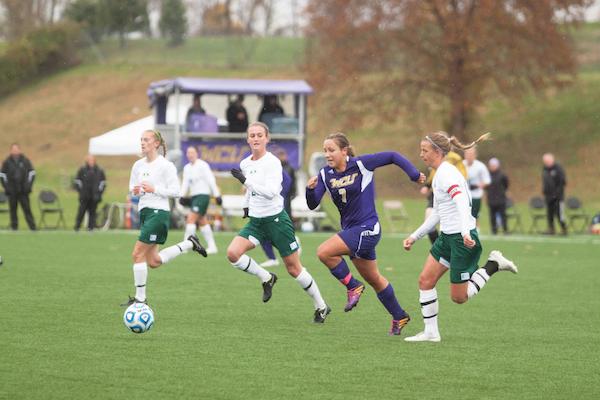 The West Chester University women’s soccer team wrapped up their regular season in great fashion on Saturday with a 2-1 victory over Slippery Rock University.

Entering the final week of the regular season the Golden Rams were tied with East Stroudsburg atop the PSAC standings with 39 points each. However, due to the fact that the lone loss of the season came against East Stroudsburg, they had the step up because they own the tiebreaker, head-to-head. For the final two games of the season the Golden Rams would need to gather more points than the Warriors would in their final two games.

Up first for the Rams was a match up against a very good California (Pa.) on Friday. It was a game where West Chester did not play their best soccer. They were being outplayed and the statistics showed it, but good teams find a way to stay in the game, and when you stay in the game you give yourself a chance. That is exactly what they did on Friday. Late into the first half, West Chester fell behind 1-0 on a goal by California’s Erin Hogan. It was her second goal of the season, and it came off a California corner kick.

For a long time the score remained 1-0, but the Rams were hanging around, not allowing anything to find the back of the net. Alex Srolis, West Chester’s goalkeeper made some extraordinary saves to keep the score 1-0. The Rams were just waiting for their chance, for any slight opening. That moment came in the 77th minute, when Kara Parvel, West Chester’s leading goal scorer, took a pass from Sara Bennis and in stride fired a shot off that found the back of the net, past the goalkeeper to even the game at one apiece. Bennis was credited with the assist, which was the first collegiate assist, and point. Bennis does not always get a chance to figure statistically due to the fact that she plays defense. So whenever she does have a chance it is good for the team that they know she is able to make that pass or take that shot if it would come down to that.

The game remained tied at one when the 90 minutes of regulation time was up. In the first overtime, West Chester was playing their best soccer of the match. They dominated the first overtime, coming close to scoring and ending the game. In the overtime period West Chester’s Haley Mangiaruga got a shot on goal, which was saved by California’s goalkeeper Meghan Jayes. With 10 minutes of play expired, the game moved to overtime number two.

In the second overtime, it was more of an even period. California had two shots, one went wide, and one was saved by Srolis. With both defenses playing strong, the horn sounded at the 110 minute mark, and the game was final with a 1-1 tie. This was the first tie on the season for West Chester. But most importantly it was only one point in the standings, and while East Stroudsburg had already beaten Slippery Rock earlier in the day, gaining three points, West Chester was now behind in the standings by two points. This meant that in the final game of the season West Chester would need a win, and an East Stroudsburg loss to be the PSAC regular season champions.

The final regular season game of the season was against another very good team in Slippery Rock University. Saturday was a very cold, and rainy day, tough conditions to perform under. However, West Chester had a lot of energy coming into the game. This was not only because they had a chance to become PSAC regular season champions, but also because it was senior day for six Lady Rams. The seniors included Carly Yost, Cara Deola, Camilla Greeby, Lexi Lentz, Sarah Wulk, and Dana Hunt. Congratulations to all the seniors on a fantastic Golden Rams career. But it was not over yet, they  all hope they can play as many more games as they possibly can.

The game was very even, West Chester with one more shot, while Slippery Rock had one more corner on the game. The entire first half consisted of strong defense and good goalkeeping. The best chance West Chester had to score in the first half was when Dana Hunt had a shot in the box, but Slippery Rock goalkeeper sniffed it out and was there for the save. The game was scoreless as it went into halftime.

The second half had a lot more excitement in it for sure, as senior Carly Yost made sure of that just ten minutes into the half. Marissa Valenti dribbled the all the way down the left side of the field and fired a shot to the center of the field where Yost was waiting, and Yost fired a shot off her right foot past the diving goalkeeper for her seventh goal of the season. Very fitting for one of the most consistent seniors to score on her senior day. Unfortunately for West Chester, this did not knock Slippery Rock out of the game, and they were still playing with a lot of energy trying to tie the game up. In the 67th minute, Slippery Rock was threatening in the box, and West Chester was unable to clear it. After numerous chances being blocked or saved, Srolis moved out of her zone just a little bit, which allowed Nicole Krueger to one touch a pass to Leslie Henny who found the back of the net. This goal tied the game at one apiece.

Coach Betty Ann Krempf Townsley of West Chester has been the soccer coach at West Chester for eight years now, and she has been coaching for 28 years total. Coach Townsley put in sophomore Maddy Baretti in the 76th minute. 48 seconds later Baretti put in the game-winning goal for the Lady Rams. It happend off a shot by Valenti, which was saved but not all the way gathered by Slippery Rock goalkeeper Annabelle Hegeman and Baretti was right there able to punch it in. West Chester would hold for the next 13 minutes and win the final regular season game of the season, 2-1.

Now they waited on East Stroudsburg and  Unfortunately East Stroudsburg won a close game against California (Pa.), 1-0. They were crowned the regular season champions, and West Chester was granted the two seed with a record of 15-1-1. This is their best finish since they went 19-2-1 in 2009, winning the PSAC tournament and heading to the NCAA Division II National Tournament.

West Chester will begin their postseason adventure on Tuesday at home at 11 a.m., against the seventh seed Gannon University. They beat Gannon the one time they played them this season, 2-0. In that game West Chester was on the road, and both goals were scored by Marissa Valenti. West Chester will need to come out strong like they did in September in order to beat a good Gannon team.  Gannon finished their regular season 9-8, but they are on a two game win streak. West Chester wishes the Lady Rams the best of luck all postseason long!