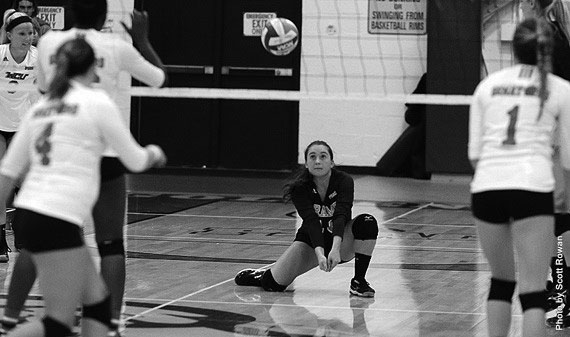 The West Chester University women’s volleyball team is entering the home stretch of its regular season, preparing for PSAC’s in the process. This week provided three good matchups to help the Rams in that preparation.

First up, the Rams traveled to Lakewood, N.J. to face off with Georgian Court University, in a non-conference matchup. The Rams won a tough battle against a good opponent, 3-2. West Chester posted a season-best 21 blocks in the contest. Senior Captain Julia O’Brien dominated at the net, posting 18 kills for the Rams. Mandy Flynn led the way in assists for WCU with 31.

Despite the game being out of conference, junior Marina Sharkey thinks the win could be a booster. Sharkey said, “Anytime you get a big win on the road, conference or not, it is certainly a momentum booster.” The win came in as a strong effort from WCU as a whole team.

Next for the Rams was PSAC rival Shippensburg. WCU has already faced Shippensburg once this season, capturing a 3-1 win at home. This week, the tables turned, as Shippensburg shut down the Golden Rams in a 0-3 loss.

West Chester struggled heavily to muster any offense, only hitting .088 percent. With the loss, the Rams fell back to a tie with Shippensburg for third in the conference. O’Brien led all West Chester players with 11 kills, but besides her double digits, no WCU player passed more than four kills in the match.

WCU did not have to wait long for a chance to avenge them selves. Saturday afternoon, the Rams faced off with Millersville University, another PSAC rival. The Lady Rams suffered a loss to the hands of the Marauders early on in the season. Tables again turned for WCU, and the Rams defeated Millersville 3-1. Leading the way for the Golden Rams was O’Brien, again, with a season-high 25 kills. Following O’Brien’s lead was Sharkey and freshman Brynne Taylor with nine kills apiece and a combined seven blocks.

Sophomore Callie Krajcir was plagued by injury for a few games earlier this season, but came back strong, providing another element of consistency for the Golden Rams. Krajcir contributed 26 assists in the win for WCU.

As the season is beginning to come to a close, Sharkey broke down what must happen for the Rams to find postseason success. “If we play simple and together, we will be fine,” stated Sharkey, “ we have the skill, it’s more about the smarts now.”

Next up, the Rams will face off with Cheyney University, followed by Lock Haven University, both away. Cheyney is usually a struggling team, but not someone to look past. The Rams won their first matchup this season against Cheyney 3-0, but dropped their matchup with Lock Haven 1-3. These late season PSAC matchups will help West Chester in their postseason push and preparation.

AJ Arcaini is a third-year student majoring in communication studies with a minor in journalism. He can be reached at AA788494@wcupa.edu.You can follow him on twitter @A_J_8.