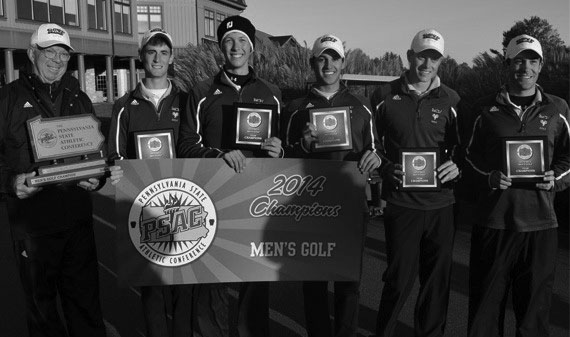 West Chester University men’s golf team was victorious. This past week, they took home the trophy for the first time since 2006, and fourth time overall since joining the PSAC.

At Hershey Links East Course this past week, the men’s golf team shaved 16 strokes off their first day total of 310, shooting a 294 the second day, outshooting Indiana (Pa.) by three strokes, winning the PSAC Championship with a total score of 604.

They even placed three golfers individually for the PSAC championships, and Eric Slawter of West Chester scored a 148 over 36 holes, finishing one stroke off the lead. Gannon’s Matt Barto ended up taking the trophy in a playoff hole over Millersville’s Robby Rowe.

The second day, the men’s golf team was clicking on all cylinders. They did not have a player that shot over a 75, led by Slawter’s one-under 71 on the day. Zach Boe of West Chester shot a 73, Ryan Fogel and Drew Patterson both carded a 75 on the second day.

For coach Harry Hammond, it was his first win with West Chester University. The Golden Rams also won the PSAC titles in 1968 and 1969, which were both before Hammond was coaching the Golden Rams.

This tournament culminated the fall season for the men’s golf team, as they obviously enjoyed a season that many of them will remember for a long time. They really caught fire at the right time of the season. In the beginning of the season, they were placing anywhere from fourth to sixth, but it was the Bud Ewell Tournament that they started playing to the best of their ability.  It was the first top two finish of the season. They fell to Mercyhurst by two strokes. West Chester thought they were leading, but due to a scoring problem, Mercyhurst took the tournament. It was still a big building block for these Golden Rams, as they headed into the PSAC tournament.

They knew the first day they did not play their best golf, so they came back on the final day, and shot their best round of the season and it allowed them to capture the coveted trophy.

For now, they will relax and enjoy this victory, but they will be back on the courses as soon as they can. Their spring season starts on March 13 when they head to North Carolina for the St. James Invitational. This is a tournament they play in to start their spring season every year.

Ryan Calpin is a third-year student majoring in communications with a minor in journalism. He can be reached at RC784188@wcupa.edu. You can follow him @calpinr