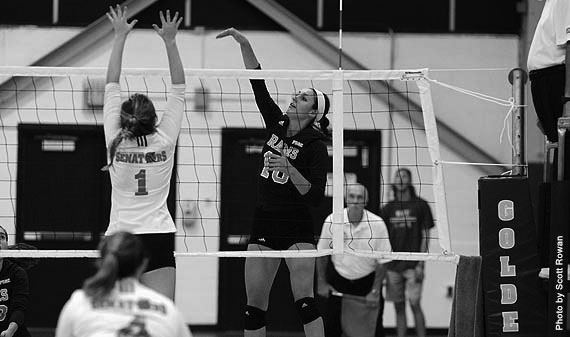 In a long two-week stretch, the Golden Rams volleyball team has seen their fair share of ups and downs. From a surprise win over a top ranked team, to dropping a tough loss to a PSAC rival, the Lady Rams have continued to push forward in hopes of improving their season.

First up for the Rams was Cheyney University. Cheyney is not the strongest opponent, but still the Rams hoped to come out with a solid win to get themselves back on track.

A win was never in doubt, as WCU swept through Cheyney with no problem, taking them in three sets. The Rams registered a stellar .412 hitting percentage, while 15 individual players got to see time on the court. The Cheyney win served as a great example of the strength of the entire team.

Next up was a huge game for the Rams, at home against Pitt-Johnstown. Pitt-Johnstown entered the game heavy favorites after being one of the top teams in the country last season. This meant nothing to the Golden Rams, as they came out firing on all cylinders. Senior captain Julia O’Brien led four Golden Rams to finish in double figures for kills. WCU took the match 3-1 in their surprise win, holding off a couple of late rallies by the strong opponent.

The win came for West Chester in an intense fourth set. After teetering back and forth between possessions, the Rams finally had enough to pull ahead and take a two-point lead, and a win 32-30. Annalee Halbert posted her career high with 53 assists.

Despite the excellent win and UPJ, the Lady Rams still had a lot of work to do. Next up, a tough PSAC opponent, Lock Haven University. The Rams have seen their troubles in the PSAC grow as the season continues, but were hopeful they could begin to put an end to their conference woes.

The Rams moved on from the tough loss, with PSAC west rivals IUP in their sights. A big PSAC win was exactly what WCU needed and IUP provided a perfect opportunity for that. A 3-0 sweep of the Crimson Hawks boosted the morale of the Rams and helped improve their PSAC record to 4-6. Marina Sharkey registered 12 kills and four digs for the Rams in the 3-0 routing.

After the great win against IUP, the Rams dropped two straight matches. First up came Cal U, who never gave the Rams a chance, dropping them in three straight sets. The Golden Rams struggled in their hitting, posting a .085 hitting percentage, one of their worst this year.

Finally, the Rams faced off with Clarion, their last game in the long and busy two-week stretch. The Rams once again could not get the job done, dropping the match 3-1. Halbert posted her fourth double double on the season, but it was not enough for the Rams to salvage a comeback against the opponent.

After a rough few weeks, the Rams will look to get back on track. Throughout the season, glimpses of greatness have been shown from the Golden Rams, but nothing consistent enough. Hopefully, the Rams will find a way to right themselves before it is too late.