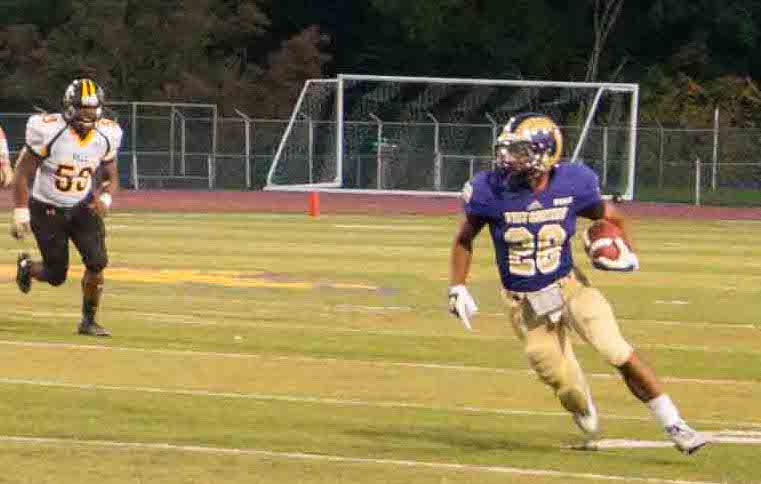 The red-hot Golden Rams stomped their way to a dominant 62-7 win against Millersville on Saturday night in front of a packed house at John A. Farrell Stadium.

The parking lots were packed as well as the stands in the family weekend showdown being the Millersville Marauders and West Chester Golden Rams. The huge turnout would not be dissapointed, as West Chester took control and scored early and often.

The Millersville Marauders stood no match against Sean McCartney and the West Chester offense Saturday night, as the Rams sailed to their season-high of 62 points. McCartney stole the show again, passing for 3 touchdowns on 307 yards all in the first half.

Along with McCartney, running backs Eddie Elliot and Brandon Monk saw the production they had been looking for all season. Despite going somewhat under the radar through the first few games, Monk and Elliot surely made their names heard to the packed crowd Saturday evening and after this game, they certainly will not fly under the radar anymore thsi season.

Monk sprung the rushing attack from the first drive for WCU, rushing for the first two Golden Rams touchdowns on runs of 13 and two yards. The Marauders linebackers could simply not keep up with the speedy Monk, allowing him to find the holes in the defense practically at will. Monk has been quiet at times this season, but this weeks match-up gave him an oppurunity to show just how good he can be for this Golden Rams team.

Elliot came back in the second half with his own fire, rushing for two touchdowns of his own, one being for 66 yards. A quick cut to the outside and the elusive Elliot was gone. Elliot finished the day with 124 yards and two touchdowns on 12 carries, his best rushing game of his career at WCU.

As a whole, the West Chester offense again passed expectations of what they could do. The Rams combined for a total of 608- yards on offense, the highest since last year’s game with Millersville. Seven different West Chester players scored, three of them scoring twice. The rushing attack also combined for over 200 yards for the second time this season.

Seven different receivers caught passes in Saturday’s contest, along with the coming out party of third-year receiver Shannon Mayer. Recording five catches, Mayer led the team in receptions on the day and also scored his first touchdown of the season on 21-yard catch and score from McCartney.

Along with Mayer, we saw more consistent performances from tight end Tim Brown and receivers Mike Doty and Erick Brundidge. Brown scored again on a big play from McCartney in the first half. Brown ran straight up the seam and in what looked to be a blown coverage, McCartney hit him with a perfect pass that led him to the end zone untouched.

Doty and Brundidge both reeled in three catches apiece and around 50 yards apiece as well.  Doty scored on a 15-yard McCartney pass to the back of the end zone in the first half.

West Chester got some great special teams help from back up running back Jarel Elder. Elder took a kickoff 90 yards to the house early in the third quarter which was a complete game sealer for WCU. Elder also tacked on a 49-yard touchdown run as the last score for the Golden Rams late in the fourth quarter. Elder continues to add a spark to the offense and special teams, which I’m sure will help in his fight to continue seeing playing time in a crowded WCU backfield.

On the defensive side of the ball, the big story was the absence of senior all-american linebacker Ronnell Williams. Williams was seen on the sidelines with a full leg brace on, but his injury is not yet known. Despite the loss, the Ram defense had no problem completely shutting down the Marauder attack.

Sophomore middle linebacker Ralph Reeves got his first start in place of the injured Williams, and posted a solid performance with four tackles. Sophomore defensive back Kevin Malone also had a solid kind of breakout performance with six solo tackles. Malone was virtually all over the place in the first half, making it nearly impossible for the Marauders to introduce any sort of passing game. In the second quarter, Millersville was looking for a way to spark their offensive. On a toss play, Malone found the hole just before the running back could, and flattened him for a loss and huge momentum booster as te crowd went nuts.

As a team, the West Chester defense was completely dominant. The Marauders only squandered a total of 258 yards on the day, which was more then doubled by the Rams’ 608.  No Millersville running backs eclipsed 65 yards on the day, along with holding Marauders quarterback Matt Misley to sub 100 yards passing.

Next up for the Rams will be Lock Haven University at home on Oct. 4. The week after, the Rams travel to Kutztown for a night game against the rival Golden Bears. Kutztown has looked dominant at times this year, along with Lock Haven who is no team to sleep on. If the Golden Rams can stay consistent to the dominant play we saw this week on both sides of the football, they will be extremely difficult to stop no matter what the opposing team is playing like.