Farwell to a Legend 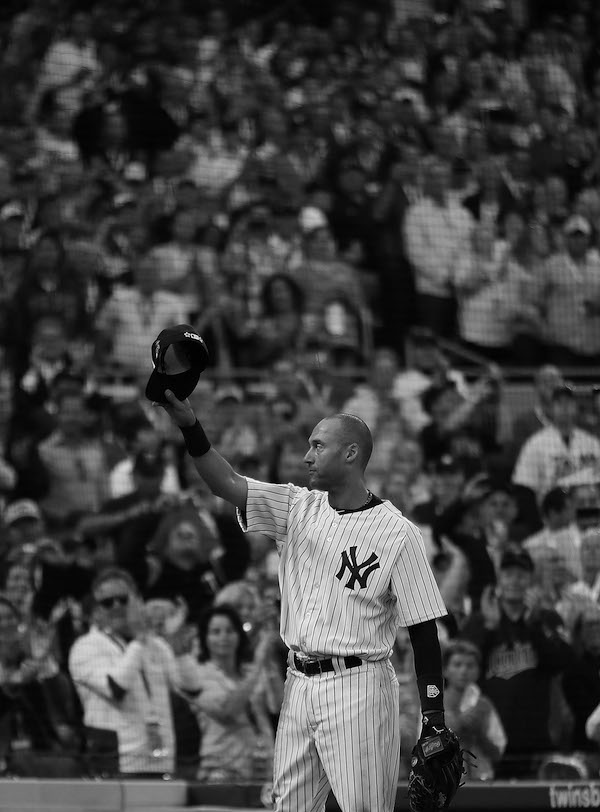 “Now batting for the New York Yankees, Number 2, Derek Jeter, Number 2.” Bob Sheppard’s iconic voice filled the New Yankee Stadium for the final time Thursday night, where captain Derek Jeter was playing in his final home game in front of the sold out crowd in the Bronx.

Sheppard, of course, was the Yankees PA announcer for the better of 56 years, who passed away in 2010, was asked by Jeter to record his at-bat introductions, so that Derek could retire with the same voice that he began his career with.

As Jeter stepped up to the plate in the bottom of the first inning against the Orioles, he took a 3-1 pitch nearly out of the park, missing a homerun by three feet. Nonetheless, he ripped a double off the wall, driving in Brett Gardner, to make the score 2-1, the Orioles lead. After Brian McCann reached on an error, Jeter scored tying the game at two.

The game remained tied at two until the bottom of the seventh, when Jeter again came up with the bases loaded, and delivered a soft grounder to the shortstop, who couldn’t make a play. Jeter was credited with an RBI, with what could have been his final at-bat ever.

In the top of the ninth with the Yankees leading 5-2, you can really start to tell Jeter is getting emotional as the chants of DER-EK JE-TER pour in from the sold out crowd. He was trying to hold back the tears, knowing that manager Joe Girardi could take him out at any moment, so that he could give one last salute to the Yankee fans.

But then the game took a twist no one saw coming. Closer David Robertson gives up a two-run homerun to Adam Jones, making the game 5-4, with one out in the ninth. After Nelson Cruz strikes out, everyone around the stadium waits for Girardi to come out of the dugout. But he just sits back down, and does not move. For a split second before the next pitch is thrown, I am shocked, and disappointed that he won’t give Jeter his moment. But then before I can become even more confused as to why Jeter was still on the field, Oriole Steve Pearce hits a towering shot into left field, tying the game at five. And then as I think about what if Girardi would have taken Jeter out? Robertson gets out of the inning, with whom else up to bat third? Of course, the captain.

First up for the Yankees was Jose Pirela, who singled past the third baseman. After Antoan Richardson pinch-ran for Pirela, Brett Gardner bunted him over to second, and the scene was set for the captain. He walked up to the plate with Sheppards voice and his Eminem walkup song in the background for the final time with a chance to win the game.

As he stepped into the box, for the fifth and final time of the night, he took no time, as he delivered his classic inside-out swing in between the first and second baseman for hit number 3,463. Richardson flew around third base, and dove home, for the winning run, and an exclamation point on Jeter’s historic career.

As Jeter realizes Richardson has scored, he jumps up, puts both hands in the air, and before he knew it, he was mobbed by all his teammates. “THE YANKEES WIN, THEEEE YANKEEES WIN!!” As Yankee radio personality, Michael Kay, would have said.

It was something that not even the best Hollywood writers could have scripted. It made ask the question, was this rigged? Of course it wasn’t, it is just it was so magical, and so perfect, and it’s not something we see happen to often.

That cast of people included Jorge Posada, Andy Pettitte, Mariano Rivera, Tino Martinez, Bernie Williams, and of course Joe Torre. After that, he goes and talks to his parents through the fence. Then it was the fans turn, as went back out to the position he has played with elegance and grace for the past 20 years, knelt down one last time and said a prayer. Which is what he would do before every game. After that he took a lap around the field, tipping his cap, and saying thank you. Nobody moved, nobody left. The Orioles, still glued to the top of the dugout, witnessed a moment that wouldn’t be forgotten for a long, long time.

In a post-game interview, after all the salutes and thanks, he said, “everyone is chanting ‘thank you Derek’, and I am thinking to myself, for what? I am just trying to do my job, so thank you guys.” That quote says everything you need to know about Derek Jeter, and what kind of player, on and off the field he has been the past 20 years.

He never expected anything like the attention and respect he has gotten over the season, just because in his mind, he was just doing his job the last 20 years.

You can forget about all the things he’s accomplished. Even if you put aside the 3,463 hits, 14 all-star games, 5 gold gloves, AL Rookie of the Year award, World Series MVP, along with leading the Yankees in almost every single statistical category and postseason leader in hits and runs. Throw that all to the side, Derek Jeter would still have been loved, and adored the way he was last week. He was a leader, a five-time champion; he played with utmost respect for the game, and gave everything he had, every game.

He is a Hall of Famer in everybody’s mind. He has a shot to become the first ever unanimous decision of going into the Hall of Fame. Athletes and celebrities across the country poured in on social media over the past weeks to show their respect to the captain. People like Michael Jordan, Jimmie Johnson, Peyton and Eli Manning, are just some of the names that were in a tribute video to the captain.

The captain said it best: “New York, you’ve been with me for the past 20 years. Your grit fueled my will. Your history strengthened my resolve. Your scrutiny exposed my flaws. Your expectation was my inspiration. From my first at bat until my final out, you helped make me who I am. For that, I am forever thankful.” No, Mr. November, captain, Number 2, we tip our cap, and we are forever thankful for what you have done for all us baseball fans, and more specifically Yankee fans.