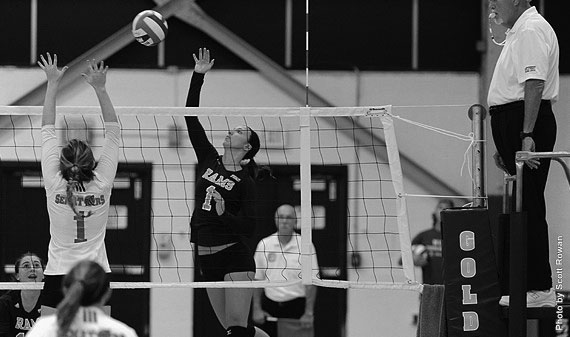 Head coach Kassie Bellaver, a nine year veteran at West Chester University coaching women’s volleyball, stated when asked about entering their upcoming tournament weekend undefeated, “The mindset was that we are working to improve our play every time we step on the court.  We are a talented team and we are striving to play to our potential on every point.” The West Chester Golden Rams Women’s Volleyball team saw their season opening undefeated streak come to a halt at the hands of Barry University at the East Stroudsburg Invitational.  Although losing for the first time this season, the Lady Rams put up a great fight in every set they played against Barry.

Despite their winning streak ending, the Lady Rams did bring home two more wins throughout the week.

Last Tuesday, the Rams opened their week with a matchup against Chestnut Hill college. Although WCU started slow, the team battled back with force, eventually taking the first three sets and shutting down Chesnut Hill completely.

Leading the way for the Lady Rams were senior Julia O’Brien and freshman Brynne Taylor with eight kills a piece.

Taylor has been a dominating force as a freshman for the Rams all season, contributing greatly to all of West Chester’s wins.In her first 5 games, Taylor has racked a strong 51 kills, second only to O’Brien.

The Lady Rams took on Southern New Hampshire  University early Friday night, a game that would result in another win for the team.

Junior Marina Sharkey completely dominated the court, recording her first double-double of the season with 12 kills and 22 digs.

Sharkey came on to the scene two year’s ago as a highly stouted freshman recruit. After two solid seasons and lessons learned from great upper-classmen leadership, it seems Sharkey is ready to grab the reigns as a leader for the young West Chester squad.

Through the solid performance of Sharkey, along with the consistent play that has been seen from Taylor, the Lady Rams surged back after dropping the first set to win three in a row and capture the match win against SNHU.

Finally, West Chester took the court against a strong Barry University team. Sharkey again came to play, recording 14 kills, six blocks and eight digs, but her performance was not enough to silence for the high powered Barry squad.

WCU took the match into four sets, losing the first two, winning one, and losing the fourth. Every game was promisingly close. The Rams never stopped putting up the pressure, but just couldn’t stop the scoring of Barry. The set scores went as follows: 25-22, 26-24, 19-25, and 29-27. Marina Sharkey played great, adding six blocks and eight digs. Freshman, Victoria Cruciani, put up a season high nine blocks, in an effort to hold down the buccaneer’s scorers down.  The Lady Rams will continue their campaign of the East Stroudsburg Invitational Sunday, facing Pace university at 12 p.m. and Bloomsburg College at four  p.m.

Tomorrow will be the Dub-C squads first outing with the Pace Buccaneers. They have no past experience of facing off against each other on the court, which will leave a very interesting dynamic. Coach Bellaver says, “We will not make changes for the matches Sunday.  We played a tremendous match against Barry even though the score sheet shows a loss.  We had some good things happen during that match and it was tough to lose such close sets.  The team will be ready to get back to our winning ways on Sunday.”

At this point in the season, I think the big news is in the freshmen that have stepped up in every aspect of the team.  Bellaver feels that, “The freshmen have adjusted well to the pace of the collegiate game and are difference-makers on this team.”  They wasted no time getting adjusted to the team and doing what they do best.

Bryce Livers is a second-year student majoring in communications. He can be reached at BL810873@wcupa.edu