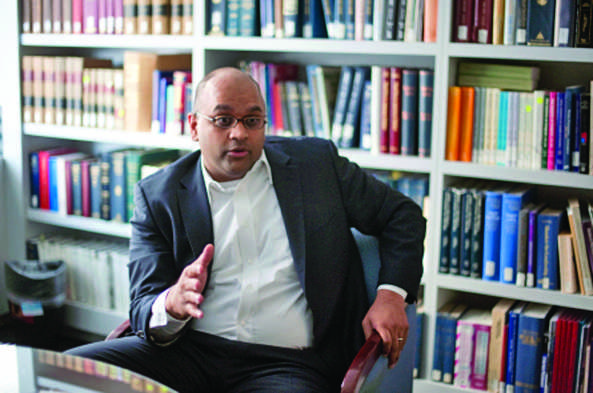 On April 17 2014, Dr. Manan Trivedi, a physician, an Iraq war veteran, and, as of now, the only democratic candidate running for the Pennsylvania’s District 6 House Representative position, visited West Chester University. With West Chester being one of the biggest schools in the sixth district, Trivedi came to the university to talk with the students about his campaign and what him winning the election will mean for them.

With Congressman Jim Gerlach’s retirement, Trivedi has a good shot at winning the house representative position. He believes that his background in both the military and as a doctor will allow him to bring a new, and much needed perspective to Washington.

As a doctor, Travedi was trained to listen to his patients and come up with effective solutions. He believes that a huge problem in Washington is that representatives are not listening to their constituents. He also knows that doctors have to get things done.

“When I am in an emergency room, I don’t ask the nurse if she voted for Obama before we work as a team, to treat someone. We have a task at hand and we accomplish it,” Trivedi said.

Trivedi’s humble beginnings have also had an impact on his views. With an engineering degree and hope for a better opportunity, Trivedi’s father immigrated to America. However, life for a new immigrant in the US was harsh, and his father found himself cleaning toilets and scrubbing floors. Through the hardships, his father carried an unfailing belief that in America you will succeed if you work hard and play by the rules. This concept was engrained in Trivedi at a young age. Today, he acknowledges that everyone deserves to find opportunity in America if, like his father, they work hard and play by the rules.

The topics Trivedi came to talk to the students of West Chester about centered on Paul Ryan’s new budget plan. Trivedi shared that he and his opponent Republican Ryan Costello share starkly different views on the Ryan Budget. Why should we care what the Ryan Budget says? As Trivedi stated, “If you want to look at someone’s values and principles you should look at their budget” and the Ryan Budget does not prioritize the education system, many social safety programs, and ultimately, the job market.

First, the budget would freeze the maximum Pell Grant award, which is a big financial aid college funding tool for low-income families. Freezing the Pell Grant fund at what is now $5,730, would in 10 years result in cuts of $125 billion. Capping the Pell Grant means that money necessary to send many students to college will be used to balance out the federal budget.

On top of the Pell Grant cuts, the Ryan Budget will also implement higher student loan interest rates. Under the budget, loans will begin accruing interest while the student is still in college, simply meaning more student debt. Trivedi provided a vivid comparison of priority when he shared that college students pay 7 percent on loans, but banks on Wall Street that take out massive loans and pay less then 0.5 percent.

Trivedi shared that he supports teachers and a sustainable education because that is the basis for a good economy. With joblessness being a top concern in the US, I was quite surprised when Trivedi shared that according to numerous studies, Ryan’s budget would account for 3 million people loosing their jobs.

The budget also proposes multiple changes to social safety programs. Trivedi shared that job training programs will be cut including those that help veterans learn how to do civilian jobs. As Trivedi stated, “If we can’t take care of our men and women who literally risk their lives for us, what kind of country are we?”

Health care becomes a voucher under this budget, which means quite plainly it is not a guarantee. People with Medicare would be allowed to use up to the amount of money provided, however after it is spent Medicare will not cover any more of the costs.  As a physician, Trivedi knows that it may only take one medical bill to use up the money provided by Medicare.

Trivedi promises that if he is elected as Pennsylvania’s District 6 House Representative, he will stand as an advocate for West Chester University and its student body. Washington needs someone who recognizes that capping Pell Grant loans and raising student loan interest rates will only perpetuate negative consequences for the education system and more specifically, the students of West Chester University.

Sarah Falta is a fourth-year student majoring in communication studies. She can be reached at SF795820@wcupa.edu.