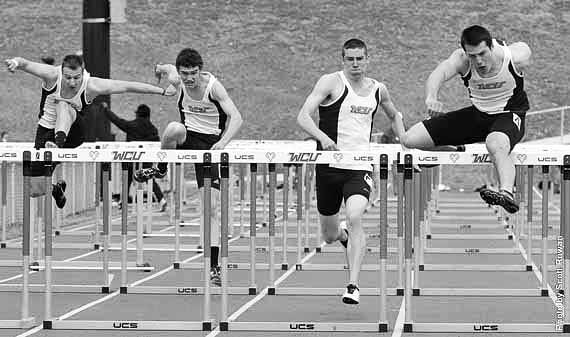 The Rams are coming off a solid performance at Millersville University on April 5. It was a sunny day as the men’s track team competed at an away track meet in Millersville, Pa. Various schools that were also competing for first place were Alvernia, Shippensburg, Bowie State, IUP, Gettysburg, and more schools from the Tri-State Area.

It was Joey DeCecco’s time to shine during this meet. He was able to win the high jump as he finished with a height of six feet and three inches, which had tied his previous career high. DeCecco also placed seventh within the triple jump. The sophomore, DeCecco, from Mechanicsburg, Pa., is one of WCU’s best jumpers, setting multiple records within the university. Last week, DeCecco came off a solid performance at the Towson Invitational in Maryland. He placed within the high jump and triple jump. His results placed him at seventh for the school’s all-time record.

Last week, the West Chester Rams had really stood out during the Towson Invitational. They were able to finish first in multiple events. Events in which they had placed first were: the 4×100 relay, 100-meter dash, 200-meter dash, 100-meter hurdles, 400-meter hurdles, 4×400 meter relay, triple jump, and the high jump. Not only that, but multiple Rams placed in the top 10 in each of those events. Overall, they finished first within nine events. Other members from the track team who had an epic performance in Towson were Mark van Teyes, Ricky Bruno, Tyler Epsey, and Nick Angelina.

However, at this meet at the Millersville Metrics, West Chester finished fifth in overall while Shippensburg came up as the winner of the meeting. The men’s track team had accumulated a total of 43.5 points to secure the fifth spot. West Chester only placed first on the men’s high jump, on the other hand, the men were able to place high on multiple events. Among the events, West Chester placed in were:  110 meter hurdles,  400 meter hurdles, hammer throw, javelin throw, 200 meter dash, 400 meter dash, discus throw, shot put, high jump and the triple jump.

West Chester will be ready and energized as they host their next meets, which take place on April 11 and April 12 at home with the Golden Rams Invitational.

Gabe Smith is a second-year student majoring in communication studies with a minor psychology minor. He  can be reached at GS783203@wcupa.edu.