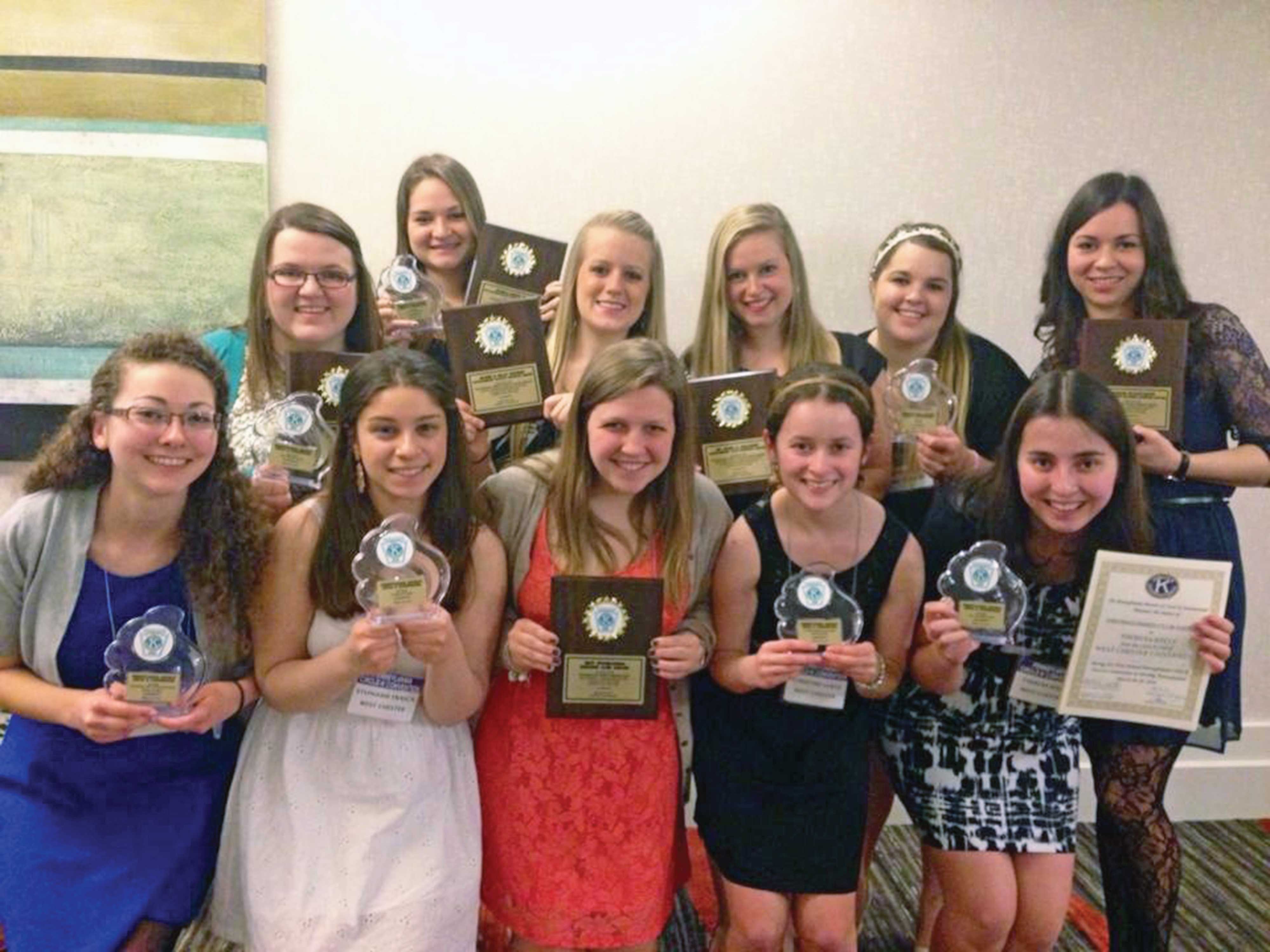 From March 28-30, Circle K International clubs from all of Pennsylvania met in Hershey, Pa for the 52nd Annual District Convention. DCON is a chance for clubs from across the state to meet, interact, learn from each other, and be recognized for a year’s worth of work.

Ten members of West Chester University’s own Circle K went to the District Convention.  On Friday, March 28, all of the PACK clubs gathered at 7 p.m. in the hotel ballroom for the opening session.  Katie Auwaerter, Pennsylvania Circle K District Governor, welcomed the clubs to the convention.

Each club was invited to perform a song or chant during the “Roll Call.”  When WCU was called, we stood and chanted “Hey, hey Circle K” and part of the Golden Rams fight song.  The winner of the Roll Call Award was Penn State University Park, who performed their own entertaining Circle K version of “When I’m Gone” (complete with the cups routine from Pitch Perfect) and a Penn State version of Taylor Swift’s hit song “22.”

After the opening session was completed, clubs were invited to meet up with each other and discuss their favorite service projects.  The theme of the convention was Harry Potter.  That night, the WCU Circle K gathered for the Trip to Hogsmeade, enjoying a snack bar at Honeydukes and making their own butterbeer at the Three Broomsticks pub.

On Saturday, March 29, clubs attended the Kiwanis Family Breakfast.  There were speakers from all levels of the Kiwanis family.  Many people do not realize that it is the educational, service leadership aspect of Kiwanis that distinguishes it from other clubs.  Kiwanis sponsors levels of their club for all ages.  During the delicious breakfast, there were speakers from K-Kids (elementary school) and Builders Club (middle school).  The new PA District Governor of Key Club also spoke. (Key Club is the high school level of Kiwanis).  There was also a video presentation on Aktion Club (a Kiwanis Club which promotes the leadership and service of adults with disabilities).  Finally, a Kiwanis Club member spoke to the crowd.   All of the speakers discussed the great community service that all levels of the Kiwanis Family have performed.

In between speakers there was also the presentation of several awards.  West Chester Kiwanis won the Best Sponsoring Kiwanis Club award.  Through their support, leadership, and guidance, WCU’s Circle K was able to have a very successful year.  For this relationship with Kiwanis, our Circle K won the David H. Baker Jr. Award.  The George McCutcheon Award was awarded to our Kiwanis adviser, Andrea Rusinko.  As our adviser, she is the main line of communication between the clubs.  Without her work, WCU’s Circle K would not be nearly as successful.

WCU’s Circle K also won the Interclub award, for having the most events with other Circle K clubs (six events).

Dr. Thomas Purce, the WCU Circle K faculty adviser, won the Glen and Sally Stevens Award.  His incredible generosity and guidance has been a huge part of Circle K’s success.  From fundraisers to events to meetings, the club would not have been possible without him.

Throughout the day on March 29, there was also the election of the new district board of PA Circle K.  Although many Circle K club members do not realize it, the district board plays a vital role in the running of all clubs throughout the state.  PA Circle K is actually the third biggest Circle K group in the country, and it performs an enormous amount of hours.  Heather Christensen of Mercyhurt University was elected as the new Pennsylvania District Governor.

District Convention would not be complete without workshops.  Sticking to the Harry Potter theme of the program, many of the workshops had titles referencing the books and movies.

The “Triwizard Tournament” workshop explained the CKIx event that is happening in Nashville this summer.  The International Convention and Large Scale Service Project (combined to form CKIx) will be attended by hundreds of Circle K club members from around the world.

The Fundraising 101 workshop was actually co-presented by West Chester University’s own Ashley Schmidt.  As the president of WCU Circle K, Schmidt was vital in planning our annual Volleyball Tournament, which took place in Hollinger Field House on Feb. 22.  Her presentation, with the help of her co-presenter Laura Brickett from Duquesne University, explained the steps necessary for planning a successful fundraiser.

Another notable workshop included the District Service Project workshop.  The Pennsylvania District Service Project (DSP) for the 2014-2015 year is Let’s SMILE.  This acronym promotes the awareness of mental health.  Proposed projects for the next year include anti-stress days and events to end the stigma attached to mental health disorders.  WCU Circle K will try to participate in this DSP with different projects.

In between sessions, WCU Circle K was able to go to Chocolate World in Hershey.  While Circle K is about service, and this particular weekend was about recognizing a year’s worth of work, it was a blast to take some time off and go to spend some together, getting to know each other better.

At the Presidents’ Banquet that night, clubs ate dinner together, before listening to the Keynote speaker.

Keynote Speaker, Amanda Badali-Pagnotta, spoke to the crowd.  As the previous President of Circle K International, she was aware of the intense amount of work that Circle K undertakes.  Currently a social studies teacher, she spoke to the crowd reminding them of a great lesson: it’s okay to be a little weird.  It’s okay to think outside of the box with service and with your day-to-day life.  She encouraged the crowd to draw a smiley face with their non-dominant hand on their other hand, and then to perform three random acts of kindness before it washed off.  The smiley face drawn on our hands may not have been perfect, but it could be turned into a real smile on someone’s face.

Most importantly, she reminded us that we should tell people that we love them, we appreciate them, and they are beautiful.

After the Keynote speech was done, the awards presentation began, to recognize clubs for a year’s worth of service.  Between the Kiwanis Breakfast and the banquet, WCU Circle K won over 20 awards.

Kim Ames, Secretary, was named a Distinguished Secretary and was awarded the Kevin E. Thomas Outstanding Secretary Award, for being the best PA Circle K secretary.  She was also recognized with a Silver Service Achievement Award.

WCU Circle K also won 1st place for the Club Achievement Award, which recognizes a club as a whole.

After the Presidents’ Banquet, the PACK gathered for the Yule Ball to dance.  Raffle tickets were drawn for the first dances with the district board.

On March 30, at the Farewell Breakfast, the PACK gathered for a final session.  Closing out the 2013-2014 Circle K year, the District Board officially retired and welcomed the 2014-2015 board.

For the second time that weekend, Governor Katie Auwaerter brought tears to the audience’s eyes.  (The first was when she accepted the Zeller Award, given to her because her family donated over $1200 in her name to the Eliminate Project).

With her Farewell Address, Katie tearfully thanked the many people who made this year possible.  She recognized, in particular, several of her fellow board members who went above and beyond.  Liberty Division Lieutenant Governor, Christine Lentz, senior at WCU, was awarded the Robert M. Cassell Award for Outstanding Committee Chair.

WCU Circle K had an amazing time at the annual district convention.  We do not perform service with the intent of getting awards.  Our motto is “live to serve, love to serve,” and we truly do.  After a year’s worth of work, the chance to recognize our hard work, however, is amazing.  From the awards, to meeting other Circle Kers, to the Keynote Address, to the workshops, PA District Convention was a huge success for WCU Circle K.

You can search #PACKDCON14 to see more photos from the event.  If anyone is interested in joining Circle K, please email TK780615@wcupa.edu for details.