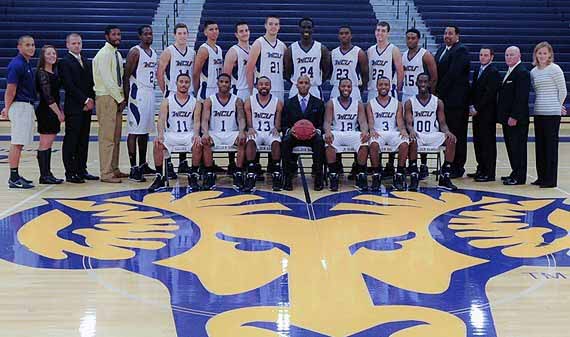 The West Chester men’s basketball season came to a close in the opening round of the NCAA Division II tournament on March 15, when they fell to the Indiana of Pennsylvania Crimson Hawks 75-68.

Both teams were coming into the game off a loss. The Crimson Hawks were 23-4, coming off an upset loss in the quarterfinals of the PSAC tournament to Mercyhurstand West Chester was 20-9 coming in losing to East Stroudsburg in the PSAC Championship game. This was the first matchup between the Golden Rams and Crimson Hawks.

Unfortunately for the Rams, the Hawks controlled the pace of the game, making it physical like they wanted to and were really a problem on offense. If you needed one stat that would tell you that IUP controlled the pace, just look at senior Troy Hockaday’s stat line. In his final game, Hockaday struggled from the field shooting 2-9, only scoring four points. For the star of the team to only score four points and the game still be very competitive shows that West Chester is a very good team.

Yes, IUP controlled the pace of the game. However, West Chester adapted to that pace and game style, and gritted it out for 40 minutes, and were right there at the end of the game. In the first half, IUP went into the locker room with a 37-31 lead, with each team shooting 39 percent from the field; the difference in the first half was free throws, and foul trouble. The Crimson Hawks got the line 18 times in the first half and cashed in on 15 of those, which put West Chester’s players in severe foul trouble. Shannon Givens, Matt Wiseley, and Ryan McKeaney all had two fouls at halftime. The sole bright spot for the Rams, and the thing that kept them in the game was R.J. Griffin, who had 14 points at halftime, while hitting three big three-pointers, including one at the buzzer that cut it to a six-point game.

Yet again, the Rams got in foul trouble which sent the Hawks to the line 28 times, but this time they missed 11 of those free throws, which allowed West Chester to creep into the game in the game’s final minutes.

In a game where West Chester only led once, with nine minutes left in the first half and IUP dominating in free throws, rebounds, field goal percentage, and assists, for West Chester to be only down one point with two and  half of a minute to go was a gift in its own. However, you have to give it to the Rams for sticking with it in a game where they did not play their best basketball, and having a chance to win it at the end.

With 24 seconds left, West Chester was down 71-68 and IUP was inbounding the ball underneath the basket. The Hawks tried to throw the ball in around half court, but Givens intercepted the pass, and unfortunately, he stepped in the front court, then took the ball backcourt due to his momentum. He then again took the ball in the front court, causing a backcourt violation, and ending West Chester’s chances of winning, as the Crimson Hawks made their free throws, and sealed the deal.

For West Chester, this ended their season, and ended the great careers of seniors Troy Hockaday, Shannon Givens, Tom Sharkey, R.J. Griffin, Ryan McKeaney, and Rasheed Wilkins. You have to be proud of the great effort they have given throughout the season. As for next season they will turn to Cory Blake, Matt Wiseley, and returning from injury will be Eddie Mitchell.

They will also be bringing in around seven to eight guys in the fall that will help them be even better next year. With the team losing main ball handlers and scorers Givens and Hockaday they will really have to rely on Blake, Wiseley, and Mitchell to pickup the slack. They are hoping that the new guys and returing players such as Doug Macarone, Ben Mingledough and Eric Frans will help lighten the load on those three players.

Head coach Damien Blair will be entering his seventh season with the team and he will be looking to improve on his already stellar resume. Blair has compiled a 111-57 record in his six years, and was the fastest West Chester coach to reach 100 wins. He has also steered the Golden Rams to back-to-back 20 win seasons, something that the great, flashy guard never did while playing at West Chester.

Coach Blair, and the rest of the coaching staff, along with the players, are all hoping, and expecting to do good things next year.

With the leadership of the guys returning, and the new guys that will be entering Blair’s system, the Golden Rams basketball team will only go up from here, and will look to get revenge of East Stroudsburg next seasson, along with the goal of winning the PSAC championship, and  the ultimate challenge, the NCAA Divsion II tournament, in which, of course, they fell this year to IUP, 75-68.

Ryan Calpin is a second-year student majoring in communications with a minor in journalisim. He can be reached at RC784188@wcupa.edu.