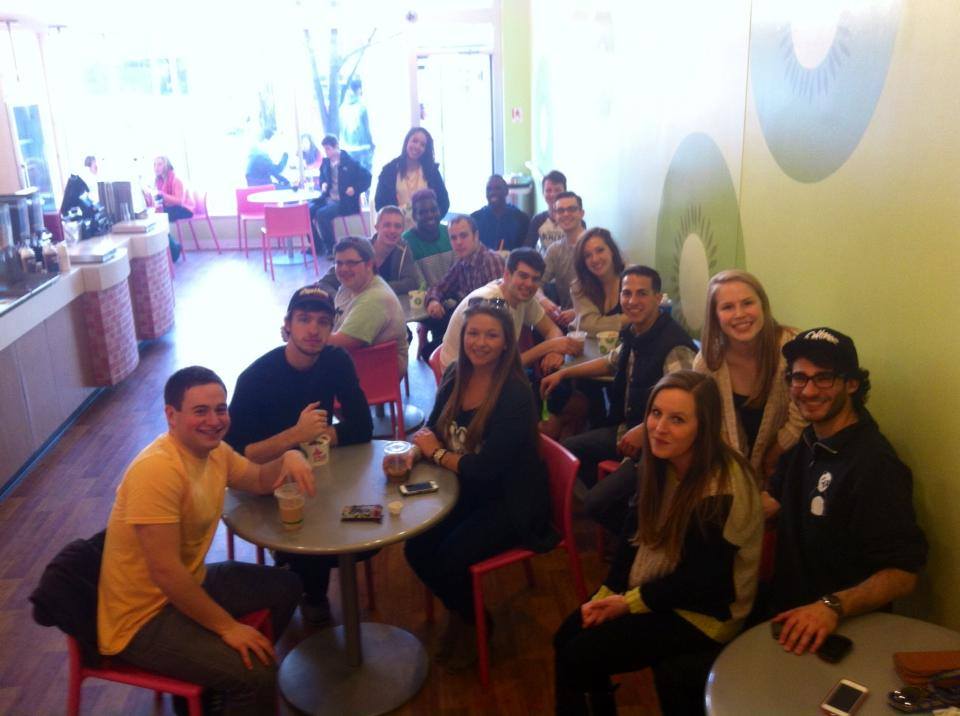 WCU’s High Street Harmonix a cappella ensemble held its first spring concert with the University of Delaware’s Deltones, from season three of the “Sing-Off,” on Mar. 22 at 7 p.m. in Ware Recital Hall.

The High Street Harmonix, an all-male ensemble, took the stage first, donned in button-up shirts ranging from black to bright colors to exhibit each gentleman’s individuality.  The group featured new music that showed as much range in genre as the colors of their shirts.

They started with the currently popular “Wake Me Up” by Avicii, with soloist Billy Natter leading the melody. Next, they took it down a notch and performed a slower Beyoncé mash-up of “Halo” and “Heaven” with soloists Malik Muhammad and Kyle Mclemore. Their third piece dated back 30 years with Tower of Power’s soulful “You’re Still a Young Man,” which were the words of wisdom the ensemble gave to soloist Tyler Propfe as he tackled the lead vocals about heartbreak. The group brought the fun and energy up with “Can’t Hold the Applause,” a mash-up of Macklemore’s “Can’t Hold Us” and Lady Gaga’s “Applause.” Soloist Jake Billings, rapping the verses, immersed himself into the image as he put on a maroon hoodie and sunglasses over his formal clothing.

The Deltones performed second with the pieces: “Nothing Ever Hurt Like You” by James Morrison, “Story of a Girl” by Nine Days, “Beautiful Disaster” by Kelly Clarkson, and “Feelin’Good” by Michael Bublé.

For the finale, High Street Harmonix, along with two ladies from the Deltones, did a Zedd mash-up of “Clarity” and “Stay the Night.” Each girl took a melody as the all-male WCU group gave supporting vocals.

The High Street Harmonix started the spring semester of 2013, with the intent of highlighting the vocal talent of WCU students from varying majors. The founder and current president Ben Saltzburg, a trombone music education major from Horsham, Pa., elaborates, “The group formed because I was sick and tired of there not being an outlet for the incredibly talented singers this campus holds almost as a secret. I myself am a trombone music education major, yet I love to sing. No one would know me as a singer if it wasn’t for High Street Harmonix and the opportunities it has opened for me, artistically. Also, I had a friend whom I knew was a dynamite singer, but did not have any medium to get involved. I wanted to start something so that people like him, who have no affiliation with the school of music, can display their passion.”

Gracenotes, an all-female a cappella ensemble on campus founded in 2006, gave the newer group its support and knowledge. Leaders in High Street Harmonix thank the Gracenotes for the opportunities the established group has given them in order to grow and develop as well as getting their name out there.

The High Street Harmonix focuses on entertaining the campus and community, and that doesn’t always include competing. Over Valentine’s Day members offered their services to deliver personal messages through song. The ensemble also participated in the Camp Dreamcatcher “Pitch Perfect” Benefit Concert, hosted by Pi Kappa Phi on March 13, to support therapeutic and educational programs for youths infected or affected by HIV/AIDS.

The C Flat Run a cappella ensemble at University of Pittsburgh has invited the High Street Harmonix to attend its annual spring concert on April 12. The WCU group plans to spend the next couple of weeks practicing for the opportunity and raising money to get there.

Tyler Propfe, music director for the group and a music education and vocal performance major from New Hartford, Conn., has confident aspirations for the young group. “Look out for us next year. We have some big plans coming up. We plan on competing, so fingers crossed, hopefully you see us on the program for the next ICCA competition. We also plan on doing more joint concerts, not only with Deltones, but with other local groups. We are also constantly improving, constantly learning. We’re a very new group, so we’ve got a very high ceiling.”

Jill Heagerty is a third-year student majoring in English. She can be reached at JH760370@wcupa.edu.