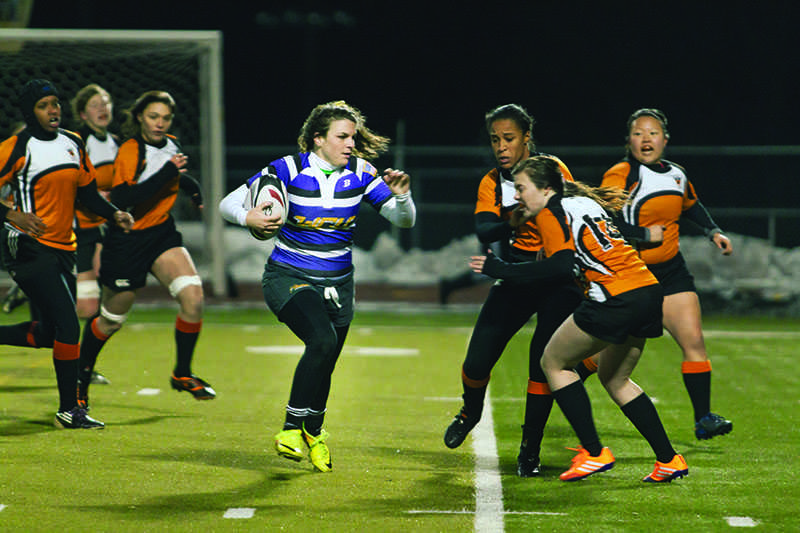 After a long break from the start of their season, the West Chester women’s rugby team is back in action, improving to 7-3.

Before returning on Mar. 1, the team had played from September to November, finishing that part of the season 5-2. The team has since played Harvard, Princeton, and Kutztown, fighting their way to improve their winning record.

The squad first competed against Harvard University, losing their spring opener to the Crimson with a final score of 17-5. The loss puts the Golden Rams at 3-4 against other NCAA varsity programs.

In the road loss, Mia Schwerizerhof experienced her first carry try. The Crimson’s team, however, was unfortunately too much to handle.

With the Rams looking to bounce back from the loss, the team hosted Princeton University at John A. Farrell Stadium in a non-conference matchup. Showing they are not to be doubted, the Golden Rams ended up beating the Tigers with a final, impressive score of 38-14.

Multiple players on the Rams stepped up in the win, including Sophia Schwab, Arielle Grant, and Nicole Benedetti. Schwab had four trys during the game, while Grant had three trys, and Benedetti scoring twice.

Following their win against the Tigers, the Golden Rams won again the next day, beating Kutztown University with a final score of 65-8.

Benedetti, Arielle Gantt, Anna Bocchino and Jeannie Connolly all had a pair of trys against the Golden Bears, helping West Chester advance to their current record.

The Golden Rams will next compete in the Mason-Dixon Tournament starting Mar. 29. The team will be playing at home in the first matchup, though the opponent has yet to be announced.

The next two games of the tournament will take place in Charlottesville, Pa., on Apr. 5 and 6, though the opponents for those games have also yet to be announced.

The team returns home for the final game of the tournament on Apr. 12, playing the Maryland Exiles. The game begins at 11 a.m.

Following the Mason-Dixon Tournament, the team will end the season with the USA Nationals.