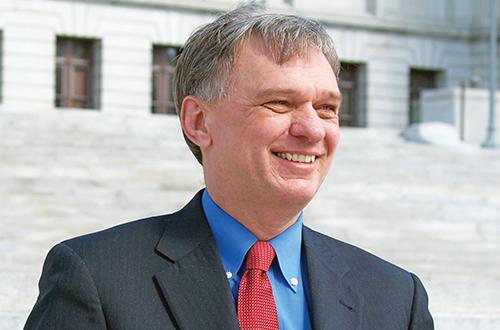 This past Thursday, John Hanger visited West Chester University.  John Hanger is one of eight Democrats vying for the gubernatorial nomination to run against incumbent Tom Corbett.  I was fortunate enough to hear him speak on a variety of topics – such as education and the environment. Many things Mr. Hanger plans on doing possess wonderful undertones for the future of Pennsylvania.  However, it is important to keep in mind: how feasible are these goals?

Mr. Hanger has an extensive plan to revitalize Pennsylvania’s education system, and to update funding for public and charter schools.   He pledges to restore the $1 billion in budget cuts imposed by the Corbett administration to public schooling.  Mr. Hanger also plans to impose a new drilling tax, as well as a tax on smokeless tobacco and cigars.  He wants to expand Medicaid as well. Lastly, he wants to legalize and tax marijuana.

Many of his plans have well-intentioned outcomes, and if successful, will surely improve Pennsylvania. Can he bring about these changes without increasing the cost of living for Pa citizens?  His campaign website lists many of the things he wishes to change, but mentions nothing in terms of tax cuts, or opposing tax increases for the average Pa citizen.  He does argue for the creation of well-paying jobs; however, that is something that as governor he can only influence and not directly control.

To his defense, he does argue in favor of cutting the poor spending habits of the current administration, and presumably, these funds will be used for Mr. Hanger’s new policies. The problem here is his lack of definition on what exactly these poor policies are.  For example, he calls to cut funding from charter schools performing poorly, but he lists no example of such a school that has performed poorly.  By contrast, he has named a few schools that have been doing well and will most certainly keep their funding.  Ad Prima and Christopher Columbus charter schools are two schools he mentions positively by name. In his words, he plans to “…redirect approximately $700 million per year from poor charter schools to public schools and to charter schools with good student performance.”  With  $700 million in question, can he give a name with some specific figures to better round out his argument?

While many aspects of what Mr. Hanger stated hold potentially great prospects for Pa, it is important to keep in mind that every single politician vying for Pa state governor displays the same message.  The most important question to ask is, are all of his stated goals truly attainaable?   Many of his goals call for increased funding for public schooling and successful charter schools; indeed, many of his purposed changes in general call for increased funding.  But where does that leave the PA state taxpayer?  I sincerely wish Mr. Hanger can bring all of his stated policies to fruition, but I remain doubtful he can do so without burdening taxpayers with additional costs, or without falling short of his goals.  His website primarily focuses on misuse by the Corbett administration, and his purposed policies to rectify what he believes as wrong.  He goes on length about how Tom Corbett is misusing taxpayer money, and how he himself would make right where he believes Mr. Corbett did wrong. But his silence on the amount taxpayers pay themselves is an area of concern.

Adam Farence is a third-year student majoring in History and French. He can be reached at AF764146@wcupa.edu.