Legacies on the line in Superbowl XLVIII 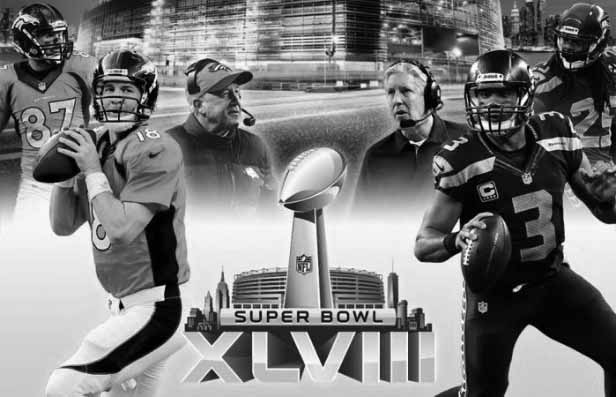 On Sunday, Feb. 2, at MetLife Stadium in East Rutherford, N.J., Super Bowl 48 will have already been played between the Seattle Seahawks and the Denver Broncos. It is a matchup that NFL fans could only have dreamed of: arguably the most explosive offense this season against arguably the most dominant defense this season. Peyton Manning against Richard Sherman for ultimate bragging rights. It is a match made in football-heaven. However, legacies and reputations are most certainly on the line in this one.

Let’s start with the Denver Broncos. Led by head coach John Fox, this is the Broncos’ second playoff appearance under their leader, after they were eliminated last season in the playoffs by the eventual Super Bowl winners, the Baltimore Ravens. Fox has turned this team around, and has brought Denver to their first Super Bowl appearance since 1998.

Fox’s only Super Bowl appearance came a little  more than over a decade ago, when he was head coach of the Carolina Panthers. Carolina ended up losing to the New England Patriots, and Fox never made it back to the Super Bowl during his time with the Panthers. Fox has made the playoffs in each of his first three years coaching the Broncos, so a Super Bowl title would work wonders for his legacy when he retires.

However, Fox could not have possibly gotten this done without his starting quarterback: a future Hall of Famer in  Manning. After signing him to a contract last season, Manning has returned the favor by breaking the NFL record for passing yardage in a season (5,477 yards), as well as passing touchdowns in a season (55). All in all, that is highly impressive for a guy who many thought might not ever play again following a neck surgery procedure in 2011.

Though he may have broken multiple records this past season, and is well on his way to his record-breaking fifth MVP award, Manning’s legacy will take a significant hit if he cannot get past the Seahawks to obtain the coveted Lombardi Trophy. Manning may have one Super Bowl to his name after leading the Indianapolis Colts to the title back in 2007, but shockingly enough, Manning also holds the record for most losses in the playoffs, tied with Brett Favre for 11 overall.

The perception that Manning cannot win “the big one” will haunt his legacy forever if he cannot overcome the Seattle Seahawks. Manning at least has one Super Bowl win to his name, but the fact that he has made so many appearances in the postseason without bringing home multiple Super Bowl titles damages his argument as the greatest quarterback to ever play the game. In fact, Eli Manning, Peyton’s younger brother, has more Super Bowl victories than Peyton! No amount of MVPs or Pro Bowl selections can overcome that glaring flaw.

On the opposite side of the field, the Seattle Seahawks are led by head coach Pete Carroll. Carroll, in his fourth year with the ‘Hawks, is making his third playoff appearance in his fourth year with the team. This is Carroll’s third team he has coached in the NFL; previously, Carroll had stints coaching the New York Jets and the New England Patriots. Carroll’s legacy does not take as much of a hit as Fox’s if he loses this Super Bowl, but it most certainly does not help, either. After leading USC to multiple college bowl titles, Seattle fans will certainly be expecting Carroll to bring Seattle their first ever Super Bowl victory.

Leading the Seahawks on offense is quarterback Russell Wilson, playing in his first ever Super Bowl. What is so impressive about Wilson is that this is only his second year in the league, reaching the Super Bowl before any of the other quarterbacks who were picked ahead of him two years ago. That list of quarterbacks includes Andrew Luck, Robert Griffin, and Ryan Tannehill. Wilson also only stands 5-foot-11, which is much smaller than the average quarterback height. Needless to say, Wilson has surpassed expectations immensely, and win or lose in this title game, he has an extremely bright future in this league.

Maybe the player who has gotten the most attention leading up to the Super Bowl is Seattle Seahawk cornerback Richard Sherman. Known for his brash, confident behavior, Sherman is not afraid to speak his mind to anyone and everyone, evidenced by his post-game interview after the NFC Championship when he immediately announced on live television that he was the best cornerback in the game. Like him or dislike him, not many can argue with Sherman’s claim that he is the best cornerback in the game, or at least one of them. His play has spoken for itself.

With that said, Sherman better hope that his team can overcome Manning’s ferocious offense. All of Sherman’s outspokenness has given Seattle much more media attention than they are used to, and not all for the better. Many disagree with Sherman’s behavior and attitude, and if Sherman cannot back up his talk, he will surely be scrutinized for years to come. Like Manning, Sherman’s regular season play will not mean much if he cannot back it up with a Super Bowl victory.

Now by the time this article is published, everyone will know who won the Lombardi trophy, and who is going home disappointed. However, it is important to remember just what this victory or defeat could mean to certain players. A win could cement Manning’s argument as the greatest quarterback to ever play the game. A loss in the Super Bowl could make Richard Sherman, once seen as dominant, come off as a man who was all bark and no bite. It’s the best offense versus the best defense. May the best man win.