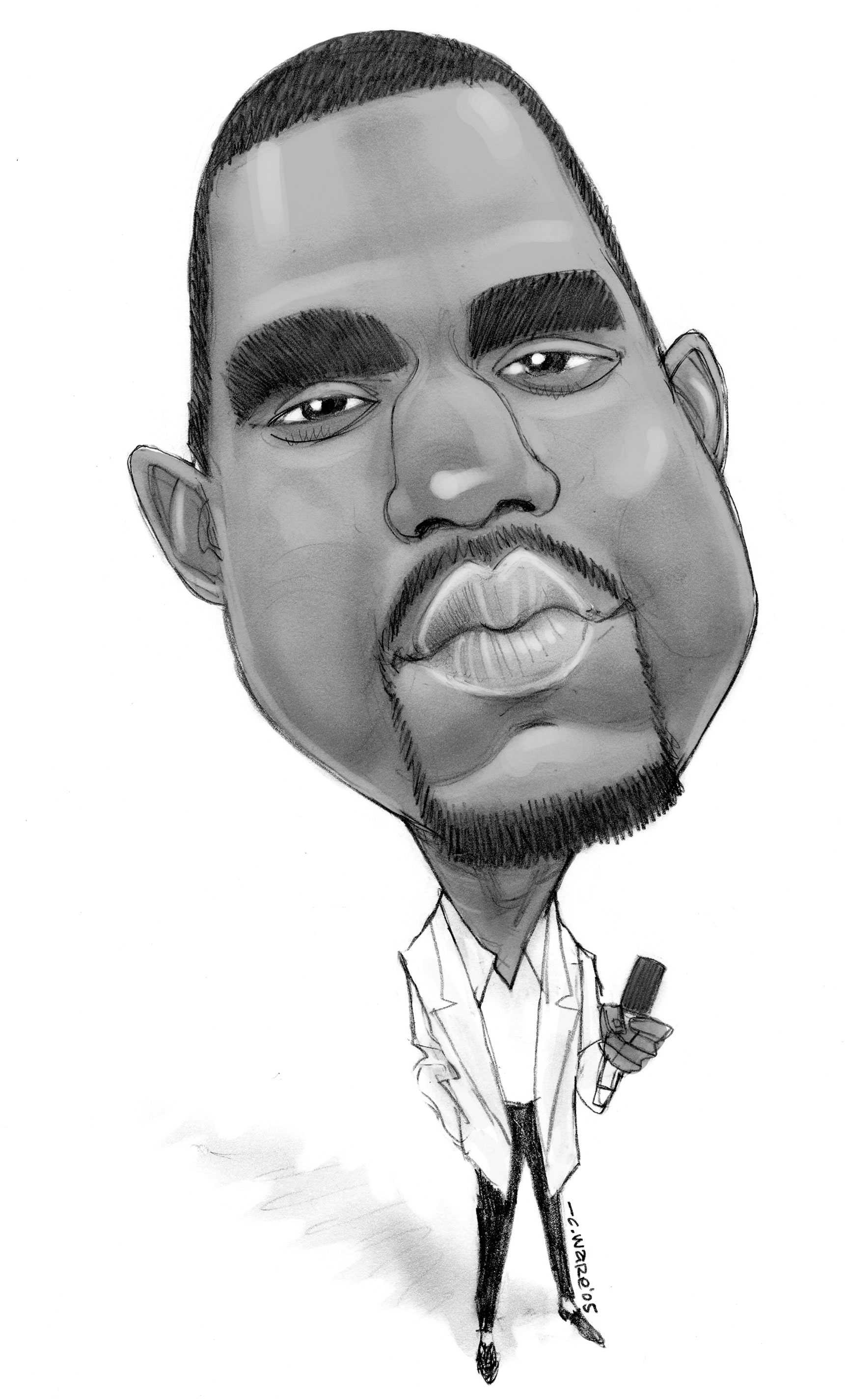 It does not faze me at all that Kanye West consistently manages to become the object of featured headlines in tabloid news. However, what does faze me is the overall lack of importance and the educational value found within stories regarding West’s controversy. This certainly begs the question – What is entertainment news? If Kanye West were to release a new album then I could certainly concur with the paparazzi and entertainment news outlets such as People Magazine or Rolling Stone, but when a publication prints a story about West’s latest run-in with media, you expect a groundbreaking story such as murder trial or a physical altercation. Instead we receive a rehash of West’s dismal past encounters with the media bearing little to no severity or relevance. Since the beginning of 2013, there have been multiple stories pertaining to statements West has made in interviews and media appearances. Some of the statements he released were typical of West while others were outrageous and simply moronic.

In an interview with Chicago Power 105.1 last year, West compared himself to the animated genius, Walt Disney and made the argument that his fiancé, Kim Kardashian was the living embodiment of Marilyn Monroe. He later compared himself to former Apple Inc. executive and CEO, Steve Jobs, renowned business magnate, Howard Hughes, and lastly current NBA commissioner, David Stern in which he concluded, “If anything,” he insisted, “that’s a compliment to them! I’m like Michelangelo. Because I’m the new version of that.” It’s quite common to hear celebrities unfavorably compare themselves to cultural or historic relic such as Steve Jobs and Howard Hughes, but the egotistical undertone and the absence of subtly only demonstrates West’s inability to contain his feelings and for the most part be himself. Then again, West does not know who he is. The media and the public can all easily identify West as a self-proclaimed narcissist and a staggeringly overvalued musician and as do myself, but despite his tendency to spark controversy many forget who West truly was including; West himself.

Recently a religious organization inspired by the MC emerged in upstate New York under the tutelage of 23-year-old aspiring musician and producer, Brian Liebman. Liebman founded the movement which is dubbed “Yeezianty” last December as he fortified a website and a religious text in revelation of West. The producer defended the creation of the religious movement declaring his faith as “a stepping stone to Jesus.” In a bizarre interview with The Daily Mail, Liebman revealed his true identity after he anonymously established the credo of Yeezianty as well as described his motivation. The young man, who currently lives with his parents in a suburban residence outside of the metropolitan sector of New York, claimed that West was his biggest role model and kotowed him as a hero to the people.

“In a lot of ways, after I created it, I reflected on it and thought that this was just a rehashing of Christianity, but just throwing Yeezus instead of Jesus,” the founder of Yeezianity said in an interview with noisey.vice.com. “And you know what? That’s why I felt Kanye did it. He just put the name there. Jesus has all this baggage and all these connotations, and Yeezus is this new thing—and that’s why I say in the ‘Our Savior’ part of the site, ‘We don’t speak of his public persona.’ Because Yeezus is when Kanye elevates to that God-level, which I feel like we all have the potential to do. That’s why if it takes off, in the future, people would forget Kanye and his antics, and instead focus on what the message is.”

According to Liebman’s followers, Yeezianity hinges on the view of the Hip Hop artist as “a divine being who has been sent by God to usher in a New Age of humanity.” Much like the Nations of Islam’s Quran, Yeezianity consists of five pillars: 1. All things created must be for the good of all; 2. No human being’s right to express themselves must ever be repressed; 3. Money is unnecessary except as a means of exchange; 4. Man possesses the power to create everything he wants and needs; 5. All human suffering exists to stimulate the creative powers of Man.

The title “Yeezianity” famously stems from West’s sixth studio album entitled “Yeezus” which was released under heavy scrutiny and little promotion last June. The album met universal acclaim from critics, but saw a divided opinion amongst the public. West was galvanized by minimalism from design, including architecture, and was particularly interested in the works of Le Corbusier, visiting The Louvre several times while in Paris. Upon its release, Yeezus was widely-renowned for dark and sonically experimental production, combining elements of Chicago drill, dancehall, acid house, and industrial music.

In the closing seconds of his interview with noisy.vice.com, Liebman ultimately described West as “the most honest person in our culture.” When asked about the origins of his statement he responded definitively, “He has the highest moral standards and highest integrity. He is the most creative person. And as it’s typical with creative people, he gets a lot of flack from the lower minded masses. It’s not even that they don’t like him, it’s that they don’t know what he’s doing because the press gives it this negative spin all the time.” Kanye West has been characterized as many things, but he is nowhere along the lines of a religious idol or a folk hero. In fact, just examining his past alone, West is the furthest thing from what a good Christian is considered. If America has learned anything about Kanye West in a seven-year span, maintaining good mannerisms and a moral reputation are essential to one well-being and West sadly has kindled far-reaching apprehension.

Liebman fails to recognize that West is far from a man of moral standards and unfathomable integrity. It’s abundantly clear that West isn’t a shining example of hope and change like. He isn’t a torchbearer. He isn’t a philanthropist. He isn’t a god. West is simply a hip-hop musician poisoned by fame, narcotics, and egotism and with that being said, the Chicago-bred MC is undeserving and unwarranted of praise.

In summary of his lengthily career scattered by wrongdoings and miscues, West made contentious remarks about former United States President, George W. Bush calling him a racist on NBC’s Hurricane Katrina Benefit Concert in 2005, he publicly humiliated country musician, Taylor Swift at the MTV Video Music Awards in 2009 after he interrupted her acceptance speech due to his favoring of Beyonce Knowles, he completely mishandled his relationships after having an illegitimate child with glamour model, Kim Kardashian, he provoked anger in the military when he compared his career to that of a police officer or war veteran, and lastly on November 26, 2013, he sparked a media circus after he made several anti-Semitic assertions about the perceived wealth and power of the Jewish community.

In essence, there is nothing remotely moral or honorable about Kanye West. His crowning achievements are long behind him and his gradual prominence in the hip-hop community will forever be lapsed.

It is difficult to believe that this is indeed the same man who brought us the aesthetic masterstrokes of The College Dropout and Late Registration in the mid-2000s and introduced lyrical talents like Talib Kweli, Pharoahe Monch, Common, and Mos Def to a larger market. In retrospect, it is slightly disappointing considering musical scholars and historians will most likely recall the pitfalls of West’s career from his political outburst on NBC regarding our former United States President to his highly publicized liaison with Kim Kardashian as opposed to his virtuous past when he compiled critically-adored “The College Dropout” and “Late Registration.” Kanye West circa 2004 was surprisingly a gifted performer and a studious craftsman.

The positivity of West is certainly out-shunned by the colossal implosion of his image and prestige. If West were to repair his tarnished image, it would take a Robert Downy Jr.-esque transformation to redeem his peers and the public, but Mr. West has all but lost his ways and for diehard fans it would take more than a miracle for him to return to his hip-hop roots.