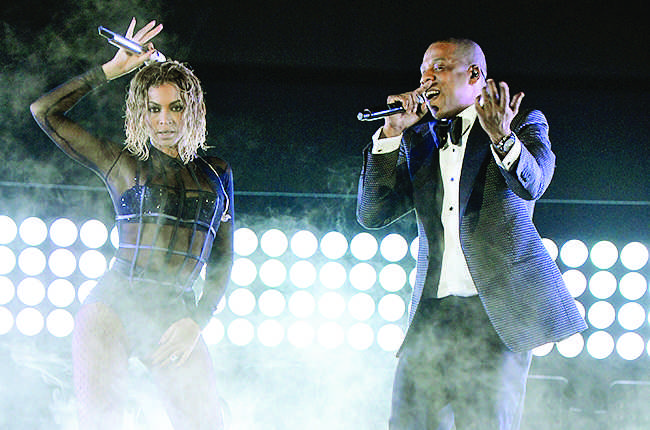 For those of you who chose to tune into the “Bachelor” wedding last Sunday, the Grammy’s celebrated their 56th annual award show, starting it off with a bang. The queen of hip-hop, Beyonce, and her right-hand king, Jay-Z took the stage in a powerful opening performance singing “Drunk in Love,” Jay-Z rocking his suit and tie as usual while Beyonce, looking undeniably sexy, wore a black cut out leo with full body mesh and her hair looking like she was just doused in water making for a perfectly sexual performance.

After seeing the power couple take the stage it was hard to believe that anyone was going to be able to top it, but sure enough Macklemore and Ryan Lewis took the stage for the closing performance, and no doubt this will go down as one of the most emotional, symbolic performances the Grammy’s has ever seen. As Macklemore and Mary Lambert sang their song “Same Love,” 33 couples were married, gay and straight, presided over by Queen Latifah. The song that discusses discrimination and negativity towards homosexuals made everyone in the audience and even people at home shed a few tears. The performance was beautiful and symbolic and really proved that the family of music is so close-knit, constantly supporting and cheering each other on.

Even though the equality performance blew the audience away, the true spotlights were on Lorde, Daft Punk, and Macklemore, who took over the award part of the telecast. Lorde became the youngest artist to win in a general category when “Royals” won the award for Song of the Year and Best Pop Solo Performance. Daft Punk’s album “Random Access Memories” won Album of the Year and Record of the Year, making it the first win in a general category for a dance-oriented album since 1978. Daft Punk also won pop duo or group performance and a few other honors for their single “Get Lucky.” They then performed it in a medley with Chic’s “Freak Out” and Stevie Wonder’s “Another Star.” The real stars of the night were Macklemore and Ryan Lewis who swept nearly all of the rap categories they were nominated for, leaving artists like Kendrick Lamar and Jay-Z in the dust.

Although Lamar did not take home as many awards as he hoped, he still had one of the best collaborative performances with Imagine Dragons as they played “M.A.D.D. City” and “Radioactive” towards the end of the telecast. Some other preformances included Katy Perry, Ringo Starr, Kacey Musgraves, Paul McCartney, Keith Urban, etc. Overall the 56th Annual Grammy Awards proved to be a huge success, until next year music fans.

Erin King is a first-year student majoring in communication studies. She can be reached at EK800454@wcupa.edu.