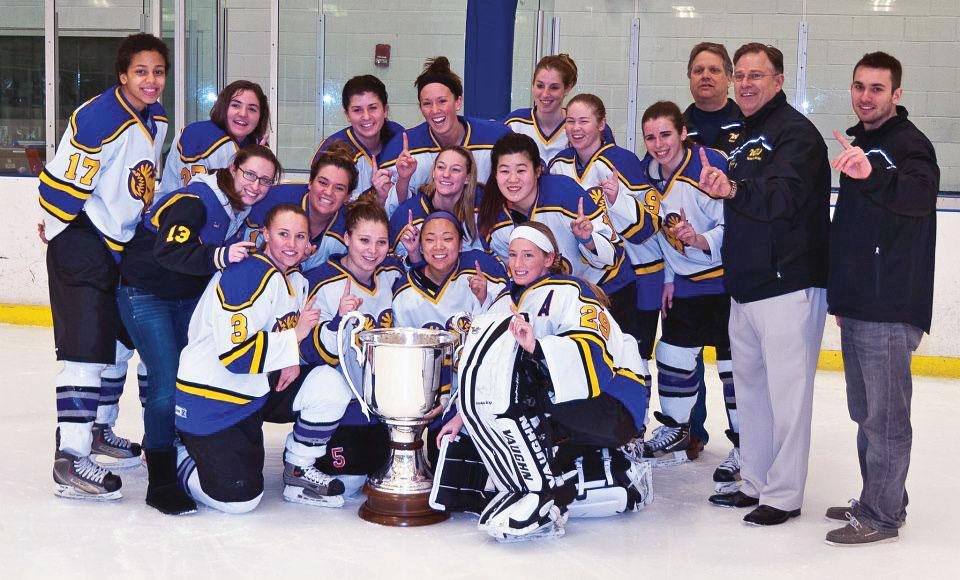 Last week featured a bit of dÃ©jÃ  vu for West Chester’s women’s ice hockey team, as they defeated University of Maryland for the second straight year to capture the DVCHC title.

The Golden Rams powered through the playoffs, beating Slippery Rock and California University of Pennsylvania 10-1 and 5-1, respectively, before a convincing 6-1 win in the championship game against Maryland.

Despite the surplus of goals, it was the exceptional defense that stood out in the Rams’ three payoff wins. They allowed just 25 shots in the first two games and only 11 in the championship game, and Aly Golia stopped 58 of those 61 total shots. When a team only gives up one goal per game, they have a pretty good chance of winning.

“When you get to playoffs it’s not always about how many goals you score it’s more about how many goals you give up,” head coach Dave Japchen said.  “We set up in all three zones defensively and what I mean by that is we don’t get over extended or ‘separated.’  We support the puck wherever it is.  These girls have been drilled on positional responsibility and I hold each one accountable regarding this.”

The backbone of the West Chester defense corps is unquestionably Amanda Vito, who can shut down top players on the back end, and provide an offensive flare when needed. Vito took home the playoffs Most Valuable Player award.

“Amanda Vito is without question the best defenseman in the league, if not the entire ACHA,” Japchen said.

“[Vito] is the unsung hero of the season,” goaltender Aly Golia added. “She played with a hurt shoulder all playoffs and was still named Most Valuable Player. She truly fits the role of being our captain.”

West Chester’s shut down defense can also be attributed to a strong physical presence on the ice. Checking may technically not be allowed, but do not let that fool you. There is still a tremendous amount of physicality and intimidation, and it is one of the biggest parts of West Chester’s game.

“I want my team to play with an attitude and an edge,” Japchen said. “Look at our penalty minutes. I think we lead the league and ACHA in that department.  If you’re going to come and play us you better tighten your seatbelt.  We’re going to knock you around and that’s the way I want it.  We do not shy away from the physical play at all.  We embrace it.”

Offensively, West Chester got contributions from all over the roster during the three games.

Dobson led all scoring during the playoffs with 10 points (four goals, six assists), including a hat trick in the opening round against Slippery Rock. But she was not alone. Dobson was one of three Rams to have a hat trick in the tournament, the others being Lindsay Howard, also in the first game, and Daria Carzo, who came through in the clutch in the finals with three goals and an assist. They were her first three goals of the season.

Rice was one of the quiet, yet productive players this season for West Chester, and her hard work translated to four points and contributed three team victories in the playoffs.

“Emily [Rice] may not get all the points, but she is so strong on her skates and gets to where she needs to be so quickly it helps our second and third line have time to set up,” Japchen said.

Although the championship game was not until Monday, the Rams real victory came Sunday against California University (Pa.). The Vulcans gave West Chester a run for their money during the regular season, finishing just behind West Chester (12-1) with a 10-1 record. They were also responsible for West Chester’s only loss this season. Beating them convincingly in the semifinals was a huge boost for the Rams, and in some ways was more impressive than their win the day after against Maryland.

“Honestly, our championship game was [the game] against California,” Japchen said.  “They’re one of the best teams in our league and have been No.1 in the ACHA most of the season. Our win over them in the semifinals was our championship game and it was a convincing win, as well. We dominated them from the first puck drop.”

The three wins in the DVCHC playoffs are not the end of the road, however. West Chester will get a bid to nationals, which is something they surprisingly missed out on last season despite being DVCHC champions then, as well.

“It is exciting to win the league back-to-back for sure, but nationals is our ultimate goal,” Dobson said.

“This weekend at playoffs, we knew we had to prove why we were No. 1 in the nation and we definitely did that,” Golia added. “But, as coach [Japchen] would say, winning the DVCHC is just ‘another rung in the ladder’ towards that ultimate goal of winning a national championship.”

West Chester will leave for Ashburn, Va., next week to compete at nationals. Games will be played between March 7-10, and the schedule for matchups has not yet been released.