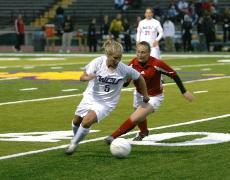 This past Saturday, October 7, fans poured into Farrell Stadium to see the undefeated West Chester women’s soccer team, the No. 2 seeded team in the nation, take on the Warriors of East Stroudsburg. The Golden Rams entered this game 12-0 overall, and 7-0 in the PSAC East. After 90 minutes of back-and-forth action, the Rams came away with a 2-0 victory, extending their undefeated streak to 13 games, and clinching a playoff berth. The Rams were forced to play without their defensive anchor, co-captain Casey McKinney, due to an injury. From the kick-off, the West Chester women went straight to the Warriors goal, and never backed off. The East Stroudsburg defense and goalkeeper were tested time and again, but managed to hold the Rams to a scoreless first half.

Coming back from the break, West Chester went back to work, with Brittany Yetter finding the back of the Warriors net at 49:17. Yetter, unassisted, broke through the defense and chipped the ball up over the keeper for the game winner. Lauren Ginnona later added to the lead at 74:27, slotting home a rebound off of a shot by Michele Kolenet. Kolenet was credited with the assist on the play. Hilary Smart earned the shutout victory, having to make only one save.

Head Coach Gerry Lucey, commented on the game, stating that the girls gave a solid team performance. “There was a little frustration in the first half, but the girls showed determination, perseverance and kept a positive attitude. We also came up with some big goals when we needed them.”

When asked about having to watch the game, rather than play in it, Casey McKinney replied, “I hated it. It does give you a different angle to see the game from, though, and I was able to see things that we need to work on.” Co-captain Julie Karcher simply smiled and added, “We Won!”

With the victory, the West Chester women remain No. 2 in the nation in Division II. Upon reaching No. 2, this outstanding team of women became the highest ranked sports team in West Chester University history. These women are gaining the recognition of the nation, and continue to remain humble and grounded.

“Our number two ranking is not the focus, it’s just a number,” stated Coach Gerry Lucey. “It’s nice to have the recognition of the nation, but still, it’s just a number.” Referring to how the ranking affects the players, he added, “We’re trying to keep our feet on the ground and stay focused on our goals. I’m impressed by how the girls don’t let it get to their heads and show no arrogance. They simply continue to fight, to play, and keep the number tucked away. Nothing is won yet, so we have to play game to game. There is no pressure, so the girls can just play their best.”

For the returning players, however, a No. 2 ranking does not mean they can stop here. Co-captain Julie Karcher says, “a repeat performance plays a big role.” The returning girls have the goal of following up last year’s NCAA championship run, which was brought to a halt just shy of the Final Four.

With the number tucked away, the focus for the rest of the season aims at keeping the girls healthy and staying on course. “We have had so many games in a short amount of time,” states Coach Lucey. “We need to remain physically and mentally prepared for games and keep our feet on the ground. This is a great group of girls, with great leadership. This leadership comes from the captains, the seniors, and the upperclassmen. The seniors will be sorely missed.”