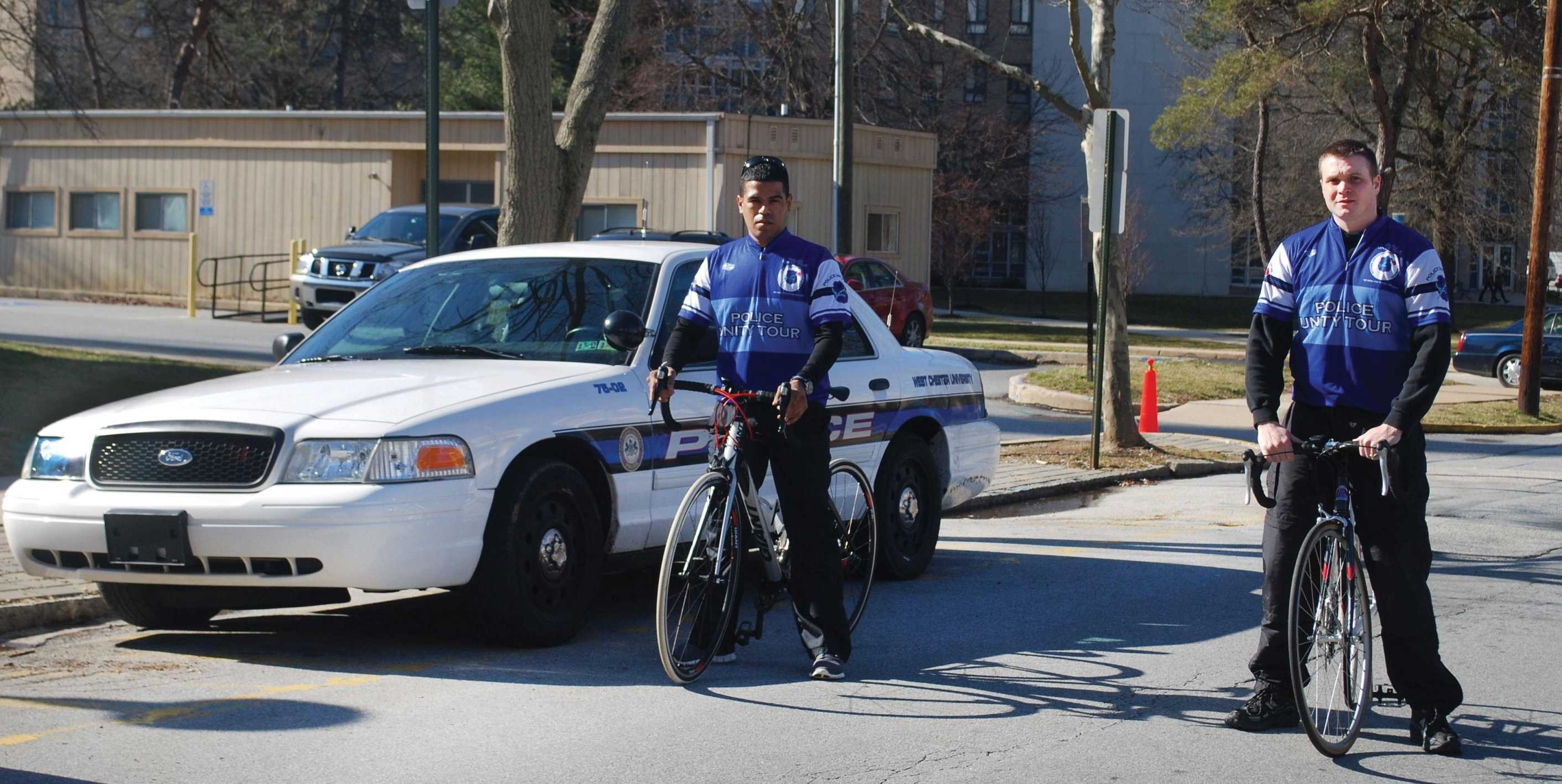 The only other Pa. police officers participating are from the Berks County Sheriff’s Department. The riders from these two counties are honoring Deputy Kyle Pagerly, among their fallen brothers and sisters.

The bicycling begins on May 9, leaving from South New Jersey in Florham Park; the participants will pick up more riders along the path. The Police Unity Tour bicycle route takes riders through N.J, Del., Md. and into Wash. over the course of four days. About 250 riders will leave from N.J. with the officers, and they will finish with well over a thousand riders, says Davila, on May 12. The officers will escort the spouses and other family members into the candle light vigil on May 13.

The Police Unity Tour helps raise awareness of the lives that are taken every year in law enforcement and to assist survivors of fallen officers. Names of the fallen officers from the previous year are announced in recognition for the sacrifice they made to keep others safe, according to the website www.policeunitytour.com. At this point, family members will be recognized. Davila said all police officers are survivors of fallen police officers.   “It’s tough doing what we do. There’s danger with each job,” Klein said.   “You don’t know what you’re walking into,” Davila added.    “Any day could be your last,” Klein said.

Davila worked at Berks County Sheriff’s Department for almost five years. During this time, he faced another loss of a slain officer. Pagerly lost his life at 28 when he served a high-risk warrant on June 29, 2011.

“He was the first person I knew and had a friendship with . . .” Davila paused. “It’s a little bit different, it hits home. It always hits home.”

This past summer, Pagerly and his canine, Jynx, chased a suspect who bunkered down into the woods, Davila explained. When the dog alerted officers of the suspects’ location, Pagerly and the suspect “got into a gun fight.” The suspect died on the scene. Pagerly lost his life at the hospital. “If it wasn’t for my buddy and his dog, the other guys walking up the hill wouldn’t have seen the suspect,” Davila said. “He gave up his life to save everybody else.”

He wears a bracelet with his friend’s name and End of Watch (E.O.W.) date. Two paw prints are among the information, representing his K-9.

“[There are] only so many people who are willing to sacrifice their life for the greater good,” he said. Pagerly’s wife gave birth to her first child, Savannah, this past January.

Davila wears a mourning band over his badge.

The band consists of a blue line between two black lines. The thin blue line represents that the police are the only thing standing between peace and law-abiding citizens and total anarchy. It is a very thin blue line, Davila explained.

“You’re proud to consider yourself a part of the thin blue line,” Davila said.    He plans to wear the band until the first year anniversary of his friend’s death.  “You’re reminded of it every day,” he said. Davila recalled how hard it was to walk past Pagerly’s desk.

“You don’t want to have to keep looking at it,” he said as he saw Pagerly’s K-9 vehicle, which remained parked outside the station.

Davila discussed the Police Unity Tour and a second bicycle tour with Pagerly’s widow, Alecia. The second tour is shorter with the bicycle route remaining in Pa. Alecia told him: you know what Kyle would do.

“If you would’ve known Kyle,” Davila began with a smile, “He was very competitive.”

Pagerly was passionate about his job and bicycling. What a way to honor him, Davila thought, as he decided to join the ride in honoring his friend Pagerly, he held a service in “saving our lives.”

When Davila made up his mind to enter the Police Unity Tour, he first signed up alone.    “I could have done this as an individual,” he explained. “I wanted someone else to experience this.”

Riding in pairs, partners Davila and Klein will ride at a steady pace together.   “It’s an emotional time at Police Week,” Klein explained, “It’s something I wanted to experience.”

The Police Unity Tour, a non-profit organization, raises money for the national philanthropy organization in order to cover financial responsibility for survivors of fallen police officers, allowing them to have transportation to the candle vigil and ceremony.   The officers are fundraising and asking for donations to help cover their $1,700 admission fee to enter the tour. The officers have a goal to raise $2,000. Currently, between the pair collectively they are more than a quarter of the way to their goal.

On March 10, the officers will host an all- you-can-eat-and-drink at Barnaby’s in West Chester from 6 to 9 p.m. The $25 entrance fee will also include door prizes and raffles. Tickets can be purchased at the doors. (Must be 21 and old
er).

The officers are talking to local businesses and asking for their support by donating items for the raffle.

Marilyn Schier, a dispatcher of Public Safety, donated paintings for the officers to raffle off.  Officer Daniel Irons donated two of his Phillies tickets to one game. Mell Josephs, Director of SSI donated a raffle basket valued at $125. Chief Michael Bicking and Lt. Ray Stevenson, among other employees of Public Safety, have been supportive and also donated money towards the cause, the officers said.

Before Davila returned to DPS this past November, he asked for permission to have the time off to participate in the tour. Chief Bicking granted this and Davila rejoined Klein as partners.

“Definitely want to support Jose and do everything I can to keep up with him (during the bicycle tour),” Klein explained. “We’re hoping to do this for years to come.”

Klein said he thought it would be neat to represent from the university. Alecia is an alumna of WCU. Davila is optimistic in having more Public Safety police officers join him and his partner next year.

The program began in May 1997 when Officer Patrick P. Montuore, of the Florham Park Police Department, organized the four-day event. It began with 18 riders completing the 300-mile route to D.C. He aimed to bring public awareness of the police officers who have died in the line of duty and to honor their sacrifices, according to the website www.policeunitytour.com.    The first event raised $18,000 while the continued success from last year brought in $1.325 million to the memorial fund. Davila will return to the memorial once again, however this, along with Klein, is the first time they will be participating in the bike route.

Davila did not believe he would see the comradery again after he served as a Marine from 1999 to 2007, but both officers expressed the brotherhood they experience in law enforcement.  After his first Police Unity Tour in 2008, he said you do not realize the brotherhood in law enforcement. Davila says the tour is something to see “at least once in your lifetime as a police officer” and for others who are interested and want to show their support.

A note from the university police officers: thank you for your support in the ride. It means a lot to us as we embark on this journey to honor those who sacrificed their lives to keep others safe.

Ginger Rae Dunbar is a fifth-year student majoring in English with a minor in journalism. She can be reached at RD655287@wcupa.edu.