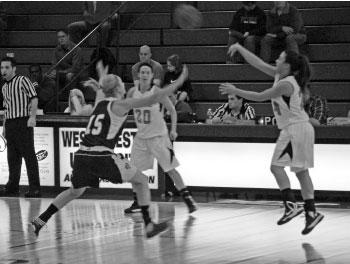 It was the Rams’ first loss of the season, ending a winning streak that had spanned the team’s first three games. Cal also entered the game at an identical 3-0.

West Chester came out with intensity, and led the game 7-6 after a few minutes. But when Cal took the lead from them shortly thereafter, they never looked back and the Rams failed to mount a successful comeback.

In the second half, WCU managed to trim the deficit to 14 points, after being down by as much as 21. Cal didn’t let them get any closer, though, playing excellent defense and answering West Chester with big shots of their own.

Lennon, a senior forward, led the Rams all game with her accurate shooting and stifling defense. She went 9-for-15 for 22 points, and recorded nine rebounds, four assists, and four blocked shots. Those four blocks brought her to 216 in her career, moving her past 1999 graduate Gina Tophoney for first place all-time.

Freshman guard Jasmen Clark, who has started each of West Chester’s first four games, scored 14 points, the most for her so far this season. She added three assists as well. Senior forward Ambreelinne Ortman registered six rebounds in addition to her nine points.

California’s top two scorers, Stephanie Michael and Ashley Hines, were too much for the Rams to overcome. Michael went 8-for-17 and scored 21 points, including 3-for-7 from three-point range. Ashley Hines scored 18 points and grabbed an astonishing 14 rebounds off the bench. Emma Mahady added 15 points, shooting 7-for-14 from the field.

Even though they dropped their first PSAC contest of the 2012-13 season, it still promises to be an intriguing year for the Lady Rams, who return three starters from a team that made it to the first round of the NCAA Tournament a year ago, where they were eliminated by Edinboro, the same team that had beaten the Rams in the PSAC semifinals.

Lennon, an experienced forward from Lansdowne, Pa., will be a key force on both sides of the ball. Also returning from last year’s starting lineup are Ortman, a powerful interior presence from Millville, Pa., and senior guard Meghan Kerrigan from Downingtown, Pa., who led the entire PSAC with a 2.6 assist-to-turnover ratio last year and led the team in minutes played.

Making up the rest of the starting lineup are Clark, a top prospect from Temple, Pa. who has impressed in her first four games, and junior guard Paige Elliot, a talented scorer from York, Pa. who scored 21 three pointers and averaged 6.4 points per game last year despite not starting a single one.

Before losing to California (Pa.) on Saturday, the Rams had started the year with a modest three-game winning streak. They swept the Carol Eckman Memorial Tournament, defeating W. Va. Wesleyan, 90-72, on Nov. 17 before beating Philadelphia University, 73-59, a day later. The following week, on Nov. 26, WCU traveled to Philly to face the University of the Sciences, and true freshman Clark nailed a three-pointer at the buzzer to seal an exciting 62-59 win which at the time had preserved the team’s undefeated record.

The Lady Rams played again on Sunday in a game that ended too late for this issue. Look for results on the university’s athletic website to see if the team managed to capture its first PSAC win. West Chester will then host Mansfield next Saturday in yet another in-conference matchup.