Beyond the blackboard: Dr. Marinescu 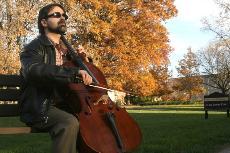 The American dream is alive and well in Dr. Ovidiu Marinescu. He came from Romania to the United States with little more than $20 in his pocket and earned a masters degree and a doctorate in musical arts. He became a professor at West Chester University and still performs as a cellist in his spare time.

Ovidiu Marinescu was born in 1965 during the Communist Era, but despite the communist repression, Marinescu obtained his bachelors degree in cello performance from the Bucharest Conservatory.

Marinescu came to the United States in 1991, shortly after the fall of the Communist government. He obtained his masters degree at the University of Wisconsin in Milwaukee, and his doctorate in musical arts at Temple University.

When asked why he became a teacher, Marinescu said, “I enjoy different aspects in music, I love sharing my passion and I’ve got to make a living.” He loves all his classes for different reasons and he’s excited to do what he enjoys. “I love the students,” he added, “they are good people and supportive of one another.”

Heather Siegfried, a music education major, has had Marinescu as a conductor and string quartet coach. “He’s not only a teacher, but he’s a friend and my favorite professor here,” Siegfried said “He’s an amazing conductor and the way he knows the pieces is phenomenal, rarely does he have to stare at his score.” Siegfried also added that Marinescu never wastes time in rehearsals and the orchestra gets so much accomplished under his baton.

The WCU Symphony made a sold out debut at the Kimmel Center in Philadelphia under his leadership. He also led the orchestra on its first European tour and organized the orchestra’s participation in the Catania International Festival in Sicily, Italy.

“I don’t practice a lot,” Marinescu said, “I am efficient in my work.” His mind works in patterns and numbers. “Everything is a pattern that can be memorized in music,” he said.

According to his Web site, marinescu.com, he combines a precise technique with great musical inspiration and is known for his powerful interpretations of orchestral works by Tchaikovsky, Prokofiev and Stravinsky. He was invited to record Tchaikovsky’s fifth symphony and Marche Slave with the Russian Philharmonic Orchestra in Moscow.

Marinescu said that one of his greatest achievements was being invited to perform at Carnegie Hall in New York City for the Romanian president on an official visit to the United States. He has also performed with the New York Chamber Symphony and the Moscow Chamber Orchestra.

Aside from conducting the WCU symphony, Marinescu finds time to direct the Wilmington Community Orchestra and has served as the music director of the Manalapan Orchestra in New Jersey.

In addition to his conducting experience, Marinescu has several CDs available on his website including “Fiesta Latina” and “Hopelessly Romantic,” a recording of the Adirondack Ensemble in which he plays cello.

Students can watch Marinescu in action at no cost on Nov. 19 when he conducts the WCU Symphony Orchestra in Swope Hall.