No. 2 WCU remains perfect with convicing win over No. 14 Merrcyhurst 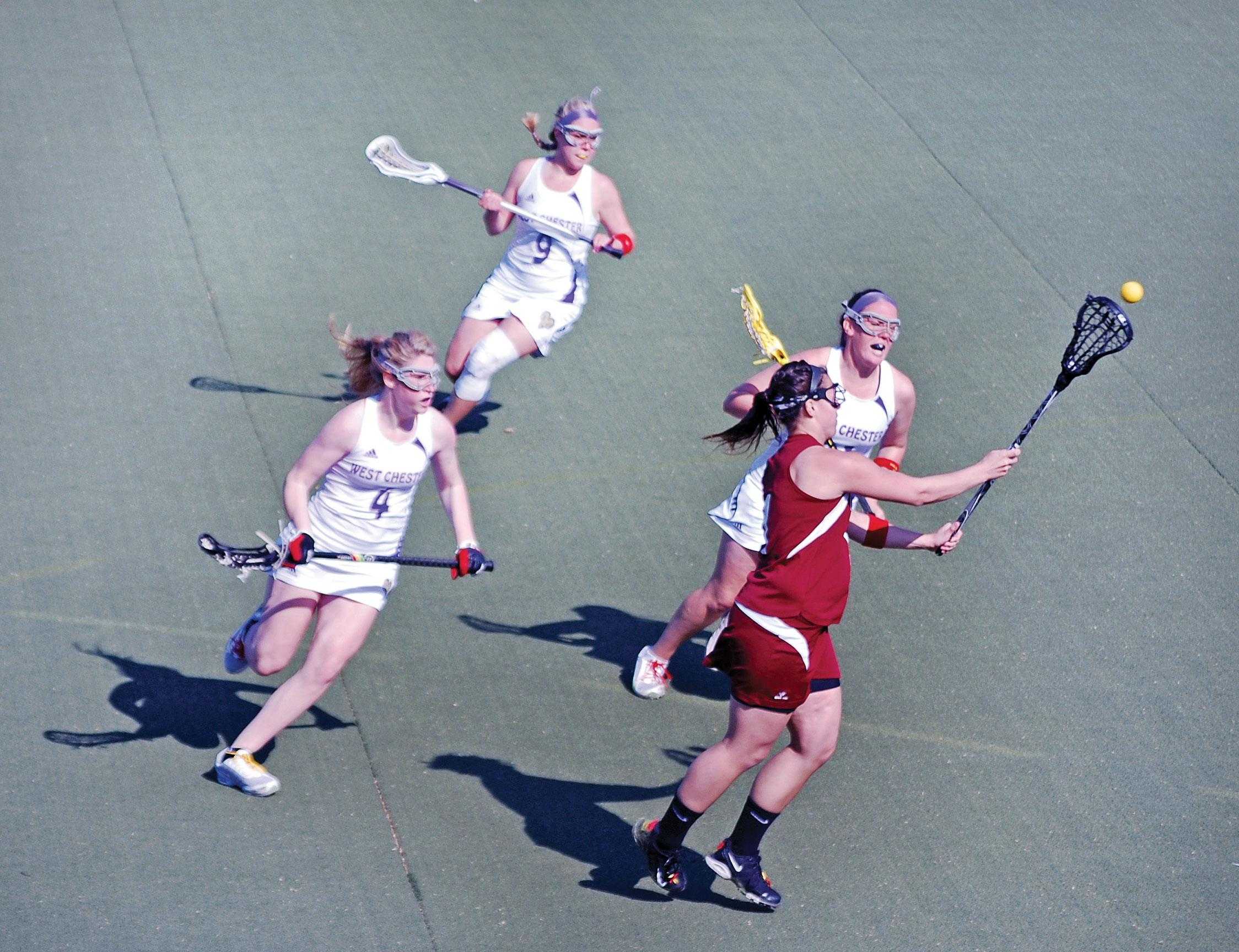 The West Chester University Golden Rams women’s lacrosse team continued its impressive start to the season with a convincing 19-5 victory over visiting Mercyhurst Saturday afternoon. The victory extends their win streak to eight games, keeping them tied with rival IUP for first place in the PSAC.

The Rams ripped off 10 goals in the first half, beginning with three goals from Hannah Cowan, Jordan Heidelbaugh, and Lauren Glassey respectively, all within one minute of another.

Glassey scored her second goal in a row and 18th of the season in the 21st minute of the game. Tori Dugan followed that with a goal of her own, stretching the lead to 5-0.

Mercyhurst was finally able to penetrate the Rams tenacious defense, when Anna LeGrett scored her 17th goal of the season to put the Lakers on the board, making it a 7-1 game.

West Chester responded with three goals of their own to end the half.  Brittany Long scored her 9th of the season and only 20 seconds later Theresa Giunta converted making it 9-1.  Nicole Pyle finished off the half with a goal assisted by Dugan, extending the Rams lead to 10-1 heading into the locker room.

Dugan wasted no time to continue the scoring barrage, scoring only 40 seconds into the second half giving the Rams an 11-1 advantage.

Cowan finished off her hat trick shortly after, off an assist from Glassey, her second assist of the game.

Dugan followed that by finishing her own hat trick, with her 18th goal of the season, extending the game to 14-1.

Only two minutes later Pyle scored her 21st of the season assisted by Dugan, giving the Rams a 15-1 lead.

West Chester cranked out five more goals past the Mercyhurst goalie, before the Lakers were able to stop the bleeding.  Erin Eckert scored two in a row giving the Rams a 19-1 lead.

The Lakers scored four straight goals to end the game, but it was too little too late as West Chester cruised to a 19-5 victory.

Co-captain Theresa Giunta said, “We have been playing really hard and with confidence. We have been patient with the ball and in control of the game. We are on a roll!”

Goalie Jess Henderson allowed one goal over 50 minutes of play and recorded two saves. This caps off the Rams 8th straight win.

Earlier in the week the girls beat East Stroudsburg with an overwhelming 24-5 and followed that with a 17-5 victory over visiting Gannon.

Pyle recorded five goals against East Stroudsburg and Jamie Dolan and Sarah Dennison each recorded a hat trick in the win.

The Rams will visit Shippensburg this week before hosting Rollins College and Slippery Rock University this weekend.