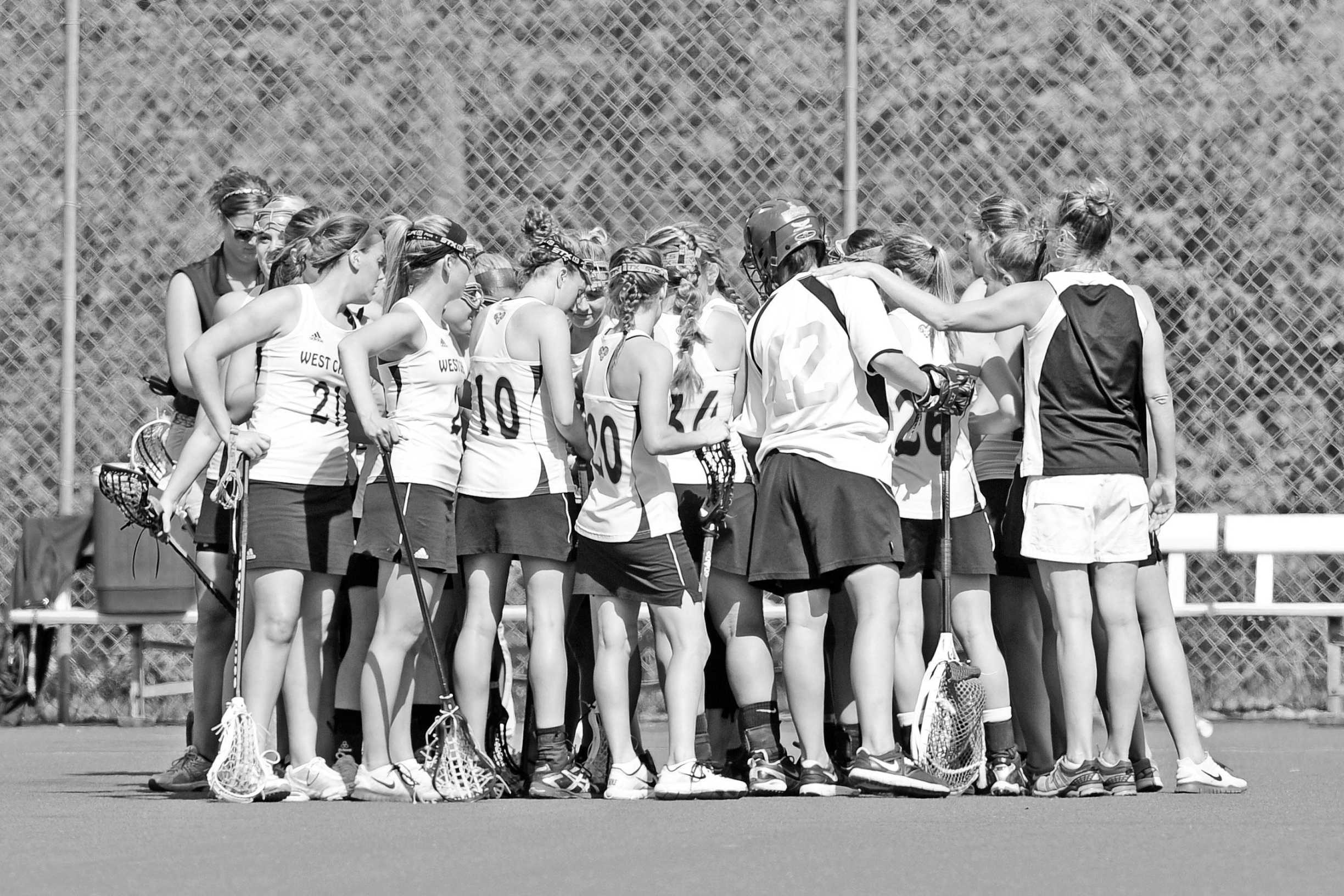 The Golden Rams women’s lacrosse team ended the regular season with back-to-back wins over C.W. Post, 18-15, and Kutztown, 17-13, to sail into the PSAC semifinals tied for first alongside rival Lock Haven.
West Chester (14-2, 9-2 PSAC) implemented a come-from-behind victory initiated by Jamie Dolan over No. 5 C.W. Post (12-2, 6-0) to halt their eight-game winning streak, in the final home game, non-league match of the season on Tuesday afternoon at Vonnie Gros Field.
The two teams put up a combined 21 goals in an explosive second half in a race to victory, with West Chester coming out on top for the first time since the 2008 national championship game.
Dolan initiated a seven-goal run, scoring six goals on the day, to erase a 12-8 deficit with 21 minutes remaining in the second half.
Tori Dugan secured seven draw controls, nine straight for West Chester, while Dolan put up four goals in an eight-minute span to improve to 15-12 with 12 minutes to go.
The Rams put up the first three goals of the game, to which the Pioneers responded with six unanswered goals. Dolan added her first of the game which still left West Chester with a 7-5 deficit at halftime.
With just one tally from Jacki Patterson, the Pioneers added to the score taking an 11-6 lead with 24 minutes remaining.
Dolan and Dugan led the Rams to regain the advantage, finishing with six and three goals, respectively. Oczkowski and Patterson also finished with hat tricks, while Theresa Giunta, Stacey Pellechia and MacKenzie O’Keefe made up the difference. Dugan also recorded a career-high 14 draw controls.
Jess Henderson registered nine saves for the win.
The Rams transferred their momentum to their final regular season game of the year in a 17-3 win over Kutztown on Thursday afternoon at Keystone Field.
“We were using that game as a way to really perfect our plays and work on things we needed to,” Dugan said.
Dugan came up big again with four goals, while Patterson added a hat trick to catapult West Chester to its final victory of the regular season, tying for first place with Lock Haven. While both teams automatically earn a first-round bye into the semifinals, the Lady Eagles will take the top seed in the postseason tournament due to their 12-9 triumph over the Golden Rams two weeks prior.
West Chester and Lock Haven have battled in the conference title for the past six seasons.
Against Kutztown, the Golden Rams took another early lead, 8-3 by halftime, with nine unanswered goals in the second half to solidify the 17-3 triumph.
Oczkowski, Pellechia and Jacqui Burke each added two tallies to the final score.
Henderson, who played the first 51 minutes, made six saves, while Kelsey Sward took over the remainder registering one save.
“We are preparing for the PSAC’s the same way we prepare for every other game,” Dugan said. “The fact that we have played every team that we could potentially face helps in our preparation. We have more time than we usually do to prepare so we are watching more film and really breaking things down.”
West Chester could potentially face their rival Lady Eagles for the championship. While the Rams boast a better record than Lock Haven, the Lady Eagles won in the battle two weeks ago when the two locked horns.
“We would love to see Lock Haven in the championship,” Dugan said. “Last year they beat us on our field for the PSAC Championship game and we want to do the same thing to them… The seniors on our team have never won a PSAC championship so we want to do it for them more than anything.”
Although they may face the only two teams who defeated them in the regular season, the Golden Rams said they’re confident about their future.
“The unique thing about our team that will ultimately push us to be PSAC Champions is that we want that trophy more than anything–Lock Haven has stripped us of that title for the last three years,” Patterson said. “We work so hard in pracrie and are so dedicated to each other and to the same goal, that at this point, nothing can or will stop us.”
The team looks forward to fighting for the championship game next week, setting out for their goal of a title.
“Beating top 10 teams like LeMoyne and CW Post were huge confidence boosters and eye openers for everyone,” Dugan said. “We always have been and always will be the underdogs but we don’t mind that. We love having to work to prove ourselves to everyone.”
While the Golden Rams keep their sights focused on their goal, the team reflected on their run this past season.
“Our team this year is unlike any team I have ever been a part of before,” Dugan said. “We have always been a close team which helps our chemistry on the field. We are very resilient and both the wins and losses that we’ve had this year have shown us how good we can be when we play together and with heart.”
Patterson reiterated Dugan’s sentiment.
“I think I speak for all the senior players when I say that the season has been one of a kind,” Patterson said. “Although we have had some bumps in the road on our journey, this year has been such a test of our commitment to our team and how much hard work we are willing to put in it reach our goal.”
The Golden Rams enter the semifinals on May 4 at Lock Haven and will face either Bloomsburg, IUP, Gannon or Mercyhurst.
Patterson expressed an optimistic final reflection on the season.
“As a co-captain, I couldn’t be more honored and proud of these girls and what we’ve accomplished and what we will continue to accomplish.
Brynn Dougherty is a fourth-year student majoring in economics and finance with a minor in journalism. She can be reached at BD670913@wcupa.edu.