“The Vampire Diaries” premiere lives up to hype 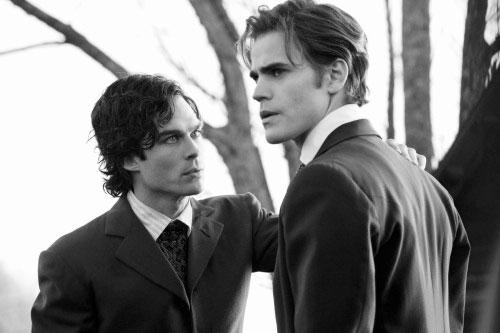 After the shocking Season three finale of “The Vampire Diaries” where (spoiler alert) main character Elena Gilbert died and turned into a vampire, the writers behind the hit show had huge hype to live up to.

The cliffhanger ending was immediately addressed as Elena woke up to the news that Stefan, her vampire ex-boyfriend, saved Matt first, after Matt drove his car off of Wickery Bridge-a direct parallel to how Elena’s parents died and how she originally met Stefan. However, as Damon, Stefan’s bad-boy, vampire older brother who also loves Elena, pointed out, Stefan did not save her. Elena died and needs to feed to complete the transition to become a vampire. Elena begins to experience symptoms of her transition: heightened emotions, sensitivity to light, dislike of food, and the remembrance of events she had been compelled to forget, particularly a confession of love from Damon. Meanwhile, Bonnie, the town’s resident witch, deals with villain Klaus inside of Tyler’s body and finding a way to turn Elena back to human.

With the introduction of the Founders Council on a hunt for the recently revealed vampires, they capture Caroline and Rebekah, and eventually Stefan and Elena, where the latter three are taken to Council leader Pastor Young’s ranch where they all are separately locked up in converted stalls. Caroline is saved by Tyler, and begins to passionately thank him in the woods until she realizes it is Klaus in Tyler’s body. Shout-out to Michael Trevino who plays Tyler for completely capturing Klaus’ villainous personality. His performance was amazing to watch. Through magic, Bonnie begins to help Elena and bring her soul back to the ‘other’ side until the ghost of her grandmother, Grams, forces her to stop, telling Bonnie she has meddled with too much dark magic.

In the most romantic scene of the premiere, Stefan begins to tell Elena that she should have fed and completed the transition earlier, like Damon wanted. Through the stone walls separating the cells, Elena tells Stefan that the reason she and Matt were on the bridge was because she had to pick between the brothers and she chose Stefan. While viewers knew this from Elena’s phone call to Damon in the finale, her statement brought Stefan, and many viewers, to tears as the two declared their love for each other and Elena said no matter if she lives or dies, the decision to come home to Stefan was the “best decision [she] ever made.” Even Rebekah, who caused the accident on Wickery Bridge, was affected by Stefan and Elena’s selfless love.
Serious kudos to both Nina Dobrev and Paul Wesley who play Elena and Stefan respectively. They completely captured the emotion of their characters and their undying love for one another. As an avid viewer, it was perfect.

Even more perfect was Elena finally feeding. Rebekah works with Stefan to kill a guard so Elena can feed on human blood and complete the transition. With tears streaming down her face, seeming to symbolize her goodbye to humanity, Elena touches a smear of blood to her lips, officially becoming a vampire.

At the same time, Damon is begrudgingly working with Matt to try to save Stefan and Elena from Pastor Young and the rest of the council. Unfortunately for Matt, Damon continues to hurt him since Damon feels that it should have been him. Before Damon can kill Matt, new vampire Elena pounces on Damon yelling at Damon to leave Matt alone. Our first glance of vamp Elena is exciting until she and Damon talk about the “what if?” What if it was Damon, not Stefan, at the bridge? Damon admits he would have saved Elena first and she would still be human, something Damon wanted desperately for Elena. The scene seemed foretelling of the romantic future of Damon and Elena, a romance that seems bound to happen this season.

While Elena deals with her vampirism, Bonnie attempts to extract Klaus from Tyler’s body after Klaus threatens to kill Tyler. After a warning from Grams earlier about using dark magic, Grams reappears and seems to be taken over by Bonnie’s powerful magic. This scene leaves the audience with unanswered questions but we do learn that Klaus is back in his own body and prepares to leave Mystic Falls to make a hybrid army but is stopped by an angry Rebekah. The sibling pair quarrels and a furious Klaus declares Rebekah is not his family, breaks her neck and storms out.

In a scene reminiscent of the Ferris Wheel scene from Season two, Stefan and Elena sit atop the roof of the Boarding House where an honest Stefan tells Elena he wishes she was not going to feel pain and lust for blood. Elena responds that it is still a life and she gets to be with him forever…if she wants. Just before the sunrises, Stefan gives Elena a daylight ring and places it on her ring finger, completely suggestive of a proposal. Then in a shocking ending, Pastor Young locks the Founders Council in his home where he admits the vampires are probably planning their revenge but that they are only the beginning…and goes on to unhook the gas line and blows up the house, seemingly killing everyone.

Overall, Season four opened in a fantastic way, answering questions from the previous season finale all while setting up for a new major story arc with the ominous words of the vampire hunting Pastor on loop:”It’s only the beginning.” There were some lingering questions from the premiere. What exactly happened with Bonnie and Grams? Is Klaus gone for good? How is Elena going to handle her new vampirism? Where is Katherine and why won’t she come back? With the upcoming introduction of a new vampire hunter, Elena as a baby vamp, and Bonnie’s tampering with dark magic, it seems that the problems of the characters are just getting started.

Victoria Holt is a second-year student majoring in communication studies. She can be reached at VH758202@wcupa.edu.