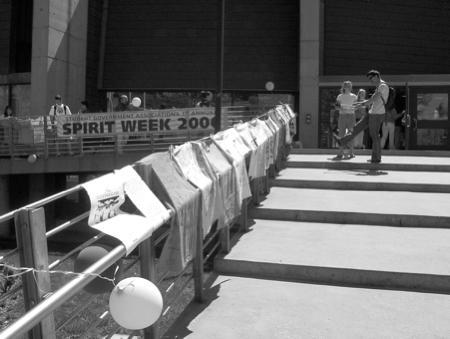 Last Tuesday and Wednesday, as many of us enjoyed the nice weather, students and faculty may have noticed T-shirts hanging up on a clothesline outside of Sykes and in the academic quad. Over 200 bright and colorful T-shirts hung and hopefully they caught your attention enough to read them. The T-shirts are a part of the Clothesline Project, as a visual display, which bears witness to violence against women. The project displays shirts designed by women survivors of violence and their families and friends. The shirts hang side-by-side to “Break the Silence.”

The Women’s Center at WCU, under the direction of Robin Garrett, has participated in the project since 1998. A volunteer at the center stated that the Clothesline Project is what drew her to the Center. She started thinking about all the women that she knew that had been abused.

There was silence as people, mainly females, walked through the quad reading the shirts. When reading the T-shirts, a person can become very emotinal. There is happiness in the fact they have never experienced violence but sadness for all the women that have. The colors of the T-shirts represent the different types of violence. For example, white represents the women who have died of violence; red, pink or orange represent women who have been raped or sexually assaulted, and blue or green represent women who are survivors of incest or child sexual abuse. WCU students made shirts as did women from the domestic violence center in West Chester. Some of the T-shirts were even created by children.

If you are interested in more information or becoming apart of the Clothesline Project you can visit their Web site www.clothesline.org or visit the Women’s Center, located on the second floor of Lawrence.