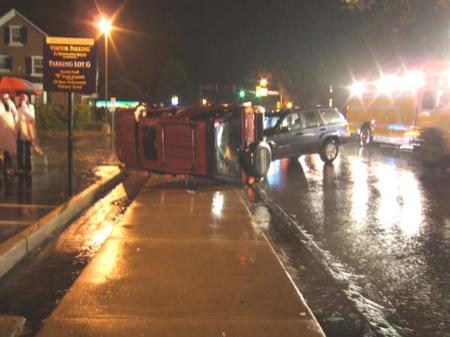 A loud crash awoke West Chester residents around 1:45 a.m. on the morning of Saturday, April 22. A two car collision occurred on High Street in front of Phillips Memorial Building. Joy Adams, the first to report the accident, said, “It appears that the Cherokee was north-bound and the Asuzo was south-bound, possibly turning left into the Faculty Lot.”

The Jeep hit the Suzuki and caused it to flip onto its side. The driver of the Cherokee jumped out and a young man hoisted himself out of the broken window of the Suzuki. Three others were trapped inside and were helped out by a rescue crew. They were all in stable condition.

A pedestrian, identified as first-year student Rachel Lewis, was struck and taken to the hospital in an ambulance.

Sharon Adams, an eyewitness said, “A guy broke out in an outrage in the back of the lot.” Officers responded to the man and contained him.