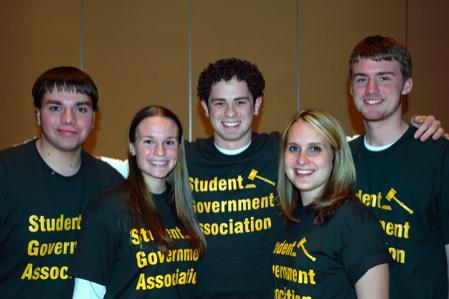 In a sweeping victory, announced on April 21 by Student Government Association (SGA), Kyle Mullins (brother of Mullins Mullins) and his entire ticket-Tracy Pedron, Susan Malone, William Christman and Matthew Holliday-won seats on SGA’s executive board. The majority of the 1,100 voters overwhelmingly chose Mullins and his running mates to head the most powerful student organization on campus. Mullins received 788 votes and beat out his presidential contender, SGA vice-president Amy Rae by 452 votes. “I became president-we were elected to the executive board-because of our friends,” Mullins said, “The credit lies completely within our friends. Over 700 friends voted for us. And it was truly an honor to run a campaign and run along side a wonderful group of individuals-Tracy, Susan, Matt and Billy-are an incredible group of talent and fun and humor and determination.”

Mullins’ ticket-members each received over 700 votes. Susan Malone ran unopposed. Parliamentarian-elect Matthew Holliday said, “I was very happy to see that we were able to get so many students to turn out for the election. I was surprised by the final vote count, but I feel that my opponent did an excellent job campaigning and I feel that through this election, student government has reached out to some people who never even knew it existed.”

When asked what he had learned through the election, Mullins responded, “We learned who our real friends are. I learned that money and fancy tactics are not always the key to success-that grassroots can truly still be the way of politics.”

The new executive board will be appointed this Tuesday at 7 p.m. and will head SGA until next April when another election will take place.