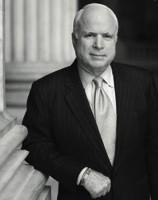 With the Republican National Convention coming to a close last Thursday in St. Paul, Minn., there is a new front-runner in the race for the White House as Republican Nominee John McCain now holds a 2.7 percent advantage over Barack Obama. In RealClearPolitics.com’s average of polls conducted by nine national media outlets and polling agencies, McCain holds a 47.7-to-45 percent lead over Obama. Additionally, the Republican senator from Arizona leads Obama by 10 percentage points in last week’s USA Today/Gallop Poll. Last week marked the first time in this campaign since April 13 that McCain outpaced the Democratic nominee.

The Republican party spent a majority of their convention introducing Vice Presidential nominee Sarah Palin to a base of voters until recently, remained hesitant to embrace McCain, while simultaneously telling of McCain’s heroic service while serving as a Prisoner Of War in Vietnam.

Recent polls suggest the strategy of telling McCain and Palin’s biographies in lieu of extended policy rhetoric has paid off.

Obama held a slim but consistent lead most of the summer, highlighted by a 6.6 percent advantage following the Democratic National Convention in Denver which concluded August 28, with the Illinois Senator delivering an impassioned speech to 70,000 supporters at Invesco Field at Mile High. However, it has been the McCain Palin ticket that has carried the post convention momentum into the final 50 days leading up to Election Day.

While Obama still holds a resounding advantage amongst college students, McCain has carried the white middle class vote in recent weeks. In a survey conducted by The Quad on 8/28, Obama led McCain 64 percent to 13 percent, with 19 percent undecided. Obama trails McCain by a 55-37 percent margin among white voters according to an Associated Press poll released Friday.

Polls are likely to fluctuate each week until election night, November 4.

Matt Lombardo is a fourth-year student majoring in communication studies with a minor in journalism. He can be reached at ML606516@wcupa.edu