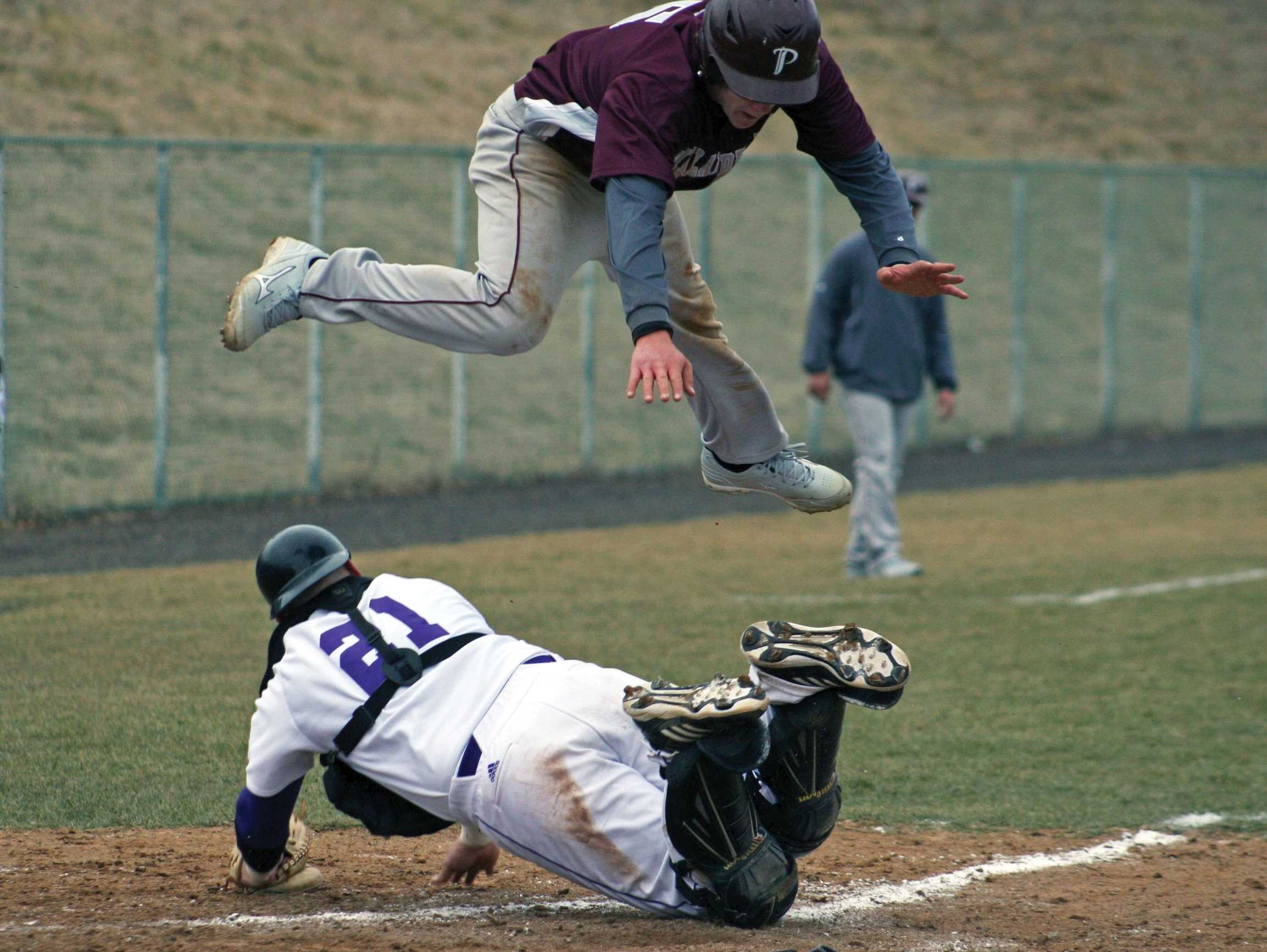 Amid light snow flurries Saturday, West Chester’s baseball team got its own flurry of  offense as they rapped out 22 runs in their home opening doubleheader against Philadelphia University, with a 14-2 win in the first game and an 8-8 tie due to darkness in the nightcap.

West Chester benefited from two huge innings in the first game, as they scored seven runs in the fourth and another six in the fifth inning. The Golden Rams scored their 13 runs in those two innings on 10 hits, but also took advantage of errors and command issues from Philadelphia’s pitching.

“I think offensively we had some really good at bats in there at times, we took some pitches and drew some walks and got some free bases that way,” head coach Jad Prachniak said. We were locked in offensively-running the bases, at bats. We did a good job.”

West Chester did not score for the remainder of the game, but their 12-run lead was more than enough to earn them their first win of the young season.

Centerfielder Mike Raimo finished with two hits in three trips, and also scored twice and drove in three from the leadoff spot. Jack Provine also had three RBI, two runs, and two hits in his 4 at bats.

On the hill, ace righty Joe Gunkel picked up his first win of the season, as he tossed all seven innings and allowed just two runs-both in the first inning. After the first, he allowed just one hit for the remainder of the game.

“They scored two in the first off him, but he settled in,” Prachniak said. “Even in the first [inning] I thought he was throwing strikes. They had a couple of hits and they moved some guys along and rove some guys in on outs, but it was a good Gunkel outing. Kind of his standard outing.”

Despite the cold temperatures, Gunkel was able to not only command his full arsenal of pitches, but also have significant movement on them.

“[His breaking ball] was pretty sharp, he was able to throw it for strikes. He still relied heavily on his fastball I’d say today, but he did a good job mixing there and threw some sharper ones later in the game,” Prachniak said.

Only one of Gunkel’s runs was earned, and he struck out four while walking just one in his seven inning complete game.
The night game, which was a full nine-inning game, saw a similar offensive explosion for the Rams they put up eight runs, but Philly U matched their every move, plating eight of their own.

It was a back-and-forth match, as West Chester took two different leads in the game-4-0 in the second and 8-6 in the sixth-only to have them erased by big innings from Philly U in the fourth and seventh.

Philadelphia was able to plate six runs off righty Fred Breidenbach in the fourth inning, doing so on seven hits and with the help of a fielding error at third and a balk. Despite the shellacking, Breidenbach was throwing strikes, and was able to rebound and throw two scoreless innings after the six-run frame to keep West Chester in the game.

“That’s a good reference point, there’s not many guys that can straight face a six-run inning and go put up two zeros after, and that speaks to his maturity,” Prachniak said. “He knows how to compete, and even in that inning they hit some balls pretty hard and also hit some balls not so hard, but he does a good job keeping things in perspective and keeps throwing strikes. Ultimately I think things are going to work out fine for him, and they did later in that outing as well.”

Bredinbach exited the game having allowed six runs (five earned) on ten hits in six innings of work. He walked two, struck out three, and earned a no-decision.

Matt McCallister came on in relief, and allowed two runs in the seventh to tie the game, but did a tremendous job escaping further trouble. Philly U had the ingredients for a huge inning, as they had the bases loaded with nobody out after scoring those two runs. But McCallister induced a lazy fly ball to left, and then got the call at first on a very close double play ball to end the inning.

McCallister pitched the eighth and ninth, allowing baserunners in scoring position each inning, but escaped unscathed both times. West Chester had chances to score in the final frames as well, but could not capitalize on their chances.

The game ended in a tie due to darkness, and will not be made up. It is a frustrating finish for both teams, who could have easily won the game with better pitching.

At the dish, Raimo was 1-for-4 with two RBI, and Speckhardt, Rob Lessig, Justin Lamborn and Nick Bonadies each drove in a run apiece.

The win in game one ended West Chester’s three game losing streak to start the season. They will be at home again for a doubleheader against University of the Sciences on March 10, with first pitch scheduled for noon and 2:30 p.m.