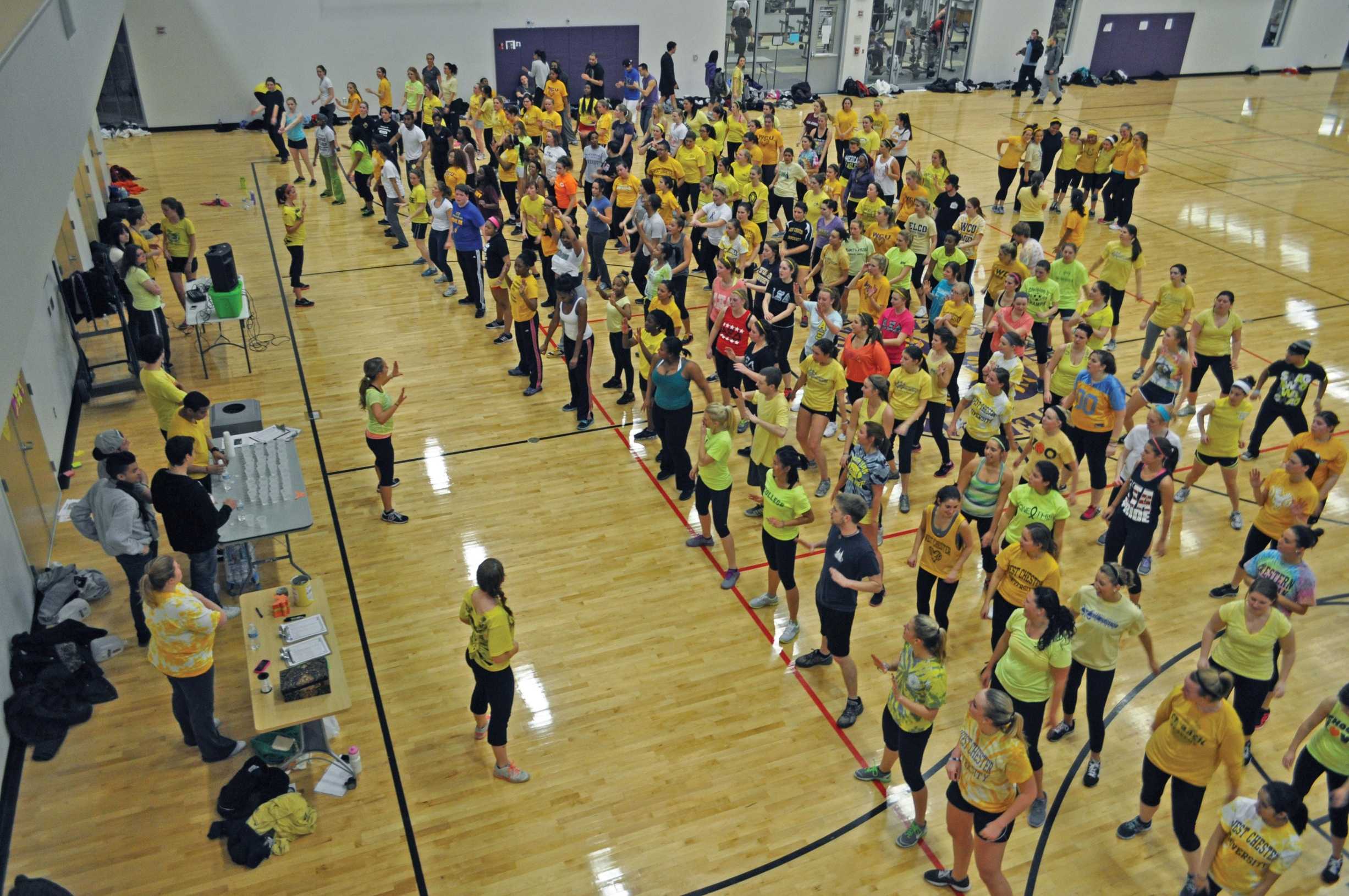 Monday evening from 9 to 11 p.m., more than 200 students arrived in the basketball court of the new Recreation Center ready to zumba. Students strutted their yellow clothing to support the event’s theme, “Celebrate Life.” Their goal  was to raise awareness for suicide prevention.

Elle Berry-Johnson, a fourth-year athletic training and communication studies major with a minor in criminal justice, and Miss WCU 2013 Contestant, partnered with the Recreation Center to organize the Zumbathon. Berry-Johnson invited West Chester’s service societies, the Friars and Abbes, and all the sororities and fraternities on campus, along with the school’s radio, WCUR 91.7 The Curve, who deejayed the event. In fact, as well as dancing off calories and giggling with friends, sorority sisters and fraternity brothers received community service hours for attending the Zumbathon.

Zumba instructors, Sami, Kayla, and Erin each teach classes in the Rec Center, and took turns leading the routines for the Zumbathon. Students lunged, shuffled, and shook to songs like Pitbull’s “I Know You Want Me” and Macklemore’s “Thrift Shop.”

The event was held in memory of those lost, which for Berry-Johnson, included Mathew Pattley, of Trenton, NJ who served in the Pa. National Guard. Berry-Johnson also mentioned Crystal Krier, of Tullytown, Pa., whose name lives on with a group of Volunteers for the American Foundation for Suicide Prevention who call themselves “Crystal’s Angels.” Participants hung pictures of their own loved ones on a memory wall Berry-Johnson designated inside the basketball court.

Donations were accepted, though not pushed, and all proceeds benefited QPR Institute, which offers suicide risk assessment and risk management training, as well as a crisis hotline.
Finally, at the end of the evening, Berry-Johnson handed out pledges to all participants and read the inspiring words aloud. The pledge, written by Elana Benitez, proclaimed:
“I promise to love myself, but not just to love, but to honor. I promise to always look on the bright side, and have a hunger for happiness. I promise to ask for help when I need it, and not be ashamed. I promise to not put myself down, but to encourage myself to always be better. Finally I promise to respect and appreciate the life that I have been given.”

Joy Wilson is a third-year student majoring in communication studies. She can be reached at JW794401@wcupa.edu.